The National Veterinary Professionals Union began taking shape in 2017. Not everyone agrees it is a good thing.

Can a grassroots movement to establish a union for veterinary professionals gain widespread support?

For more than a decade, veterinary technician Morgan VanFleet watched with growing concern as she and her colleagues struggled to make a living in the job they loved. Low wages, meager benefits, and high employee turnover left many support staff feeling burned out, unappreciated, and unable to make ends meet, yet practice owners routinely refused to acknowledge their concerns or take steps to improve work conditions.

The answer, VanFleet concluded, was a union that would work on their behalf. In February 2017, VanFleet, who had worked as a technician in Washington and Oregon, established the National Veterinary Professionals Union (NVPU) in an effort to draw attention to the plight of overworked, underpaid veterinary staff. “It really struck a nerve,” said VanFleet, who recently left veterinary medicine to work as an RN and is no longer associated with NVPU. “People got excited about it very quickly. Dozens of people told me that they always wanted something like this but never knew where to start.”

The establishment of the NVPU was big news among veterinary employees and practice owners. But could such an organization really enact change?

In August 2017, employees at VCA San Francisco Veterinary Specialists began talking among themselves about unionizing, said veterinary assistant Katy Bradley, who was among the first to broach the idea. Bradley came from a union family—her grandfather had been a member of the International Longshore and Warehouse Union (ILWU), so she called him for advice. A month later, the ILWU reached out to Bradley to gauge how serious she and her coworkers were about forming a union. If they truly wanted to unionize, ILWU reps told her, they would be happy to assist.

“We started discussing a union because we felt we weren’t being heard,” Bradley said. “There were multiple issues going on at the hospital, along with what we felt was a lack of accountability. The response from management was always, ‘Put it in an email and we’ll see what we can do.’ We felt a union would give us a voice.” 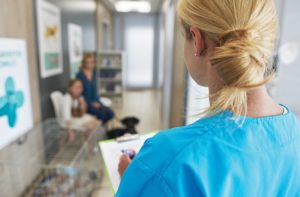 THE COST OF BUSINESS. Corporate owners say that the cost of worker demands will result in an increase in fees, reduction in staff, and other measures. Photo credit: shutterstock.com/gpointstudio.

Zehna believes unionization will help achieve a number of important goals for office support staff, including:

This is a particularly important issue because a survey by the National Association of Veterinary Technicians in America found that full-time technicians reported an average salary between $15 and $20 per hour. “Well-paid veterinary technicians are only slightly above the poverty line once income taxes are considered,” the survey authors said.

“We are empowering veterinary employees to take control of their working conditions, their rights in the workplace, and their professional advancement,” Zehna explained. “Change and challenge to the status quo is always scary. We hear from many practice owners who are excited for this change. However, corporate ownership has been very difficult from the onset of these efforts, and continues to push back through a variety of channels.”

The initial push for unionization understandably made many practice owners wary. “Our position is that we would rather have the dialogue directly with our employees than have a third party like a union, which may have competing interests to our employees, intermediate that dialogue,” said Doug Drew, president, U.S. Animal Hospitals, VCA. “We have committed to bargaining in good faith with the ILWU as it concerns VCA San Francisco Veterinary Specialists.”

Many questions remain regarding the effects of unionization on individual practices. Corporate owners have expressed concern that the cost of worker demands will result in an increase in fees, reduction in staff, and other measures.

“Speaking in general terms, if the cost of operating a hospital increases it would be natural for the hospital to raise prices to cover any increase in operational costs,” observed Drew. “Or it might be necessary for the hospital to reduce the number of team members, as has happened in other industries where wages went up faster than expected because of increased minimum wages. Animal hospitals typically do not have high margins after capital expenditures and taxes are taken into account, so it would be natural for owners of hospitals to try to at least offset additional costs that are incurred.”

VCA San Francisco Veterinary Specialists has yet to see a fee increase, noted Bradley. “VCA has annual increases they apply to various services, such as consult fees,” she said, “but there have been no increases to services in relation to the union.”

Practice owners also express concern that a union will adversely affect office dynamics and patient care, especially if some employees do not support the effort. “How will [a union] affect the mood and morale within what is typically a small business environment?” asked Mark Cushing, JD, CEO and founder of the Arizona-based Animal Policy Group.

NVPU has turned to social media to inform veterinary support staff about the growing union initiative, and how to proceed if they are interested in trying to unionize their hospital. “The NVPU has a very active Facebook group, which is open to all non-management veterinary staff,” Zehna said. “We also have a website—natvpu.org—and contacts receive a prompt response to questions or concerns. We receive inquiries on an almost daily basis from veterinary support staff around the country wondering how to become involved.”

Stay informed about all the news of interest to veterinary nurses at Today’s Veterinary Nurse.