Canine digits are amputated for reasons ranging from osteomyelitis to melanoma. This case was the author's first experience with a diagnosis of digit osteosarcoma.

Stephani obtained her license in 2013 after earning a bachelor’s of science degree in veterinary technology from Michigan State University. She got her start in general practice, but has spent the past 3 years dedicated to the busy surgery department of BluePearl Veterinary Partners in Southfield, Michigan, where she is currently the primary nurse for her surgeon. When not in the operating room, she can be found planning for a future VTS in anesthesia and analgesia.

Several disease processes can affect an animal’s digits. Those that require surgical intervention include severe fractures, infection (e.g., osteomyelitis), benign masses, and malignant processes of the bone and/or surrounding soft tissue. Over the past year, the surgery department of BluePearl Veterinary Partners in Southfield, Michigan, has seen cases involving each of these ailments. One case proved to be particularly interesting, as it involved an uncommon malignant process of the affected digit: osteosarcoma (OSA).

On presentation, Bella was found to be bright, alert, and responsive. The base of the affected toenail was actively bleeding. On physical examination, the only significant findings were a firm, 2.5 × 2 cm tumor associated with the second digit on the right forelimb (FIGURES 1 AND 2) and a grade III/VI heart murmur. A cardiology consultation was recommended to better assess the heart murmur before any future anesthetic events. Thoracic radiographs were recommended to assess for metastatic disease as well as to evaluate the cardiac silhouette and major vessels in light of the heart murmur. The owners agreed to the radiographs, which were obtained at the initial appointment. Official review of the radiographs revealed age-related pulmonary changes, with no obvious signs of metastatic disease. The cardiology consultation was planned for a future date. 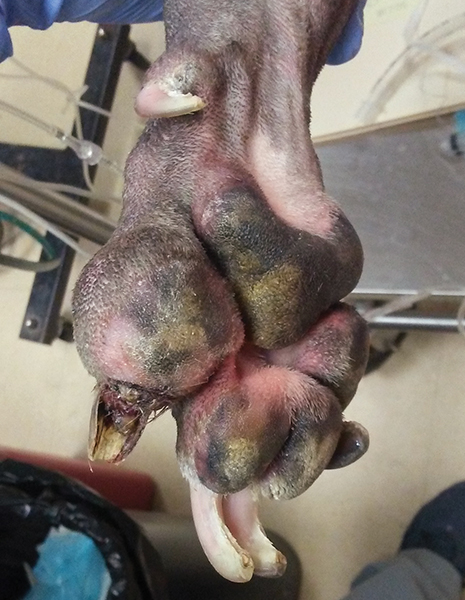 Figure 1. Palmar aspect of affected forepaw. Swelling of digit 2 and abnormalities of the corresponding nail can be seen.

Given the length of time that Bella had been experiencing issues with her digit, along with financial concerns on the part of the owners, digit amputation was recommended with no further diagnostic tests (i.e., fine-needle aspiration and digit radiography). Several possible tumor types were discussed with the owners before surgery, including squamous cell carcinoma (SCC) and melanoma. These two types account for most malignant processes affecting the digits, with SCC diagnosed in 50% of cases and melanoma in 16%.1 Digit OSA is much less common and was not discussed in depth with the owners. It was listed along with mast cell tumor as a diagnostic differential for the mass, pending histopathology results. 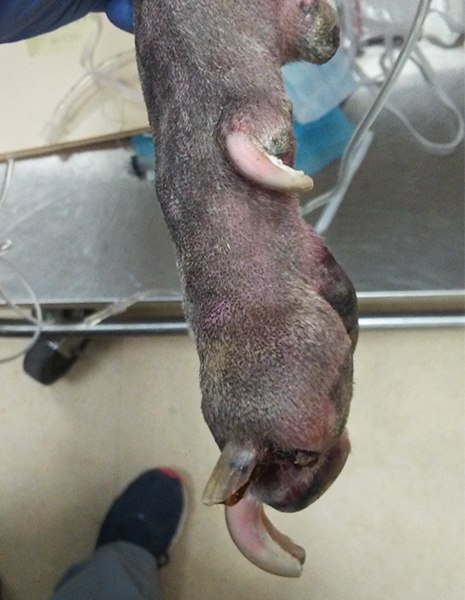 Seven weeks after the initial presentation, the owners chose to return with Bella for a cardiology evaluation to address her heart murmur. At physical examination, the only significant findings were, again, a grade III/VI heart murmur and swelling associated with the second digit of her right front foot. The size and appearance of the swelling appeared to be consistent with her initial presentation.

A full cardiology examination was completed, including an echocardiogram, to assess the structure and function of Bella’s heart. Chronic degenerative valve disease with mild to moderate mitral regurgitation was diagnosed. No cardiac remodeling was present. One singular ventricular premature contraction was noted during the echocardiogram but was not repeatable. Regular recheck examinations were recommended every 6 to 8 months to assess potential progression of the cardiac disease, but no medications were deemed necessary at that time. Bella was cleared for a normal anesthetic protocol by the cardiology department, with the only recommendation being a reduced intraoperative fluid rate.

A surgical consultation was performed on the same day to discuss options for the digit mass. In agreement with the oncology department, surgical amputation of the affected digit was recommended, with potential follow-up with oncology department based on histopathology results. The owners agreed to surgery and scheduled Bella’s procedure for the following week.

Based on the medial location of the second digit, Bella was placed in right lateral recumbency for surgery to provide the surgeons with better access to the area. Sterile vet wrap was used as a tourniquet to decrease intraoperative hemorrhage. The digit was disarticulated at the metacarpal-phalangeal junction, and additional metacarpal bone was removed with rongeurs before closure. This bone removal not only achieved better cosmetic results but also decreased the risk of pressure sores developing during Bella’s recovery, as a bandage was planned as part of her aftercare. Nocita® (nocita.aratana.com) (bupivacaine liposome injection) was administered intraoperatively around the incision in multiple layers for immediate postoperative pain management that would last for 72 hours after administration. The amputated digit was preserved in 10% neutral, buffered formalin and submitted for histopathology through Colorado State University.

A soft, padded bandage and splint were placed on the right forelimb for compression and protection of the surgery site, and Bella was recovered quietly without incident. She was hospitalized overnight with intermittent injections of hydromorphone for analgesia. At discharge the following morning, instructions were given to the owners for 2 weeks of activity restriction and bandage care. Bella was discharged with oral cefpodoxime and carprofen.

A final histopathology report, received 13 days after surgery, revealed OSA of the digit that appeared to be contained solely in the third phalanx and was completely removed.

Bella presented to the surgery department 1 week after surgery for a bandage change. The owner reported that she was doing well and had no concerns. As the second digit is a non-weight-bearing toe, Bella easily overcame its loss. The following week, her primary veterinarian performed final bandage removal and suture removal. The owners were contacted by the oncologist and encouraged to follow up with the oncology department to begin chemotherapy treatment. The recommended agent of choice for treatment of OSA is carboplatin given by injection every 3 weeks for 6 treatments total.2 As of this report, no further follow-ups have been scheduled at BluePearl past the 1-week recheck with the surgery department.

In the traditional presentation, OSA accounts for about 85% of primary bone tumors in dogs and is typically highly malignant.3 If possible, surgery is recommended to remove the primary tumor. As most tumors are found in appendicular locations—most commonly the proximal humerus and distal radius4—this is typically achieved by amputation. Follow-up chemotherapy is then recommended to prevent or delay the onset of malignant spread of disease, which commonly occurs to the lungs and lymph nodes. Median survival after diagnosis for appendicular OSA is about 4 to 5 months after amputation of the limb alone. Survival time is prolonged to about 1 year with the addition of chemotherapy following surgery.5

Bella presented a unique case, as her development of OSA did not fit the traditional presentation. Although the digit is an uncommon location for OSA, it is generally thought to be more favorable in terms of prognosis. One study that looked at a small population of dogs with digit OSA (n = 9) concluded that OSA accounts for approximately 6% of digit tumor cases, with a median survival time of 466 days (1.5 years).6 Chemotherapy after surgery did not seem to have an effect on survival time compared with surgery alone. Additional studies focusing specifically on digit OSA presentation and the long-term implications of treatment and prognosis are not readily available.

At initial presentation, Bella showed no signs of metastatic disease. When dealing with any mass that has the potential to be neoplastic, it is important to assess the patient’s current status for possible metastatic spread. This includes obtaining 3-view thoracic radiographs and abdominal ultrasound images. At the time of diagnosis with traditional OSA, about 90% of cases have micrometastatic disease; only 15% have gross metastatic disease.5 It is unclear whether these statistics hold true for uncommon OSA presentations such as Bella’s digit.

Given that clean margins of 1 to 1.5 cm were achieved, and that the tumor was contained solely in the third phalanx of the affected toe, Bella may have a favorable long-term outcome. However, clinical signs were present for 1 year before the initial oncology consultation, and chemotherapy has not been scheduled, so it is unclear what the future holds. According to her primary veterinarian, Bella has been doing very well since surgery with no signs of lameness in the operated leg.

During my time in the surgery department, we have amputated digits for reasons ranging from osteomyelitis to benign masses to SCC and melanoma. Bella’s case was my first experience with a diagnosis of digit OSA. Follow-up involving regular, thorough physical examination, thoracic radiography, and abdominal ultrasonography is needed to assess her progress and potential for disease spread.