Kelly’s veterinary career spans 18 years, covering corporate practice, disaster response, community  veterinary care, and private practice. She became a CVT in 2008. She has worked with the ASPCA and FBI to oppose blood sports, puppy mills, and hoarding, as well as with the USDA, where she was recognized for her role in stopping the outbreak of the highly pathogenic avian influenza in 2015. She has also volunteered across the world with Animal Balance, helping with their spay/neuter program for indigent communities. She is currently pursuing VTS certification in internal medicine, is a RECOVER-certified rescuer, and actively teaches the RECOVER guidelines. She has a Himalayan cat named Blue. He had small cell lymphoma, which helped drive Kelly’s interest in IBD.

Many conditions treated in veterinary hospitals are associated with good prognoses. However, sometimes one condition and/or its treatment leads to another, thereby decreasing the chances of a positive outcome. This article reports the case of a dog whose initial condition and its treatment led to sequelae that affected his overall prognosis.

“Danger,” a 9-year-old castrated male Shih Tzu, was presented to our hospital with a history of weight loss and decreased appetite for 3 weeks. His referring veterinarian had administered maropitant (1 mg/kg SQ; initial prescription had been 2 mg/kg PO, but the clients were not able to administer oral medications), cefovecin (48 mg SQ), and capromorelin (dosage unknown) to stimulate his appetite. Results of thoracic radiography, abdominal ultrasonography, fecal flotation, serum biochemistry, and T4 testing performed in the past month were within normal limits. Complete blood count revealed neutrophilic leukocytosis (white blood cells 17.8 K/µL [reference range 4 to 15.5 K/µL]), neutrophilia (14 418/µL [reference range 2020 to 10 600/µL]), and thrombocytosis (549 K/µL [reference range 170 to 400 K/µL]). Danger had no other pertinent history.

Danger was bright, alert, and responsive. He weighed 5.72 kg and had a body condition score of 3/9, temperature of 101.7°F, respiratory rate of 24 breaths/min, and a heart rate of 120 beats/min. His mucous membranes were pink and moist, capillary refill time was >2 seconds, and cardiothoracic auscultation was unremarkable. Danger’s skin, hair coat, eyes, nose, ears, and throat seemed normal for his breed.

Abdominal palpation indicated that his abdomen was slightly tense, but no obvious masses were noted. Danger’s history and previous laboratory findings led to the following lists and subsequent workup.

To explore a definitive diagnosis, the veterinarians performed endoscopy of Danger’s upper gastrointestinal (GI) tract, including his esophagus, stomach, and proximal duodenum. No abnormalities were noted during the preanesthetic examination. I then placed an IV catheter and ran a biochemistry panel, results of which were within normal limits. The anesthetic plan included premedication with maropitant (1 mg/kg IV).

Because opioids can make pyloric intubation difficult, it is sometimes advisable to wait until pyloric intubation has been achieved before administering opioids to small animal patients. Thus, after the endoscope was passed into Danger’s duodenum, he was given 0.02 mg/kg buprenorphine IV for pain control. Examination revealed severely thickened and irregular gastric and duodenal mucosa and 2 small polypoid growths in the pylorus. Biopsy samples were collected, which I prepared for laboratory examination. I also collected appropriate samples for cobalamin (B12) and resting cortisol testing, results of which came back within normal limits.

A few minutes after buprenorphine administration, Danger’s heart rate dropped from 130 beats/min to 86 beats/min and his systolic blood pressure dropped to 80 mm Hg. Due to the sudden drop, he was administered a crystalloid fluid bolus (10 mL/kg IV), and because his plane of anesthesia (stage III, plane 3) was deeper than necessary, the isoflurane was discontinued.

Shortly thereafter, the procedure was completed. However, during recovery, Danger became bradycardic (56 beats/min), and ECG indicated second-degree atrioventricular block, Mobitz type II. He was also hypotensive (systolic pressure 58 mm Hg). To improve his heart rate, a single dose of atropine (0.02 mg/kg IV) was administered. After a few minutes of no improvement, the dose was repeated and he was given naloxone (0.04 mg/kg IV) to reverse the cardiovascular effects of the buprenorphine. A few minutes after he received the second round of IV medications, his heart rate and rhythm and blood pressure returned within normal limits.

The rest of Danger’s recovery was smooth and uneventful. During his recovery, to start treating presumptive IBD, we administered dexamethasone-SP (0.2 mg/kg IV). We also administered cobalamin (87 mg/kg SQ) to help with protein absorption while we waited for the results of cobalamin level testing.

Danger was sent home with prednisolone, to be given at 1.3 mg/kg PO q12h for 1 week, and then q24h. This decision was made to control GI inflammation enough to increase his appetite and later institute dietary changes to assist in treatment.

Two weeks after endoscopy, Danger’s appetite returned and his vomiting decreased. Ultrasonography indicated that his GI tract was much less thickened. A complete blood count and blood chemistry indicated leukocytosis, thrombocytosis, neutrophilia, monocytosis, increased reticulocytes (TABLE 1), and hypoalbuminemia and hypoproteinemia (TABLE 2). His total protein level had decreased substantially (to 5.3 g/dL) since his referring veterinarian’s finding of 6.4 g/dL before the endoscopy procedure, which the internist who performed his endoscopy believed represented a need for increased therapy. Prednisolone was thus increased back to his original dosage of 1.3 mg/kg PO q12h. Famotidine (1 mg/kg PO q24h) was recommended to decrease the likelihood of gastric ulcer formation. 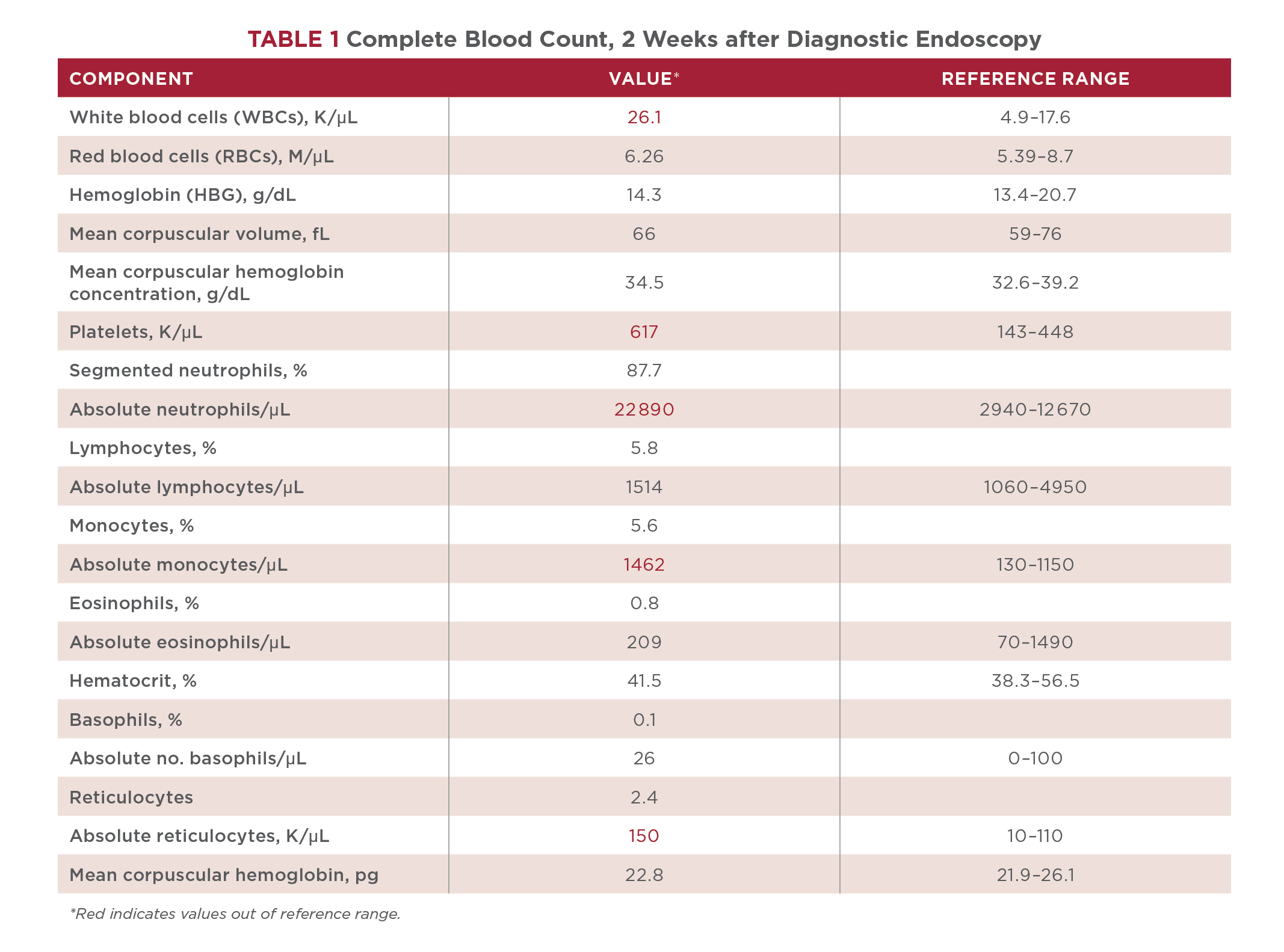 Four days later, Danger’s appetite again declined, and the clients began having trouble administering his medications. Danger began regurgitating white foam and passing dark stool. When returned to the hospital, he seemed dull and lethargic. Physical examination determined that he was 7% dehydrated. Subsequent abdominal ultrasonography revealed a hypoechoic pancreas surrounded by hyperechoic fat. This finding, along with examination findings, led to a diagnosis of mild GI ulceration and pancreatitis secondary to the corticosteroid therapy for IBD. 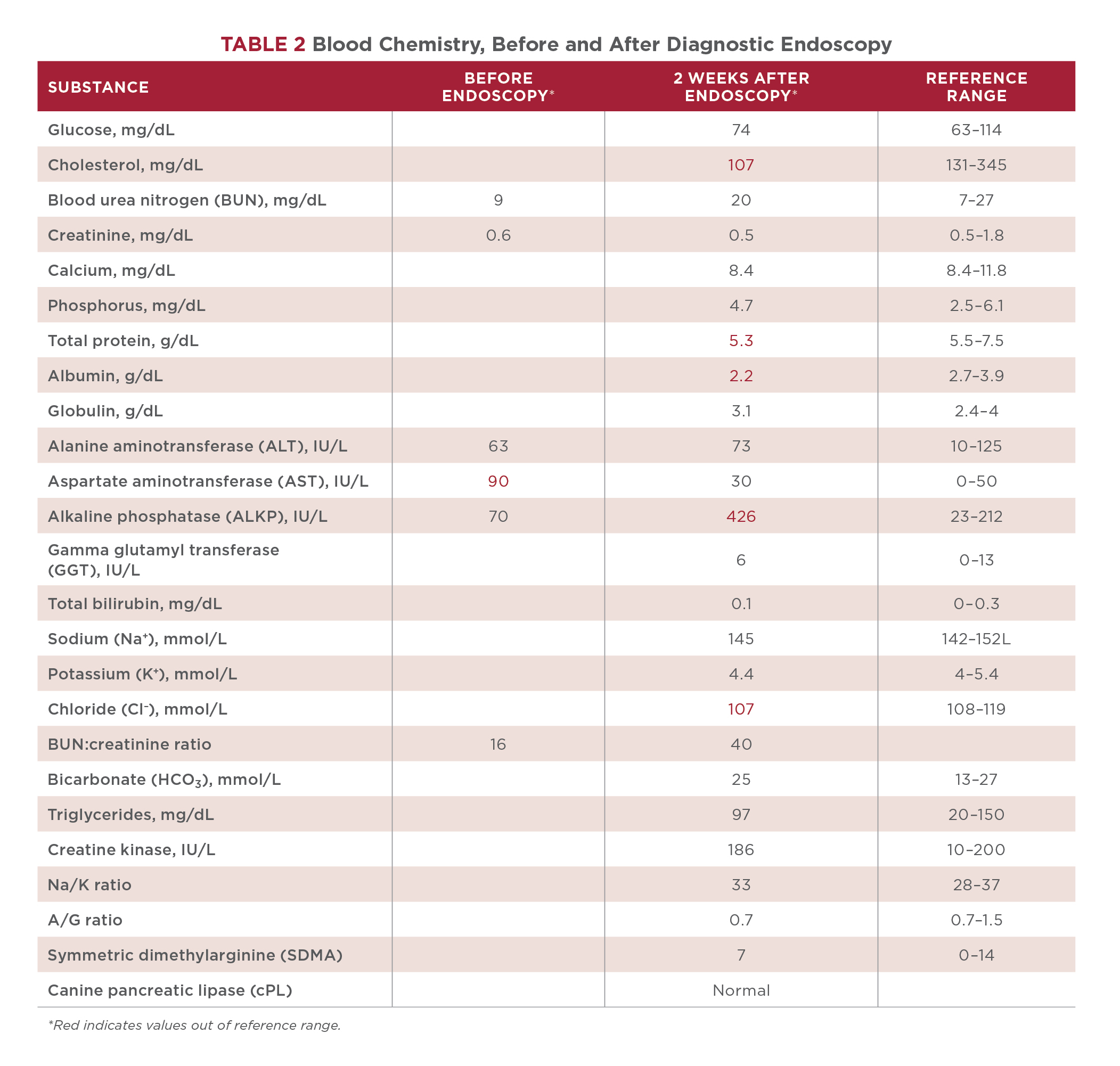 Danger was hospitalized for 2 days. On the first day, he received Normosol-R (3 mL/kg/h IV) with potassium chloride (0.6 mEq/kg/h) to correct his dehydration and electrolyte imbalances, pantoprazole (1 mg/kg q12h) to protect his GI tract, and sucralfate (100 mg/kg PO q8h) to protect the lining of his GI tract and promote repair of the presumed ulceration. On the second day, buprenorphine (0.02 mg/kg IV q8h) was added to reduce the pain of pancreatitis, ondansetron (0.5 mg/kg IV q24h) to decrease stomach acid production, and mirtazapine (7.5 mg PO q24h) to stimulate appetite.

During his 2-day hospital stay, Danger clinically improved and his dehydration resolved. We recommended a feeding tube to facilitate adequate nutrition and consistent medication administration; however, the clients declined and took him home. Unfortunately, Danger did not regain his appetite. Because financial constraints limited the clients’ ability to commit to extensive treatment for Danger, they elected euthanasia.

IBD consists of a group of immune-mediated conditions of the intestines. It is a diagnosis of exclusion and can overlap many other conditions. IBD causes chronic and recurrent GI signs such as vomiting, diarrhea, weight loss, delayed gastric emptying, and poor appetite. The cause of IBD is not well understood, so it is often labeled idiopathic. Many factors are involved in IBD, including diet, genetics, immune function, and microbiota.1 Danger’s IBD was diagnosed as the most common form: lymphocytic plasmacytic enteritis. IBD is treated with anti-inflammatory medications and dietary changes (e.g., switching to novel protein or hydrolyzed protein diets). The drugs most often used to treat this group of disorders are corticosteroids, tylosin, and metronidazole.

Pancreatitis is an inflammatory condition in which the pancreas secretes fewer digestive enzymes, which enables the digestive enzymes to activate prematurely (before they have reached the intestinal lumen), which in turn increases inflammation, causing clinical signs such as edema, fat necrosis, bleeding, and sometimes death.2 The clinical signs of pancreatitis vary and include anorexia, vomiting, weight loss, dehydration, lethargy, and abdominal pain. Although most cases of pancreatitis are idiopathic, IBD can predispose patients to pancreatitis, and corticosteroid therapy may increase its severity.

GI ulceration may be common in patients with IBD because the inflammation increases the permeability of GI mucosa and the delayed gastric emptying increases the amount of time that gastric acid remains in contact with the mucosa. Signs of ulceration can include vomiting, diarrhea, anorexia, lethargy, melena, abdominal pain, hematemesis, hematochezia, shock, anemia, and even death. Ulcers can develop secondary to a disease process or drug therapy. Diseases that predispose small animals to ulcers include IBD, neoplasia, and liver disease. Drugs that have been implicated in GI ulceration include nonsteroidal anti-inflammatory drugs and corticosteroids. GI ulceration is typically treated with histamine H2–receptor blockers (e.g., famotidine), proton pump inhibitors (e.g., omeprazole), and cell-protective agents (e.g., carafate).3

For many patients with IBD, the prognosis is good; however, Danger’s lack of response to treatment and his pancreatitis made his prognosis much worse. Treatments needed to control his IBD would have continued to worsen his pancreatitis and GI ulceration. Because his appetite, from presentation through euthanasia, was never good, diet change was never an option for assisting his recovery.

Cases like Danger’s are challenging. Although the prognosis for each individual comorbidity can be positive, the concurrence of IBD, pancreatitis, and GI ulceration decreased his chances of a successful outcome.