Dolly’s immune system was destroying its own red blood cells due to a rare autoimmune disease called Evans syndrome.

Jennifer is a licensed veterinary technician with a master’s degree in animal biology. She attended the University of California, Davis, and later moved to Utah, where she found her passion for emergency and critical care medicine. Jennifer has worked for BluePearl for the past 5 years and is the emergency and critical care supervisor for the BluePearl Pet Hospital in Midvale, Utah. Her interests include post-cardiopulmonary arrest care, transfusion medicine, and bone marrow disease. She is the proud mother of 4 cats. In her down time, she enjoys spending quality time with her spouse snowboarding, mountain biking, dirt biking, and fishing.

Who Will Win the Grand Prize? For the 2021 Case Report Challenge, a panel of judges selected by the NAVC, Today’s Veterinary Nurse editors, and Assisi Animal Health will choose 4 finalists whose case reports will be published in Today’s Veterinary Nurse in 2021. TVN’s Facebook followers will then select the Grand Prize winner from among the 4 finalists; the winner gets free registration for VMX 2022.

When the suspected cause of anemia is lack of RBC production, bone marrow aspiration/core biopsy sampling is recommended. This case report documents the use of bone marrow cytology to diagnose and successfully treat nonregenerative anemia in a dog with concurrent precursor-targeted immune-mediated anemia and immune-mediated platelet destruction.

Dolly was a 10-year-old spayed female miniature poodle, weighing 5.2 kg, who was referred to our emergency department in the late evening because of anemia. At the time of presentation, she had a 1-week history of lethargy, inappetence, and development of a right-sided aural hematoma. Her primary veterinarian noted pale gums and performed in-house blood work, which revealed a packed cell volume (PCV) of 10% (reference range 37.3% to 61.7%), platelet count of 30,000/µL (reference range 148,000 to 484,000/µL), and mildly increased white blood cells. Dolly was given a dose of maropitant and referred to us for further diagnostic workup and a blood transfusion.

Physical examination revealed that Dolly was afebrile, quiet, alert, and responsive. Her hair coat and body condition were good, and her eyes and nose were free of discharge. She was eupneic, her heart rate and rhythm were within normal limits, and her bronchovesicular sounds were clear. Pulses were strong and synchronous. Her abdomen was soft and nonpainful. She showed no neurologic deficits. Dolly’s vital signs were all within normal limits except for her mucous membranes, which were pale to white, and capillary refill time, which was prolonged at 3 seconds. Her PCV was 16% and total protein level was 6.4 g/dL (reference range 5.2 to 8.2 g/dL).

The next morning, Dolly was transferred to my care. Her PCV had dropped to 19% overnight, but she was bright and her vital signs were within normal limits. The veterinarian ordered a complete blood count (CBC); blood smear examination; saline agglutination test; and a 4DX SNAP test (IDEXX, idexx.com) for heartworm infection, Lyme disease, ehrlichiosis, and anaplasmosis. The CBC revealed a PCV of 16.6%, 38 000 platelets/µL, and 0.1% reticulocytes (absolute count 3400 reticulocytes/µL [reference range 10 000 to 110 000/µL]), indicating a nonregenerative anemia. The blood smear revealed normocytic, normochromic RBCs with no significant polychromasia and no evidence of spherocytosis. Manual platelet count was 30 000/µL. No blood parasites or atypical cells were noted. Saline agglutination was macroscopically and microscopically negative. All SNAP test results were negative. Additional diagnostics, including abdominal ultrasonography, thoracic radiography, urinalysis, and bone marrow aspiration plus core biopsy, were recommended to the client. After much discussion, the client approved bone marrow aspiration, to be performed the following day. That night, her PCV dropped to 12% and total protein level to 6.0 mg/dL.

The next day, Dolly’s right humerus was surgically prepared for bone marrow aspiration. A local block was administered by advancing the syringe perpendicular to the cortical surface of the humerus and while withdrawing it administering 0.5 mL of 2% lidocaine into the periosteum, subcutaneous tissue, and dermis. Next, a 13-gauge Jamshidi bone marrow biopsy needle (BD, bd.com) was used to collect a marrow aspirate according to standard technique. After the sample had been collected, it was placed on several glass slides and prepared by using standard technique for squash cytology. The presence of spicules (which look like grains of sand) on the slides indicated that the marrow sample was probably adequate (FIGURE 1). The sample was submitted for pathologist review. A core biopsy sample was also collected and saved in 10% formalin. 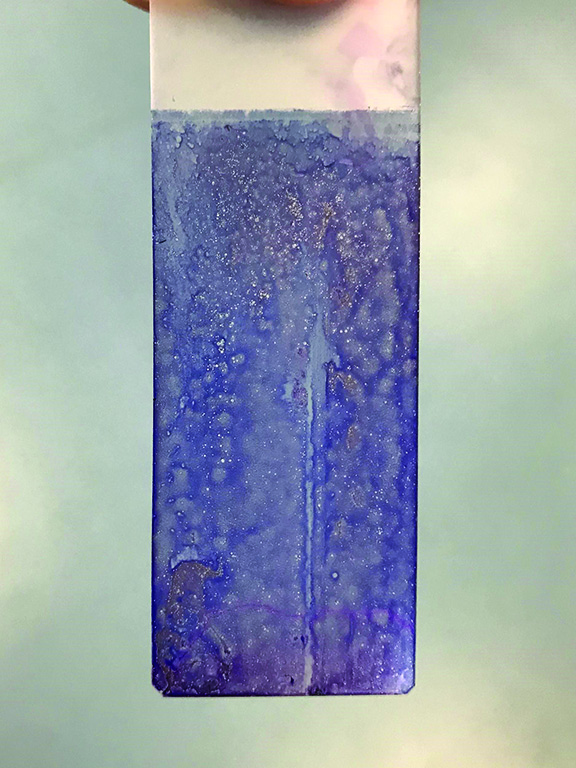 After the bone marrow aspiration, Dolly received a second blood transfusion because of her anemia. She was administered 1 unit of DEA 1.1–negative packed RBCs over 3 hours. During the course of the transfusion, her temperature rose to 103.5˚F, she vomited once, and diarrhea developed, indicating a possible transfusion reaction. She was given 0.28 mg/kg dexamethasone sodium phosphate IV, 2 mg/kg diphenhydramine IM, and 1 mg/kg maropitant IV. Her temperature decreased to within normal range. After the transfusion, her PCV was 24% and total protein was 6.2 mg/dL.

That night, after her blood transfusion had been completed, Dolly was discharged home with oral formulations for all medications administered in the hospital. Her bone marrow cytology results, reported the following day, led to a diagnosis of precursor-targeted immune-mediated anemia and concurrent immune-mediated thrombocytopenia (FIGURE 2). Cyclosporine was prescribed at 10 mg/kg PO q24h. After 1 week, her CBC still did not show evidence of RBC regeneration and her PCV had dropped to 16%. Azathioprine was started at 2.5 mg/kg PO q24h. A recheck CBC 4 days later indicated RBC regeneration (reticulocytes increased to 11.5%), her PCV had increased to 24%, and her platelet count was within normal limits (223 000/µL). 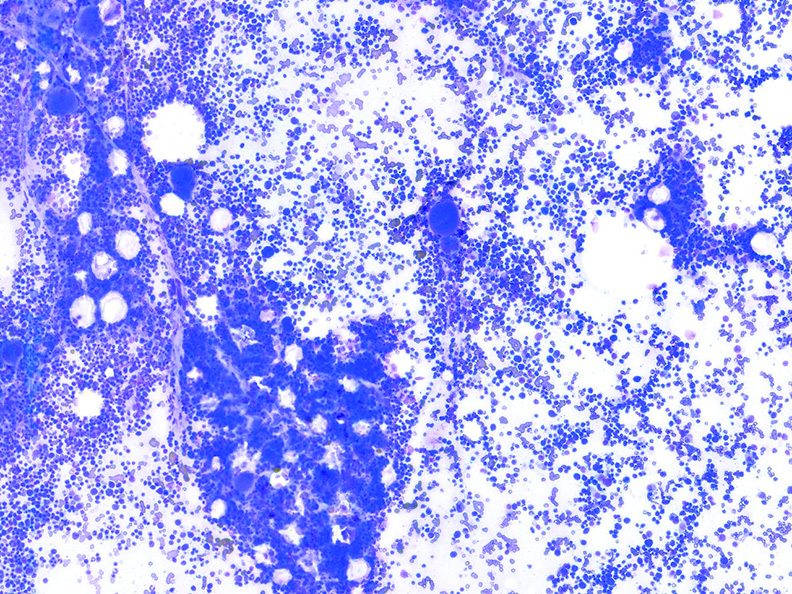 A blood transfusion may be indicated for patients with clinical manifestations of anemia. However, patients with chronic anemia may tolerate lower PCVs than patients with acute anemia; thus, a blood transfusion is highly recommended for any patients with a PCV of 10% or less.1 Choice of blood product for transfusion may be based on the patient’s clinical presentation, which may include pale mucous membranes, tachycardia, lethargy, and tachypnea. Platelets are not commonly transfused, and their life span after transfusion is not well documented. Blood typing (to determine antigens on RBC surfaces) of all patients is recommended before transfusing fresh whole blood or packed RBCs.1 To avoid transfusion reaction, cross-matching (to determine antibodies in plasma) should be performed for patients who have received a blood transfusion more than 3 days prior. Common clinical signs of a transfusion reaction in dogs include elevated body temperature, vomiting, and diarrhea. We did not perform blood typing for Dolly because only DEA 1.1–negative blood was available.

Bone marrow aspirates can be used to diagnose the cause of nonregenerative anemia.2 We collected Dolly’s bone marrow aspirate from the proximal right humerus because of the ease of the sampling technique. Other potential sampling sites are the iliac crest of the pelvis or the trochanteric fossa of the proximal femur. For sedation, we chose propofol due to its titratability and short duration of action. During titration, we closely monitored Dolly’s respiratory rate because propofol can cause transient respiratory depression and apnea. Had propofol sedation not been enough, we could have added isoflurane anesthesia. For analgesia during the procedure, we chose methadone over hydromorphone or butorphanol because of the effectiveness and minimal side effects of methadone. We used a local block to further help reduce discomfort.

Dolly’s bone marrow aspirate revealed marked erythroid hyperplasia with left shifting, megakaryocytic hyperplasia with left shifting, and rubriphagocytic macrophages. Hyperplasia indicates an elevated number of cells and is considered a normal response of erythroid cells to peripheral anemia and megakaryocytic cells to thrombocytopenia.3 Left-shifting indicates a large number of early progenitor cells. The presence of rubriphagocytic macrophages indicates macrophage phagocytosis of erythroid precursors and is a classic finding in bone marrow aspirates of dogs with precursor-targeted immune-mediated anemia (FIGURE 3).4 A left shift of megakaryocytes paired with a peripheral decrease of circulating platelets is consistent with immune-mediated thrombocytopenia. 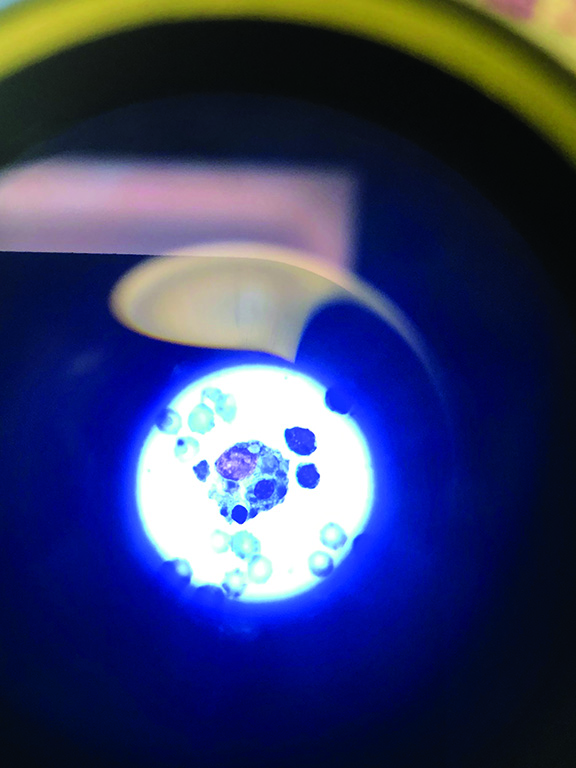 The combination of the 2 rare immune disorders experienced by Dolly—precursor-targeted immune-mediated anemia and immune-mediated thrombocytopenia—is called Evans syndrome. Dolly’s diagnosis was based on 2 factors: interpretation of bone marrow cytology and her response to appropriate treatment. Our aggressive treatment of her anemia with multiple blood transfusions provided support during her diagnostic workup. Quick evaluation of her bone marrow and administration of immunosuppressive drugs allowed her the time needed to respond to appropriate therapy. Dolly’s condition is currently in remission, and she is living a normal life with her family.