UTI IN A CAT WITH CKD Nurses need to know how comorbidities interact and how treatment for one disease can affect another.

Katmandu was a 9-year-old spayed female Bengal cat with a history of chronic kidney disease (CKD) and restrictive cardiomyopathy. She was brought to the clinic for re-examination of a recurrent urinary tract infection (UTI), for which her treatment had been various regimens of antibiotics. Her only medications at this time were benazepril 2.5 mg PO q24h (0.8 mg/kg) and pimobendan 1.25 mg PO q24h (0.5 mg/kg).

Because Katmandu was feisty, her physical examination was limited; only a respiratory rate was obtained, which was 40 breaths/minute. This rate was slightly increased from the reference range (10 to 32 breaths/minute) and suspected to be the result of stress.

The primary problem, and reason for examination, was to check for possible recurrence of the UTI. Secondary problems included the pre-existing CKD and restrictive cardiomyopathy, neither of which seemed to be causing any problems at the time of this visit. When Katmandu was admitted to the hospital, we had to restrain her using a towel and cat muzzle for sample collection. Blood samples were obtained and submitted for blood urea nitrogen (BUN), serum creatinine, and electrolyte testing, and a urine sample was collected via sterile cystocentesis and submitted for urinalysis and culture. Cystocentesis is the standard method for obtaining a sterile urine sample to ensure it is not contaminated with bacteria from the lower urinary tract.

Laboratory results revealed azotemia and mild electrolyte derangements (TABLE 1). Urinalysis documented a urine specific gravity of 1.011, proteinuria of 1+, and presence of bacilli. Urine culture grew Escherichia coli, a bacterium commonly isolated from the urine of cats with a UTI. Antibiotic sensitivity testing was performed to determine the most appropriate antibiotic.

The Kirby-Bauer disc-diffusion method (FIGURE 1) was used and revealed that the bacteria in the urine sample were resistant to multiple antibiotics, had intermediate sensitivity to amikacin, and were sensitive to gentamicin only (TABLE 2). Katmandu was determined to have a multidrug-resistant UTI. Pre-existing CKD has been identified as a risk factor for development of a UTI, thought to result from the presence of dilute urine in the urinary tract. 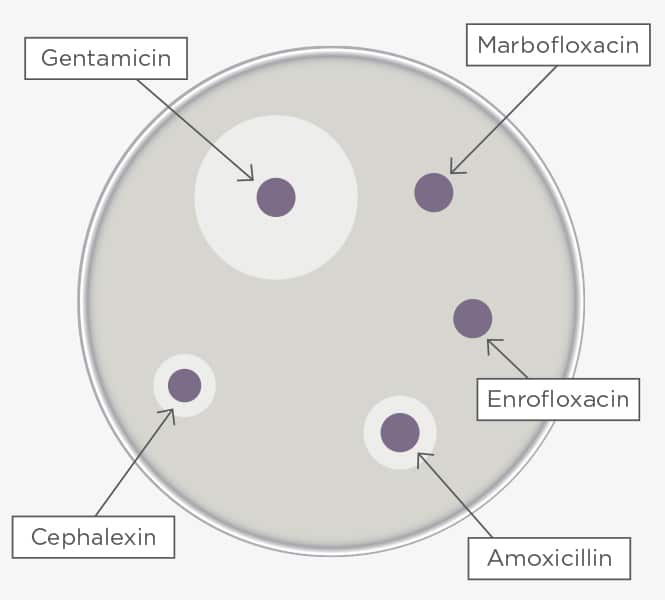 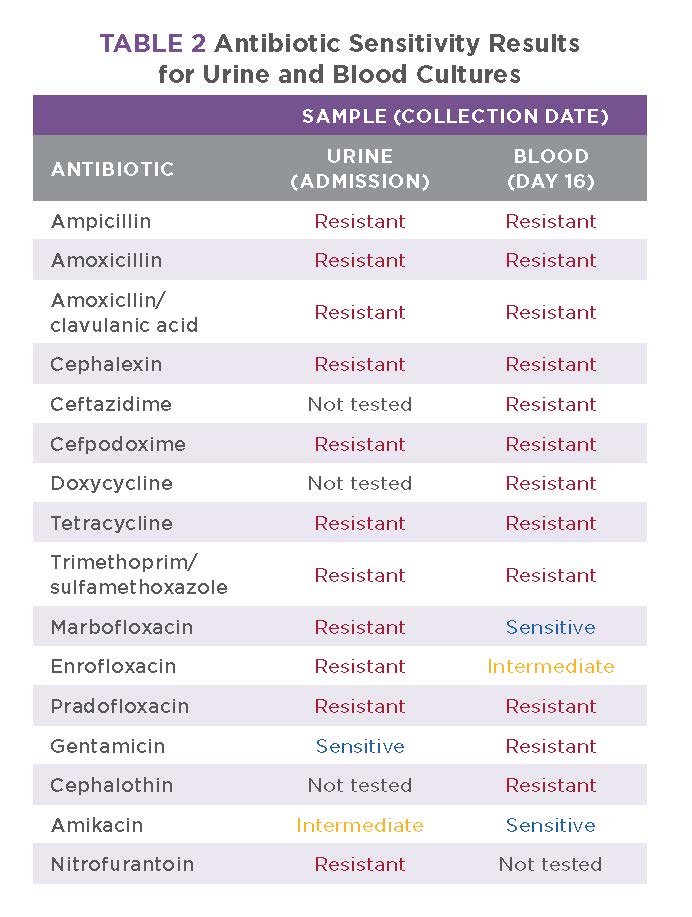 Treatment protocols for complicated (i.e., multidrug-resistant) infections can range from 30 to 60 days. Therefore, hospitalization for a minimum of 30 days was expected for Katmandu. To address the azotemia, the veterinarian prescribed intravenous fluid therapy (IVFT) of lactated Ringer’s solution at 4 mL/kg/hour. However, because IVFT is contraindicated for patients with congestive heart failure (risk for fluid overload resulting from reduced cardiac output), any patient with cardiac disease that receives IVFT must be carefully monitored during infusion. Early symptoms of fluid overload include unexpected increases in respiratory rate and effort, which may progress to dyspnea, generalized edema, and nasal discharge. While Katmandu was receiving IVFT, we monitored her respiratory rate and effort every 2 hours; we set the limit at which we would notify a veterinarian at 40 breaths/minute or any signs of increased respiratory effort.

Sensitivity testing indicated that gentamicin was the most appropriate antibiotic for Katmandu’s UTI, and the veterinarian prescribed 5 mg gentamicin SC q24h. Gentamicin is an aminoglycoside (a nephrotoxin), so its use is generally contraindicated in patients with renal disease; however, for Katmandu, it was the only practical choice. Amikacin was not chosen because sensitivity was only intermediate, it is also an aminoglycoside, and it was unavailable at that time. As part of Katmandu’s management, we collected voided urine samples daily for cytologic examination and to monitor for tubular casts, which can be early indicators of renal tubular damage. To monitor for any evidence of progressing renal damage, we also regularly measured BUN and creatinine levels. Katmandu was already being fed a commercial prescription food suitable for a patient with CKD and her appetite was good.

Because the bacteria causing Katmandu’s infection were resistant to multiple antibiotics (a multidrug-resistant infection), we chose to implement barrier nursing to prevent contamination of other patients. Also because of the multidrug-resistant nature of the UTI, it was discussed whether to isolate Katmandu in a separate ward; however, there was concern that during her long hospitalization, she would become depressed from lack of interaction. The main concern was environmental contamination with urine, which could be easily managed within a main ward by housing Katmandu in a low cage, away from other patients, and using bedding and equipment that was designated for her sole use and washed separately at high temperatures. Staff wore disposable gloves and gowns. If the bacteria had been transmissible via other means (e.g., airborne), Katmandu would have been completely isolated.

Katmandu remained well and feisty. Repeat testing of renal parameters revealed reduced azotemia: BUN decreased to 27.7 mmol/L and creatinine to 540 µmol/L (TABLE 1). Daily urine cytologic analyses were unremarkable, and there was no cause for concern with regard to respiratory rate or effort. Because of the need for ongoing IVFT, the peripheral IV catheter had been replaced multiple times, and it was becoming increasingly difficult to find a suitable vein. By day 11, it became impossible to gain peripheral IV access. After discussion, it was decided to place a central venous catheter (CVC). For some patients, this procedure can be performed under light sedation; unfortunately, because of Katmandu’s temperament, a general anesthetic was required. General anesthesia is generally contraindicated in a patient with CKD because of the risk of worsening the renal function (hypotension decreases renal blood flow). A 6-French gauge CVC was aseptically placed in the right jugular vein by using the Seldinger technique. This technique involves placing a guide wire into the jugular vein via a percutaneous entry needle and then threading the catheter over the guide wire into the vein. Maintenance of a CVC is very important, and our standard protocol is to flush it with heparinized saline and re-dress it every 6 hours and to check the insertion site each time for any signs of inflammation or infection (redness, swelling, discharge).

During this period, no change was noted in Katmandu’s condition, no problems occurred with maintenance of the CVC, and no evidence of renal tubular casts in the urine was seen. Her respiratory rate and effort were monitored every 2 hours but no changes and no other signs of fluid overload were noted. On day 16, a temperature of 104.9°F (reference range 100.4°F to 101.3°F) developed unexpectedly, at which time Katmandu became lethargic and inappetent. Because her mentation and temperature had been normal until this point, we did not think that the UTI was the cause for the pyrexia. We checked the CVC insertion site for an obvious source of infection but found no redness, swelling, or discharge. The veterinarian requested collection of blood for culture. We collected 5 mL blood from the CVC and transferred it into a bottle containing culture medium. Maintaining aseptic technique during collection is crucial for preventing inadvertent introduction of external bacteria into the culture medium.

The laboratory results (TABLE 2) demonstrated a growth of Klebsiella pneumoniae, which was sensitive to marbofloxacin and amikacin. Although amikacin would have been ideal (because it could be used to treat the E. coli and the K. pneumoniae), it was not available to us, so the veterinarian prescribed marbofloxacin at 12.5 mg PO q24h along with the gentamicin. By day 19, Katmandu’s temperature had decreased to a range of 100.5°F to 101.6°F. Katmandu again became feisty and her appetite improved.

As part of overall monitoring, we performed routine hematology, which documented a nonregenerative anemia and a hematocrit of 0.13 L/L (reference range 0.29 to 0.46 L/L). Katmandu was not showing any signs of being clinically affected by the anemia; her cardiovascular system seemed stable, with normal heart and respiratory rates and good pulse qualities.

Nonregenerative anemia can develop in patients with CKD because the failing kidneys produce less erythropoietin, which leads to reduced erythrocyte (red blood cell) production and fewer circulating erythrocytes. To address Katmandu’s anemia, the veterinarian administered 1.6 mg darbepoetin SC (0.5 mg/kg), a synthetic form of protein that is similar to erythropoietin but less immunogenic; it helps stimulate bone marrow production of erythrocytes. The main concern about administering this drug was the possibility of an anaphylactic reaction, although rare. After administering darbepoetin, we checked Katmandu’s heart and respiratory rates every hour for the first 12 hours and then every 2 hours for the next 24 hours. She experienced no adverse effects as a result of the drug administration. We considered also giving her a blood transfusion; however, that would not have addressed the underlying cause of anemia and Katmandu would probably have experienced a relapse within a short time. This fact, combined with the limited availability of blood for transfusion of cats, meant that Katmandu was not a good transfusion candidate. Repeated hematology indicated that her hematocrit had increased to 0.18 L/L and her renal parameters had plateaued and remained stable (TABLE 1). IVFT was discontinued and the CVC was removed. To prevent hemorrhage, we placed a light pressure bandage over the CVC site for an hour after removal. By day 41, the veterinarian discharged her from the hospital. She had received a total of 34 doses of gentamicin, and her last 3 urine culture samples, obtained by sterile cystocentesis, had been negative for bacteria. Katmandu continued receiving her previous medications for CKD and restrictive cardiomyopathy but did not receive any more antibiotics.

Unfortunately, this case did not have a favorable outcome. Despite aggressive treatment and very dedicated clients, Katmandu’s multidrug-resistant UTI relapsed and there was the possibility that she had an underlying pyelonephritis. After discharge Katmandu’s treatment continued for several weeks, but the speed of the UTI recurrence and presence of concurrent conditions led the clients to opt for euthanization. For all of our patients, it is important to consider concurrent diseases and disorders and to understand how treatment for one disease can affect another.