MaryEllen earned her bachelor’s degree in science at the University of Illinois in Animal Sciences. She then went back to school at Parkland College and became a certified veterinary technician. She has been an active member of the ASPCA Animal Poison Control Center since May of 2011. Outside of work, MaryEllen enjoys spending time with her off-the-track thoroughbred horse, Parker, and volunteering with her Pet Partners–registered dog, Ruby.

Blister beetles, also known as the Spanish fly or Cantharis vesicatoria, are commonly associated with toxicosis in horses. More than 200 species are found throughout the continental United States. They are generally seen in mid to late summer in the eastern and central states; however, various species can be found from southern Canada to Mexico and from the Atlantic coast to New Mexico. The beetles can appear in great swarms and tend to damage vegetables and some flowering forage crops. Blister beetles contain a toxic oily substance called cantharidin, a noxious defense mechanism that offers protection from predators. Cantharidin can severely injure or kill horses when even a small amount is ingested. 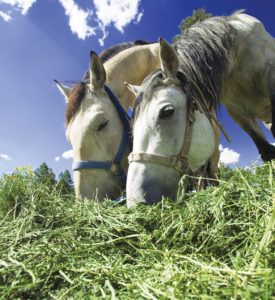 HORSES COME INTO CONTACT WITH CANTHARIDIN by ingesting alfalfa hay that has been infested by blister beetles.

Horses come into contact with cantharidin by ingesting alfalfa hay that has been infested by the beetles. The oily substance can contaminate the hay even if the beetles were crushed into the feedstuff. The amount of toxin each beetle produces varies between species and by sex within each species. The toxin is commonly in the male sex organs but is transferred to females during mating season.

Cantharidin is very stable. Crushing or chemically killing the beetles does not diminish the toxin’s potency. Toxicity can actually be more serious when crushed beetles have been removed from affected hay because the toxin is more bioavailable and the presence of the beetles cannot be detected.

Cantharidin toxicity is dose dependent, with lethal doses as low as 1 mg/kg.1 If beetles contain an average of 1 mg cantharidin per beetle, as little as 4 to 6 g of dried beetles may be fatal to the average-sized horse. Onset and duration of toxicosis can vary from hours to days.

Cantharidin can cause inflammation and ulceration of the urinary and gastrointestinal (GI) tracts. It is excreted through the urine and can cause significant bladder irritation. Calcium and magnesium levels in horses may decrease, and heart muscle tissue can deteriorate. Classic clinical signs are dark, congested mucous membranes and frequently drinking small amounts of water or submerging the whole muzzle in water and “water playing.” Other progressive signs include colic, depression, anorexia, ulceration of oral mucosa, diarrhea and polyuria leading to dysuria, sweating, delayed capillary refill time, tachycardia, tachypnea, muscle rigidity, collapse, dehydration, and synchronous diaphragmatic flutter. Horses that ingest a massive amount of toxin may show signs of severe shock and die within hours. Sudden death with no outward clinical signs has been reported.2

There is no specific antidote for cantharidin. If exposure is caught early, mineral oil can be administered via a nasogastric tube to move the toxin through the GI tract. Activated charcoal is contraindicated because it can slow the healing of GI ulcers; also, it is unknown whether activated charcoal can fully bind cantharidin, making it an ineffective form of decontamination.

Early symptomatic care is necessary for successful recovery and a good prognosis. Care can vary depending on clinical signs. Treatment includes fluids, pain management, nutritional supplementation, GI protectants, and serum electrolyte monitoring. Because cantharidin can lower calcium and magnesium levels, prolonged calcium and magnesium supplementation may be indicated. If the animal develops significant ulcers, antibiotics may also be necessary.

Prognosis depends not only on the amount of cantharidin ingested and progression of clinical signs, but also the types of treatments available and the speed at which therapy is initiated. Prognosis improves daily if complications do not develop. If tachycardia and tachypnea are unresponsive to treatment and creatine kinase activity increases over the first 48 hours, prognosis is poor as patients develop shock.

Testing for cantharidin in the urine and/or GI contents is the main way to diagnose toxicosis. Insect parts can sometimes be identified in the GI contents or feces. In cases of colic from blister beetle toxicosis, hypocalcemia and hypomagnesemia are common. Other abnormal laboratory findings include hypoproteinemia, azotemia, increased creatine kinase activity, hyposthenuria, and hematuria.3

Necropsy results may include mucosal hyperemia, hemorrhage, edema, vesication, and ulceration anywhere within the GI or urinary tract.

Although blister beetle exposures can be serious and sometimes fatal, horse owners can take preventive measures to make sure their animals do not eat contaminated hay. For example, owners can shake each hay flake to look for evidence of beetles before feeding. Contaminated hay should not be fed even after beetle removal because the body fluids remaining on the hay contain cantharidin and can still cause toxicosis. 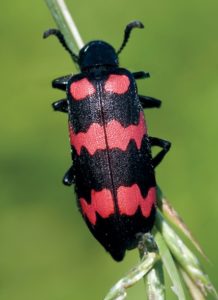 BLISTER BEETLES are generally pollen feeders and can be found on alfalfa blossoms.

Hay farmers can prevent blister beetle poisoning. Blister beetles are generally pollen feeders and can be found on alfalfa blossoms. Cutting the hay before it blossoms is a great way to prevent beetle infestations. Ideally, alfalfa hay should be harvested before it reaches full bloom, when blister beetles are most attracted to it. If the alfalfa has blossomed, the hay can be left in the field to dry after cutting to allow the beetles to either fly away or settle out of the hay during the raking process. The main source of contamination is when farmers simultaneously cut and crimp or bale hay. Although this process saves time, it does not allow the potentially toxic beetles to get out of the hay before it is baled. When hay is crimped right away, the beetles in it are crushed and their body fluids contaminate the hay. Thus even if hay purchasers shake out the beetles after opening a bale, cantharidin is still present in the feedstuff.

Weed prevention can also be helpful because the beetles can be attracted to blooming weeds. Farmers can also walk the fields; if any areas of the field contain swarms, avoiding infested areas for a few days will allow most insects to leave. Furthermore, using equipment without hay conditioners, or leaving the hay conditioner open, may help reduce beetle mortality and allow beetles to disperse before hay is baled.

First cut hay is generally harvested before the beetle mating season, which is when swarming is common. Owners should ask hay providers when hay was baled and if it was left to dry in the field before baling.

If blister beetles are found in hay that has been fed to horses, the hay should be removed from the stall and a veterinarian or the ASPCA Animal Poison Control Center should be contacted for further treatment information.