The Resilience of Animals

Wendy has been a veterinary technician for more than 25 years. She began her career in a private practice setting before moving to the University of Florida College of Veterinary Medicine as an anesthesia technician. She was lucky enough to move around the veterinary college in different capacities, including research, orthopedics, and shelter medicine, and finally found her niche in rehabilitation. She helped develop the rehabilitation department at the university and has seen it grow and expand tremendously. Wendy is a charter member and the current president of the Academy of Physical Rehabilitation Veterinary Technicians.

Animals have always been a huge part of my life. Growing up on a dairy farm in upstate New York, I was the kid who brought stray animals home in the hope I could keep them. As I got older, I knew that a job working with animals was what I wanted. I graduated from college as a zookeeper and initially worked in a small, private zoo until an injury prevented me from continuing such hard physical labor. I then worked at a couple of private veterinary practices for a few years until I got a job at the University of Florida Veterinary School, where I have worked in several different services for the past 16 years. I love what I do! The best part of my job as a rehabilitation technician is the bond I form with my patients and the ability to watch them heal. One special patient was Natalia.

I first met Natalia, a saluki, in September 2014. She had been a street dog from Qatar, in the Middle East, that was lucky enough to get rescued by an amazing group there. Her journey from Qatar to the United States through Alabama Sighthound Adoptions was a long one, but eventually, she arrived at the University of Florida Small Animal Hospital.

When Natalia arrived at the university, she was severely lame in her right forelimb with accompanying muscle atrophy, and the plan was to perform an ovariohysterectomy and imaging studies. Radiography and computed tomography showed that the extent of her injuries was shocking. She had a fractured pelvis and acetabulum, a chronic, healed left ulnar fracture that still contained bullet fragments, a comminuted right olecranon avulsion fracture, and several shrapnel pieces throughout her body.

Despite all that, Natalia remained the sweetest dog imaginable. She walked around and greeted everyone as if they were her best friends. Our goal was to help Natalia be more comfortable and able to use her right forelimb. Because the muscle was severely atrophied and the triceps tendon severely contracted in the right forelimb, we needed to build muscle mass and increase her range of motion. Surgery to repair her avulsion fracture was initially considered, but the extent of the triceps contracture was too great to have a successful outcome, so we had our work cut out for us. 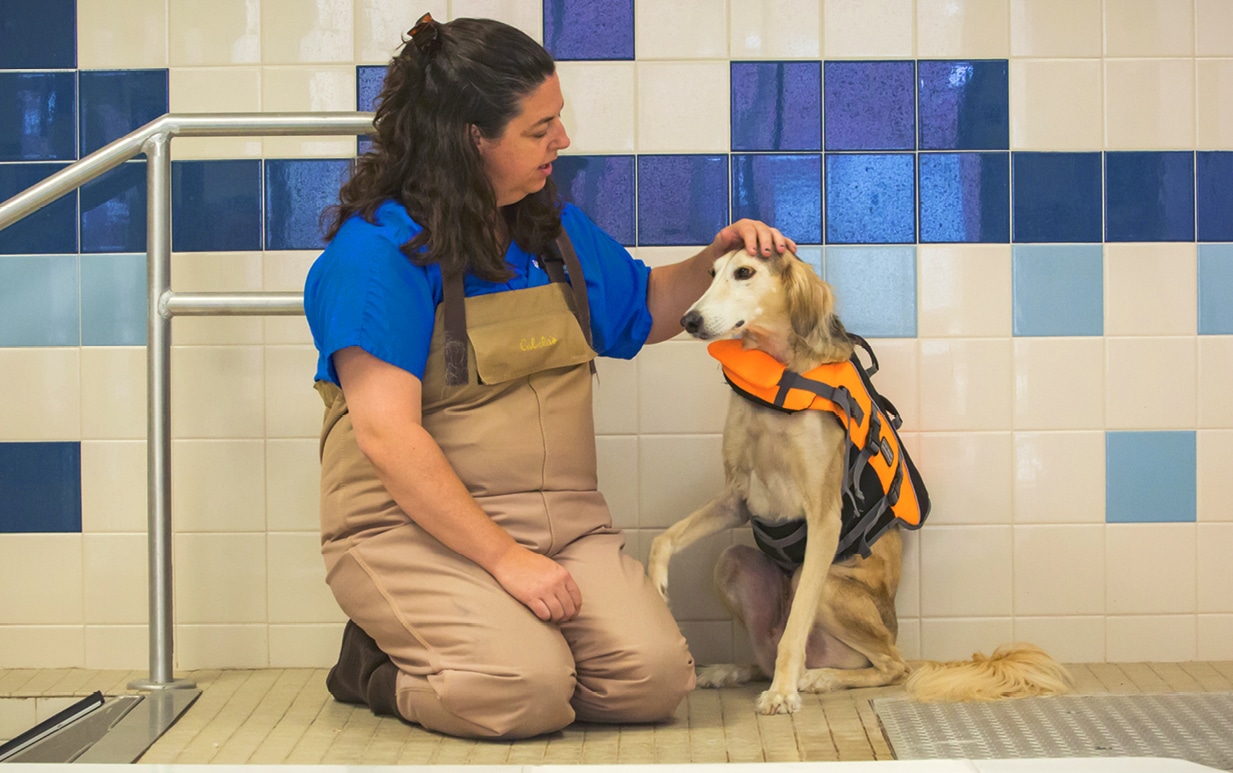 Swimming was just one of the many therapies used to help Natalia regain strength and function in her atrophied muscles. Wendy says, “You don’t typically think of sighthounds as swimmers, but Natalia taught me she could swim just as well as a Labrador!“

We used everything we had in our rehabilitation arsenal. For 7 months, I worked closely with Natalia, performing laser therapy, therapeutic ultrasound, swimming, underwater treadmill exercises, passive range of motion exercises, massage, transcutaneous electrical nerve stimulation, and neuromuscular electrical stimulation to prepare her for surgery. She was an amazing patient and never once complained or refused any of her treatments. Eventually, she was able to have surgery to repair the avulsion fracture, and since then, she has healed very well and been adopted by her foster mother.

I guess that’s the part that really sticks with me, how resilient Natalia is. Despite beginning her life dodging bullets and thrown rocks on the streets of Qatar, she is still a wonderful dog. I would’ve expected her to be a cowering, timid girl when approached by people, but she is just the opposite. She loves people and attention.

It never ceases to amaze me how animals can go through such great trauma and still remain trusting and loving. Working as a rehabilitation technician has allowed me to help many animals over the years, and all of them have their own stories, but one thing always remains consistent: they never give up.