Passion Project: Going the Extra Mile for Pets in Need

Read how one woman's heart led her to create a CARE fund for pets in need at her hospital.

Angel graduated from Macomb Community College’s Veterinary Technology Program in 2007. After 1 year of working in Michigan, she decided to move back home to Georgia where she now works as an RVT. She then enrolled at St. Petersburg College and earned her bachelor’s degree in veterinary technology and practice management. She joined Georgia Veterinary Associates in 2010. With a great understanding of all the positions and needs of the hospitals, she is now the Operations Manager for all 4 GVA locations. Angel helped start the CARE Fund in 2014 and was recognized with the 2019 American Humane Hero Veterinary Nurse Award, a national award that honors those behind the scenes in animal medicine.

When Oakley arrived at Russell Ridge Animal Hospital, he had an obvious gunshot wound to his head and an injury to his mandible. Gross and oozing from his wound, Oakley approached me and wagged his tail. His pain and misery was evident, but he still had energy and faith to approach me with trust in his eyes. My heart was full of pain and amazement for him.

In a way, how we were able to help him had its beginnings years earlier.

I am like most veterinary nurses in the sense that I have a passion for animals. I went to school to become a veterinary technician with no intention of this being my final career choice. My childhood vision included becoming an animal doctor and living on a farm in Montana.

When I graduated tech school I had never worked in a practice; actually, my first paying job was my last externship site. My experience inside an animal hospital was minimal, but from my first day on the job I knew this would be my career path.

I immediately recognized the amount of time and attention the veterinary nurses were able to give to the patients. I fell in love with people and their love for their pets. The most rewarding and exciting thing to me is to see a family or an individual care for their pet. Typically, I witness this most in the exam room, when someone agrees to annual bloodwork for their 2-year-old dog or when someone agrees to purchase heartworm prevention for their cat. Good health care is a sign of love and it’s inspiring!

I started working with Georgia Veterinary Associates in 2010. At the time, GVA was a small group of 3 hospitals; I worked at Hamilton Ridge Animal Hospital as the only RVT in the entire company. This is where I was first introduced to the idea of rescue work. Back then, this clinic had a couple of clients who tended to feral cat colonies. These cats would come into the clinic in traps, terrified. The clients tending to the colonies would know a little bit about each of them, and it was obvious they enjoyed caring for these cats. The county had a huge overpopulation of feral cats at the time, and their goals were to trap, alter, and release them back out into the population. I always thought the generosity of these clients to care for cats like this was an amazing show of selflessness.

As my career with GVA progressed, my role within the practices changed and I moved from Hamilton Ridge Animal Hospital to Russell Ridge Animal Hospital. Russell Ridge is the largest free-standing location in the group and has all the bells and whistles. The rescue work here was different than the trap-and-release work we were previously doing. Here, we worked with a large rescue organization, seeing their sick and surgery cases. We would see dogs that were neglected and surrendered, emaciated and broken, and cats with upper respiratory infections so bad they couldn’t open their eyes.

For the first time in my career I started to lose faith in people and their love of animals. These rescue groups were limited at times to what they could do for an animal either because they were out of funds or there were so many pets that needed their help. We would be told to wait until more funding was available before the group could commit to further treatment. It was disheartening. These rescue group workers are amazing people and I commend them for that, but I felt that we, as the veterinary facility, should be able to do more.

In June 2014, Dr. Brad Miller and I created the Companion Animal Rescue and Emergency Fund (CARE Fund). The idea for the CARE Fund stemmed from one idea: what would we do to change the life of some pets in need if money weren’t an issue? Originally when we started the fund, we asked our team for donations. We started with a T-shirt day—if staff gave to the CARE Fund, they could wear their GVA-branded shirt to work instead of their scrub top. We did small things like this to help raise money initially, but our team was already giving so much to pets in need.

We held other fundraising events such as spirit nights at local restaurants, where portions of the sales went to the CARE Fund. At local festivals we set up booths and sold doggie snow cones—shaved ice with chicken or vegetable broth—for donations. We tried to get the word out about the CARE Fund and how the funds would be used. We had clients that elected to donate to the CARE Fund in their pet’s memory. We also host an annual 5K race to raise money.

The CARE Fund earnings could be used to help pets in need. This meant if clients had financial hardships we could help them get care for their pet, the next time someone dropped a box of kittens off at the front door we didn’t have to call animal control to pick them up, and the next dog that was tied out in front of the clinic didn’t get shipped off to a rescue group. We were so excited about the CARE Fund.

The first pet we were going to use the funds for was the dog of a child with autism. The dog had a broken leg that required amputation—we lost this dog under anesthesia. All the excitement about the CARE Fund was completely deflated. However, it’s when you feel like you have nothing left to give that you must give a little more—and that’s when miracles happen.

That’s what we did with the CARE Fund—we kept pouring efforts into fundraising and helping pets when sweet, trusting Oakley came into our lives.

I got a call from a woman who helped with rescue groups in south Georgia. She said she’d learned about our CARE Fund from a festival we had attended and needed help with Oakley. He was in a high kill shelter after being shot in the head and left to die in a ditch. 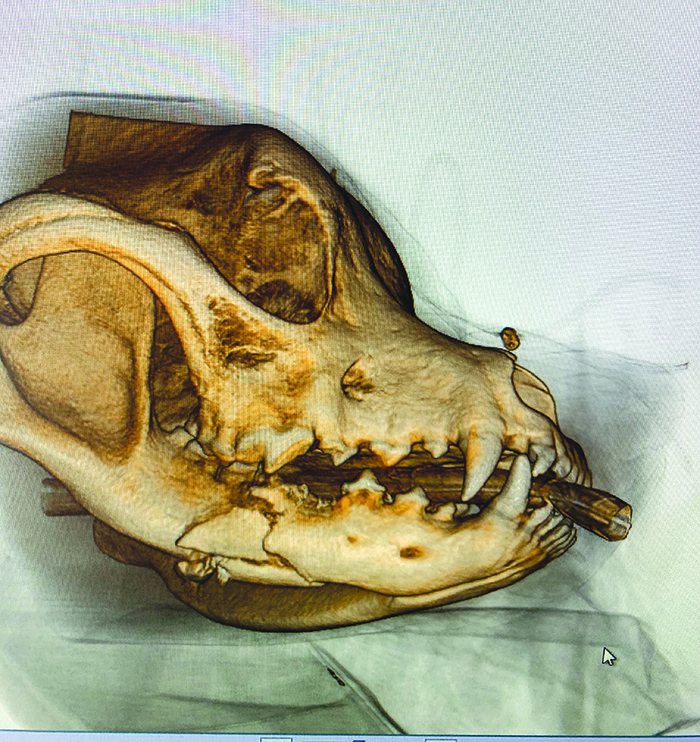 The shelter would only allow her to pull him if she had a veterinarian to take him to. She called me after she had exhausted her resources and no one would help her pull him from the shelter. Without question we agreed, thanks to the money from the CARE Fund and the surgical skill of Dr. Brad Miller.

Oakley was pulled from the shelter and driven 4 hours to our clinic. Once Oakley was evaluated, we sedated him and performed a CT of his skull, which revealed the trajectory of the bullet entering his skull, passing through his sinus, and exiting his mandible. How could someone do this to a dog?

Dr. Miller felt that plating his jaw was a better option than removing it. So, we took Oakley to surgery and after a plate, a few screws, and a few less teeth he recovered smoothly and was eager to greet people again. Oakley stayed in the clinic for a couple weeks as we wanted to see how the plate and his gum tissue would respond and ensure that he would continue to eat well. Oakley was in and out of the clinic for repeat CT scans and re-checks for 6 months.

The CARE Fund allowed us to give complete care to Oakley; 6 months after his procedure, he was adopted out to a loving family in Canada.