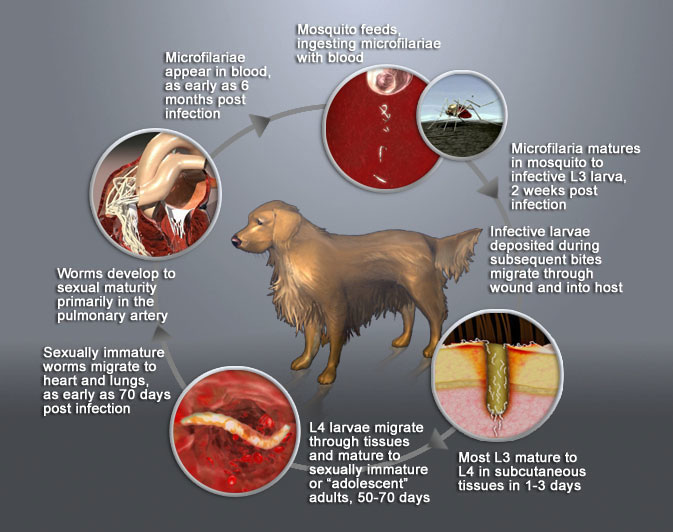 A dog with an active heartworm infection. Microscopic larvae are produced by adult worms and circulate in the blood. Larvae appear in the dog’s blood about 6 to 9 months after infection. CAPC’s recommendation for year-round heartworm protection and annual testing is more important than ever to ensure dogs and cats are protected — no matter where they live or travel. Illustration Credit: Courtesy CAPC.

“What the new CAPC Top 10 Cities Heartworm Report demonstrates is that heartworm disease — transmitted by mosquitoes — is a national threat to pets who are increasingly vulnerable to this debilitating and potentially fatal illness in most communities across the country,” said Dr. Michael Yabsley, CAPC board member and professor in the Department of Population Health, College of Veterinary Medicine and Warnell School of Forestry and Natural Resources at the University of Georgia. “It takes just one heartworm-infected dog in an area to become a reservoir of infection, increasing the number of infected mosquitoes and ultimately spreading the heartworm parasite to unprotected dogs and cats. This is why CAPC recommends monthly heartworm protection and annual testing for both heartworm antigens and microfilariae —regardless of where pets live or travel.”

During January 2019, these 10 U.S. cities had the highest percentage increase in positive heartworm tests:

Pets in cities on this month’s CAPC Top 10 Cities Heartworm Report may have been exposed locally or travel-related exposure may have been a contributing factor to the increase in positive tests. Other factors include transporting of shelter dogs, pet owner compliance in administering monthly heartworm preventatives, changing weather patterns and mosquito microclimates.

Nationally, prevalence rates for heartworm have risen each of the last five years and are now up 20% from 2013 levels, according to CAPC. “Many pet owners mistakenly think their dog or cat isn’t at risk for heartworm because they don’t live in what has been historically considered a heartworm ‘endemic’ region of the country. “This is no longer the case,” said Dr. Cassan Pulaski, DVM, MPH, CAPC board member and Merck Resident in Veterinary Parasitology, School of Veterinary Medicine at Louisiana State University. “While southern regions of the country have historically been associated with heartworm, we now know pets all over the country are potentially at risk for heartworm disease throughout the year.”

When a mosquito bites an infected dog, it transfers the microscopic heartworm parasite (larvae) to the next dog or cat it bites. It only takes one heartworm-infected dog to substantially increase the number of infected mosquitos that can transmit heartworm parasites. This was clearly demonstrated in a study published in the Journal of Medical Entomology which found over 73% of mosquitoes collected inside the kennel of just one heartworm-infected dog, demonstrating that “a single heartworm-positive dog potentially increases infection pressure on susceptible animals sharing mosquito exposure.”

Regardless of where you live, the risk for heartworm is ever-present due, in large part, to mosquito microclimates. “No matter the temperature, mosquitoes can thrive in sewers, stormwater drains, crawl spaces, alleys and other warm spaces where they survive and feed through winter months,”said Craig Prior, a veterinarian and former owner of VCA Murphy Road Animal Hospital in Nashville, Tennessee, and past president of the CAPC board of directors. “There can be two feet of snow on the streets, but between high-rise buildings, it may be 50 degrees and wet —a perfect environment for mosquitos to breed.”

Heartworm disease has likely become more widespread in the U.S. due, in part, to pet owners who are increasingly traveling with their pets — exposing them to varying, unpredictable temperatures and heartworm-positive dogs. According to a 2017-18 American Pet Products Association survey, 37% of pet owners are traveling with their pets every year – up from 19% a decade ago. And a recent TripAdvisor survey indicates travel with pets is expected to rise 49%.

Another reason heartworm disease has become more widespread in the U.S. is likely due to increased transportation of rescue dogs from regions with higher heartworm prevalence to areas where the disease was previously uncommon. Due to financial and time constraints of rescue and shelter groups — particularly during natural disasters —many animals are not protected, have missed a monthly dose or have not been tested or treated for heartworm.

While CAPC supports efforts to find every rescue dog a home, pet owners need to understand that imported dogs may be unwittingly infected with heartworms and become a reservoir of infection in their communities.

In 2017, for example, more than 31,000 rescue dogs were transported from southern U.S. states to Colorado where they’re considered to have a higher likelihood of being adopted.

“In an increasingly mobile society, pets are vulnerable to heartworm disease in every community,” Prior added. “The neighbor next door may have adopted a new rescue dog and, despite good intentions, hasn’t yet had it tested for heartworms. Meanwhile, it may be heartworm positive, posing a high risk of exposure to your pet.”

Not Worth the Risk

“Most people consider their pets as family members and wouldn’t knowingly expose them to infection with a potentially fatal disease that can ultimately compromise the length and quality of their lives. Yet millions who fail to protect their pets every month from heartworm infection are doing just that,” Prior added. “The risk just isn’t worth it. Heartworm preventatives are affordable, safe and effective. This is why CAPC recommends all pets, no matter where they live, be tested annually and placed on heartworm preventatives 12 months of the year.”

In addition to the cities in CAPC Top 10 Heartworm Report, many other communities also are experiencing increases in heartworm prevalence. To help pet parents and veterinarians monitor heartworm prevalence in their community, CAPC provides a monthly, county-by-county heartworm disease forecast.

“It’s our hope that the monthly CAPC Top 10 Cities Heartworm Report — along with our 30-day Parasite Forecast Maps — will prompt important conversations between pet owners and their veterinarians about heartworm protection,” said Dr. Chris Carpenter, DVM and CAPC’s chief executive officer. “The increasing prevalence of heartworm disease across the U.S. is why CAPC recommends year-round heartworm preventatives and annual testing for all dogs and cats — no matter where they live or travel.”

Read about the effect of traveling with dogs and the spread of heartworm disease in Have Dog, Will Travel.

ABOUT CAPC
The Companion Animal Parasite Council (www.capcvet.org) is an independent not-for-profit foundation comprised of parasitologists, veterinarians, medical, public health and other professionals that provides information for the optimal control of internal and external parasites that threaten the health of pets and people. Formed in 2002, the CAPC works to help veterinary professionals and pet owners develop the best practices in parasite management that protect pets from parasitic infections and reduce the risk of zoonotic parasite transmission.