An ECG Through the Eye?

Sudden Acquired Retinal Degeneration Syndrome (SARDS) is one of the most frustrating ocular diseases seen in veterinary medicine.

Holly practices in the Ophthalmology Service at the University of Florida College of Veterinary Medicine. In 2005, Holly graduated from Wells College with a BS in Biochemistry and Microbiology. She earned her CVT in 2013, and her VTS from the Academy of Veterinary Ophthalmic Technicians in 2017. She and 8 other members became the first VTS technicians in the field of veterinary ophthalmology. Holly lectures annually at her institution’s Technician Continuing Education Conference and has presented at the Ophthalmology Technician Continuing Education Conference. Her passions include helping educate future veterinarians, veterinary ophthalmologists and veterinary nurses, and advocating for her patients.

This case report describes an abnormal electroretinogram (ERG) obtained from a patient with a pacemaker and a diagnosis of sudden acquired retinal degeneration syndrome (SARDS). SARDS is one of the most frustrating ocular diseases seen in veterinary medicine.

As the name implies, SARDS is a retinal disorder that results in sudden and permanent blindness in adult dogs. The cause is unknown and no treatment exists. Clinical signs are characterized by a sudden (usually within days) loss of vision, pupillary dilation and unresponsiveness, absence of early ophthalmoscopic fundus abnormalities, and an extinguished ERG (meaning an absent response). The disease can affect all breeds, even mixed breeds. Most commonly affected are middle-aged, female, small-breed dogs (especially dachshunds, pugs, miniature schnauzers) and mixed–breed dogs. Affected dogs are usually otherwise healthy.1

Although SARDS was first reported almost 4 decades ago, its precise etiology is still being extensively debated and no clear consensus has been reached. One hypothesis is that SARDS is an autoimmune disease, similar to nonparaneoplastic autoimmune retinopathies in humans, with a strong autoantibody component. This hypothesis is based on limited molecular and histologic data and findings of retinal autoantibodies in serum samples of SARDS patients. However, lack of intraocular inflammatory changes supports the argument that SARDS is a noninflammatory syndrome.2

What Is an ERG?

An ERG is the recorded electrical response of the retina to light stimulation. It is used mainly to establish retinal function when the fundus cannot be directly visualized because of opacification (usually a cataract). Electroretinography can also be used in an eye that appears normal, to investigate causes of sudden blindness and differentiate SARDS from optic neuritis, progressive retinal atrophy, or central blindness. Recording an ERG is not a painful procedure and is usually performed on awake patients, but it does require patient cooperation. Light sedation (e.g., butorphanol and acepromazine) can facilitate the procedure, although sometimes no sedation is used in patients with systemic disease. General anesthesia is usually avoided because of its effects on the retina’s response time to the stimulus.

Before ERG testing, the patient’s pupils are adapted to the dark for a minimum of 5 minutes, usually 20 minutes, so that the retina is maximally sensitive to the stimulating light. If the patient’s pupils are not already dilated, pharmacologic dilation is achieved with tropicamide 1% ophthalmic solution. A topical anesthetic (e.g., tetracaine 0.5% or proparacaine 0.5%) is then applied to the cornea. A special contact lens electrode filled with a viscous gel (e.g., hypromellose 2%) is placed on the cornea, and ground and reference needles are placed subcutaneously, usually at the base of the skull and lateral canthus, respectively. These needles are connected to a computer system and a light source.

Different light stimulation protocols are used (e.g., single flashes of light at differing intensities, flickers of light), which can stimulate rods and cones separately. The response of the retina is recorded graphically and then measured.3

The patient was an 11-year-old male, neutered, 10-kg, mixed-breed dog, presented to the Ophthalmology Service at the University of Florida College of Veterinary Medicine for evaluation of vision problems. Initial complaints included a 1-month history of bumping into furniture, not catching treats that were tossed to him, decreased activity, and seeming more nervous. Other signs included polydipsia, polyphagia, and a dry cough. The patient also had a chronic history of irritable bowel disease and third-degree atrioventricular block (managed with a single pacemaker lead placed in his right ventricle 2 years previously).

During the initial examination, the patient was bright, alert, and responsive. He was normothermic (100.7 °F/ 38.16 °C) and ambulatory. His mucous membranes were pink and tacky with a capillary refill time of <2 seconds. His heart rate was 80 beats per minute with a regular rhythm and no murmur noted. His femoral pulses were strong and synchronous. His respiratory rate was 24 breaths per minute, and lung sounds were clear. He was normotensive (Doppler systolic blood pressure 150 mm Hg).

Ophthalmic examination indicated that both eyes (OU, oculus uterque) seemed to be comfortable with no ocular discharge. The patient’s dazzle reflex was inconsistent and menace response was absent. Direct and consensual pupillary light responses were present but weak. The rest of the ophthalmic examination findings were within normal limits, except for nuclear sclerosis, incipient cataracts, and mild iris atrophy in both eyes. Dilated fundic examination findings were within normal limits in the right eye (OD, oculus dextrus), but the left eye (OS, oculus sinister) had multifocal areas of hyperreflectivity in the dorsal tapetum, consistent with retinal degeneration. Results for Schirmer tear testing, intraocular pressures, and fluorescein dye staining were within normal limits in both eyes. Because the patient’s bilateral visual deficits were not consistent with his unilateral (OS) fundus changes, an electroretinography to test for retinal diseases such as progressive retinal atrophy or SARDS was recommended. I discussed the diagnoses and prognoses for these conditions with the clients, explaining that an ERG within normal limits would indicate a disease process of the optic nerves and/or central nervous system. Further diagnostic testing for the patient’s systemic issues was also recommended. The clients then scheduled an appointment with the University of Florida College of Veterinary Medicine Internal Medicine Service for later that week and, because the dog was still visual, postponed the electroretinography until after the medicine workup had been completed.

However, 4 days later, the clients again brought the dog to our Ophthalmology Service because of apparent sudden and complete vision loss. He was now running into things and vocalizing more. His vital signs remained within normal limits. Ophthalmic examination findings were the same as the initial findings except at this time his dazzle response was absent bilaterally. The patient was unable to track a dropped cotton ball or navigate through the room in light or dark conditions. Differential diagnoses for acute blindness included progressive retinal atrophy, SARDS, retinitis, optic neuritis, and blindness secondary to endocrinopathy. Again, recommendations included an electroretinography and a systemic workup to help determine the cause of his sudden blindness, along with keeping furniture and food and water bowls in the same locations at home and keeping the dog on a leash while outside. 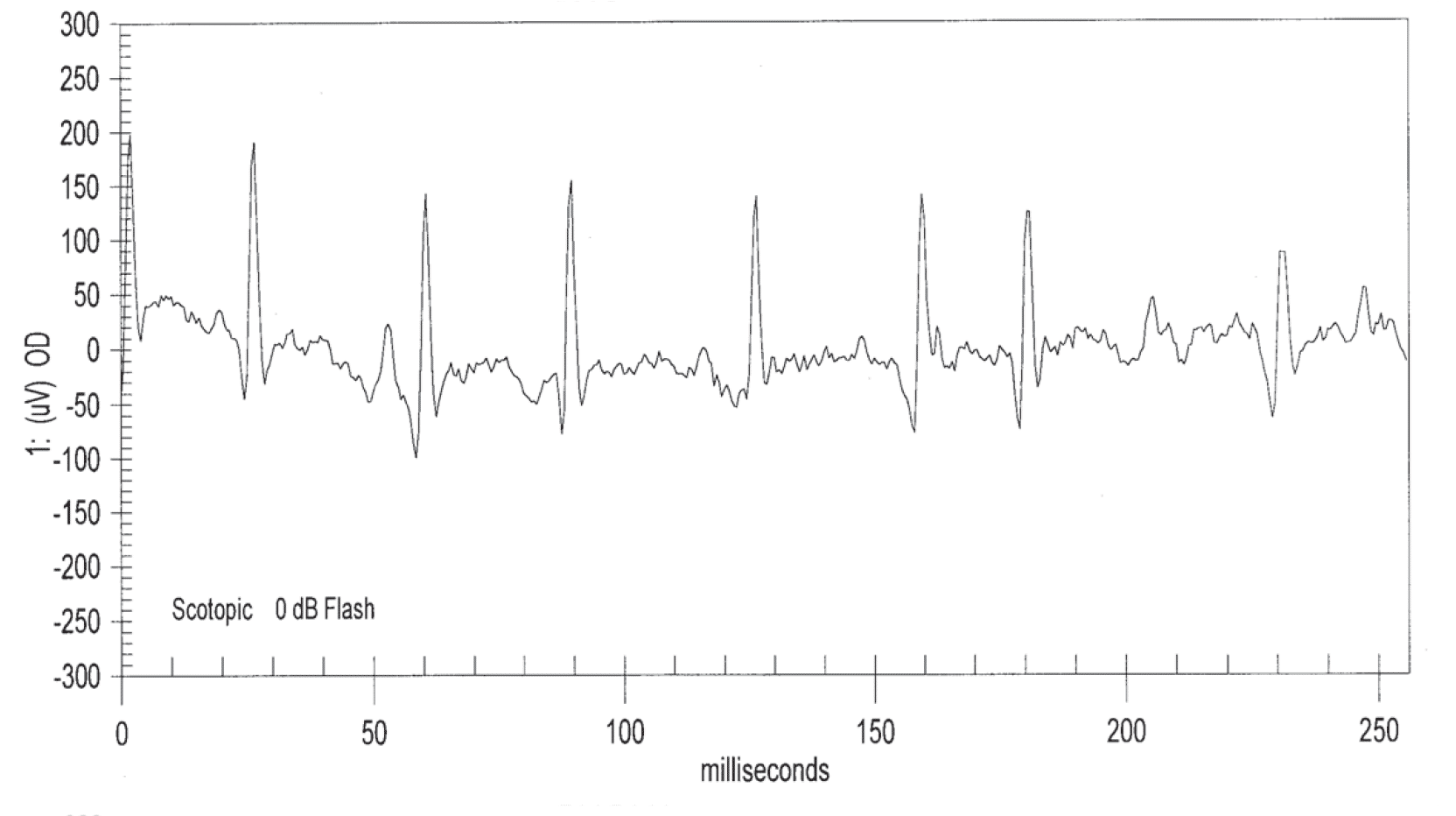 Figure 1. ERG tracings of the patient’s eyes. (A) Right eye. 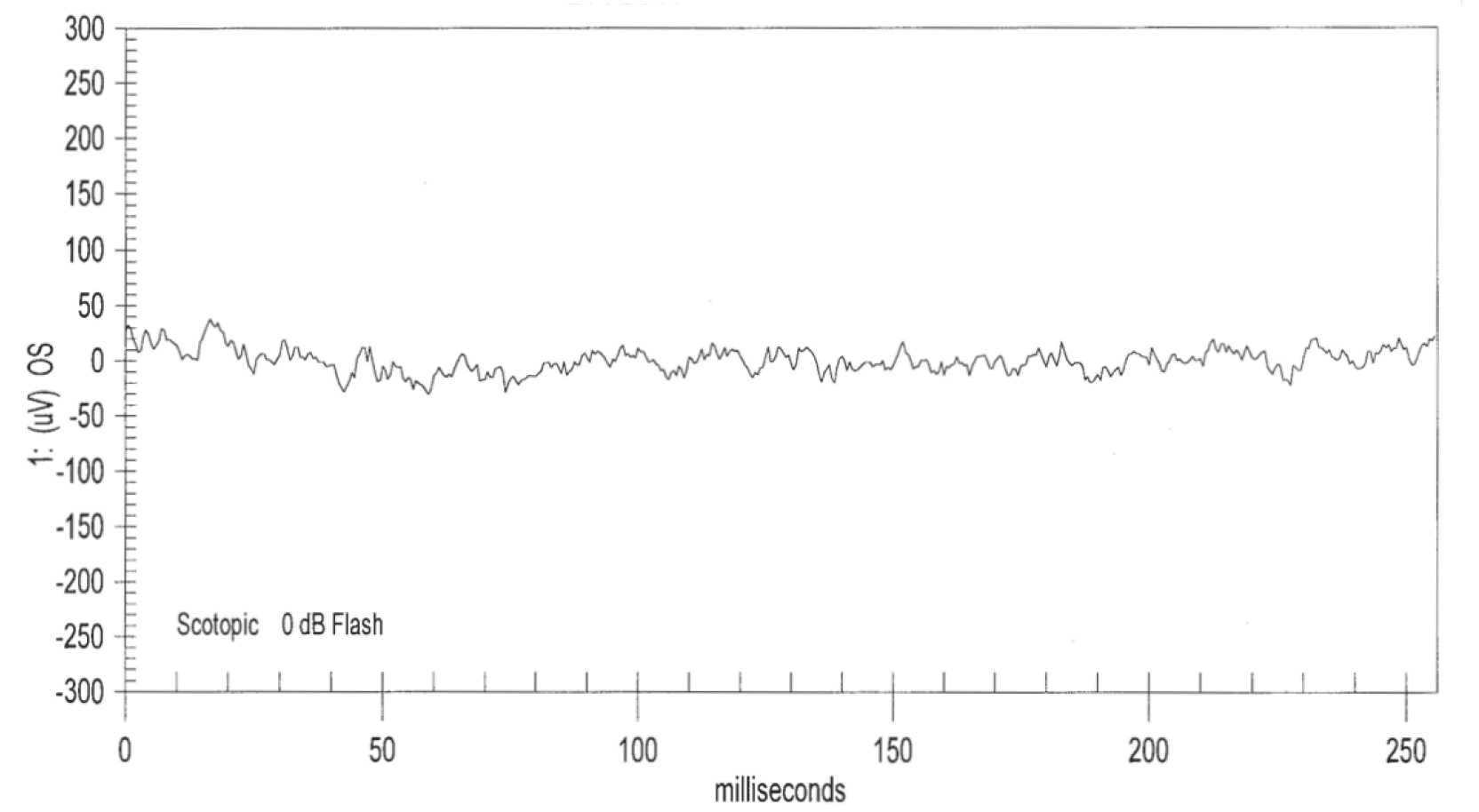 On an ERG, the a-wave is the first negative deflection of the wavelet (FIGURE 2) and reflects hyperpolarization of retinal photoreceptors. The b-wave is the next positive peak (FIGURE 2) and reflects the activity of second-order neurons (bipolar and Müller cells) of the retina. As can be seen from the tracings for this patient, the left eye ERG tracing is relatively unresponsive, which, in combination with the acute bilateral loss of vision, confirms a diagnosis of SARDS. 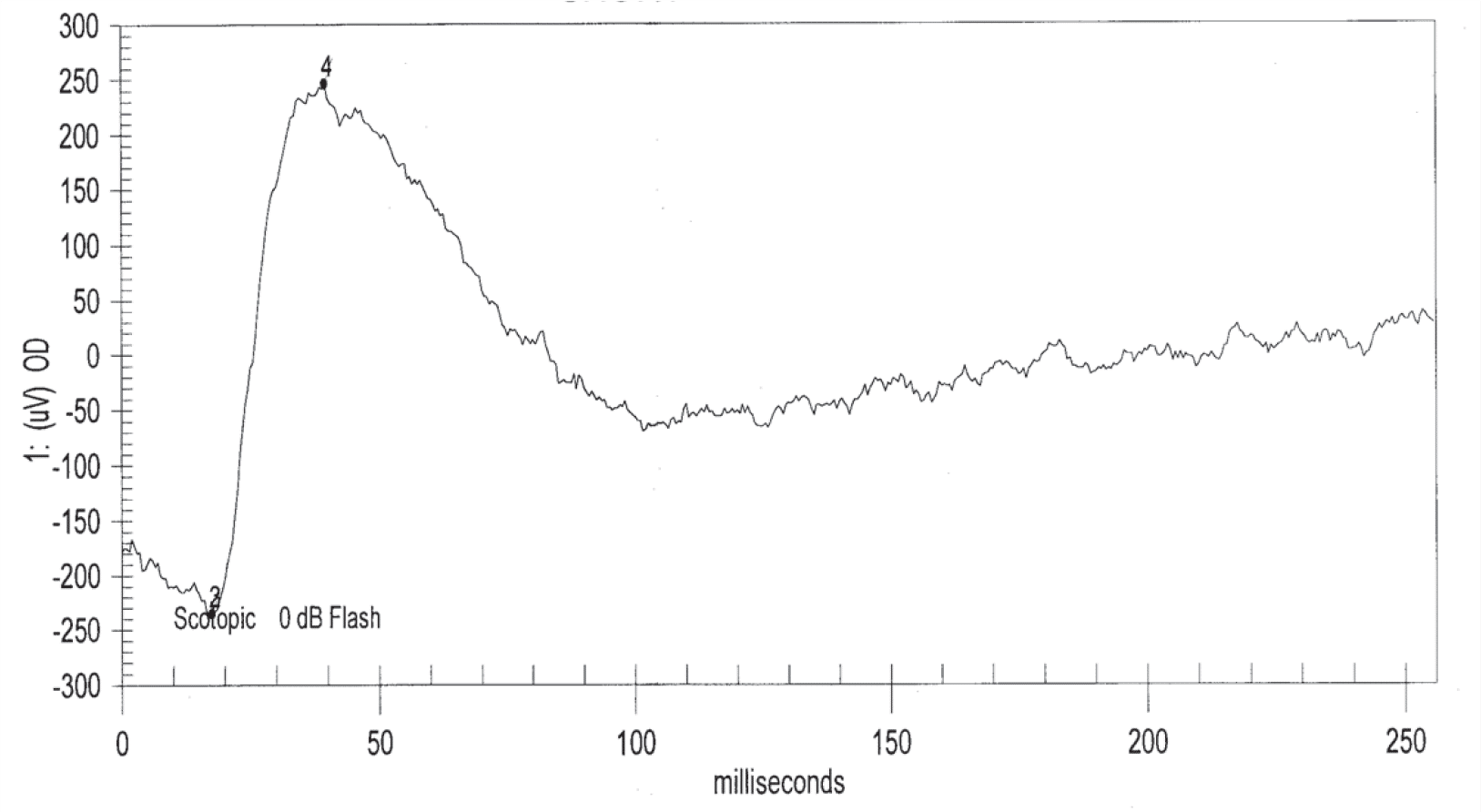 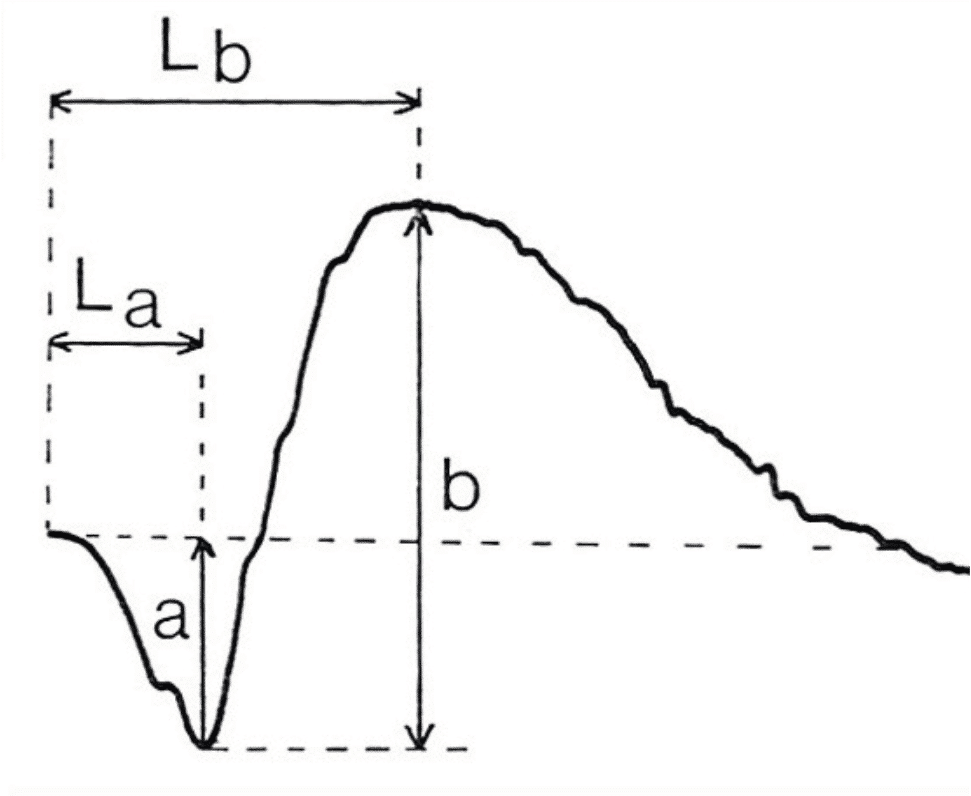 The right eye ERG tracing is abnormal but similar to an ECG tracing (FIGURE 3). This result was repeatable. 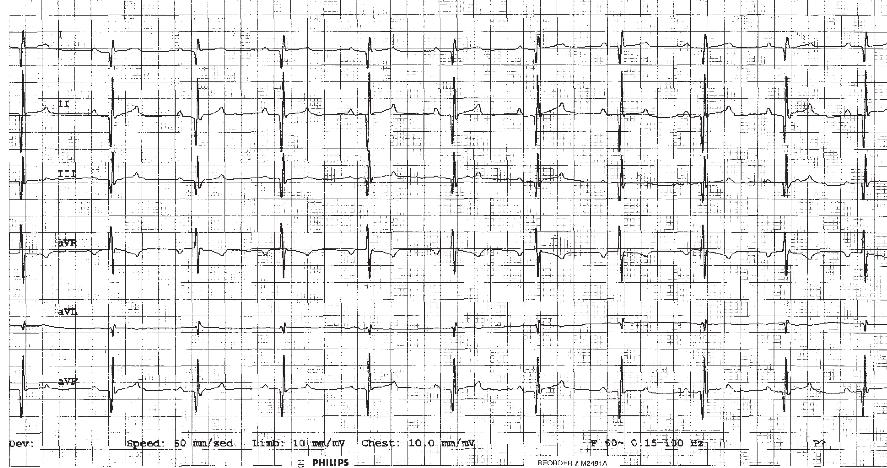 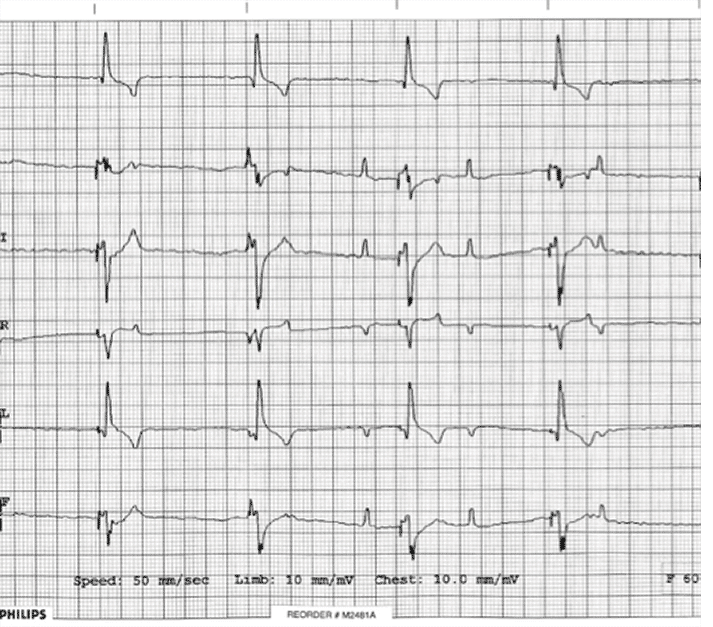 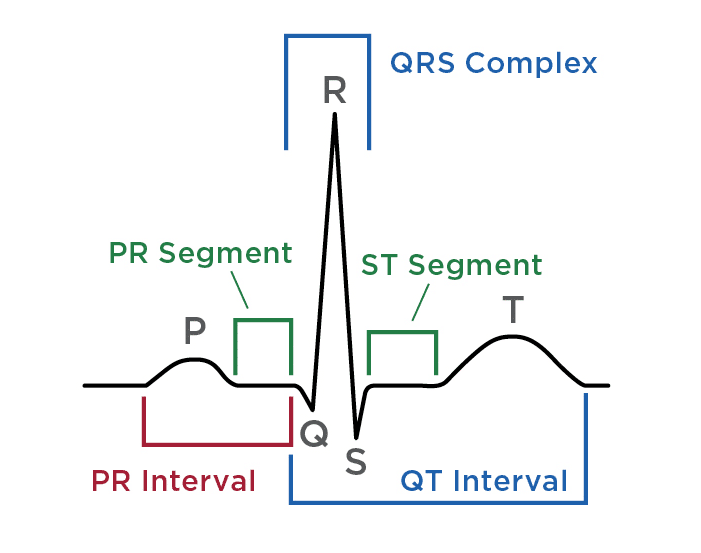 The patient’s diagnosis was SARDS. The clients were informed that the cause of and treatment for SARDS remain unknown, that the blindness associated with SARDS is permanent, and that the dog would not regain his vision. The value of maintaining a consistent home environment was again discussed with the clients, reinforcing the recommendation to not move the dog’s food and water bowls or furniture and to keep him on a leash when taking him outside. The clients were told that the dog should adjust to being blind, and they were given literature about how to care for a blind dog and about Halos for Paws (halosforpaws.com, a bumper guard for blind dogs that helps them navigate without injuring, frightening, or discouraging themselves by bumping into unseen objects).

The patient returned for a recheck 6 weeks later, when the clients noticed increased epiphora. Physical examination findings were within normal limits. For both eyes, ophthalmic examination findings remained static from the last examination except the retinal vessels were mildly attenuated, Schirmer tear test results and intraocular pressures were within normal limits, and staining with fluorescein and Rose Bengal was negative. Using a 24-gauge ¾-inch catheter, we were able to cannulate and flush both upper and lower nasolacrimal ducts with no resistance. The fundic changes were consistent with the diagnosis of SARDS. Monitoring and recheck examinations were recommended on an as-needed basis.

In this case, the patient’s ERG tracings were consistent with SARDS; however, the right eye tracing resembled an ECG. This similarity most likely resulted from the dog having had a pacemaker lead placed in his right ventricle. To my knowledge, electroretinography detection of cardiac electrical activity has not been previously described in the literature, perhaps because there are so few dogs with pacemakers who need electroretinography.

Cases of SARDS have been reported only for dogs. This acute onset of retinal degeneration is typically exhibited by acute blindness with dilated, nonresponsive pupils. Despite this case being in a male dog, the disease is most common in middle-aged, spayed female dogs. A history of recent polyuria, polydipsia, weight gain, and lethargy is typical. A significant percentage of patients have a blood profile suggestive of hyperadrenocorticism with lymphopenia, elevated alkaline phosphatase, hypercholesterolemia, and an abnormal ACTH stimulation test result.5 Initially, the fundus looks normal, although ophthalmoscopic signs of progressive retinal degeneration may appear over the next few months. Because an animal with retrobulbar optic neuritis may also exhibit similar signs of acute blindness, electroretinography is particularly useful for distinguishing between the 2 diseases. The signal is normal in animals with optic neuritis but extinguished in animals with SARDS. Although SARDS is defined as an acquired disease, intensive research has not yet identified the primary cause. The most commonly accepted explanation is that SARDS is the result of an endocrinologic disorder. Unfortunately, because the primary cause has yet to be identified, there is currently no treatment for SARDS, and the blindness is irreversible. Client education is crucial.

Cataracts in Dogs: The Importance of Early Detection and Management