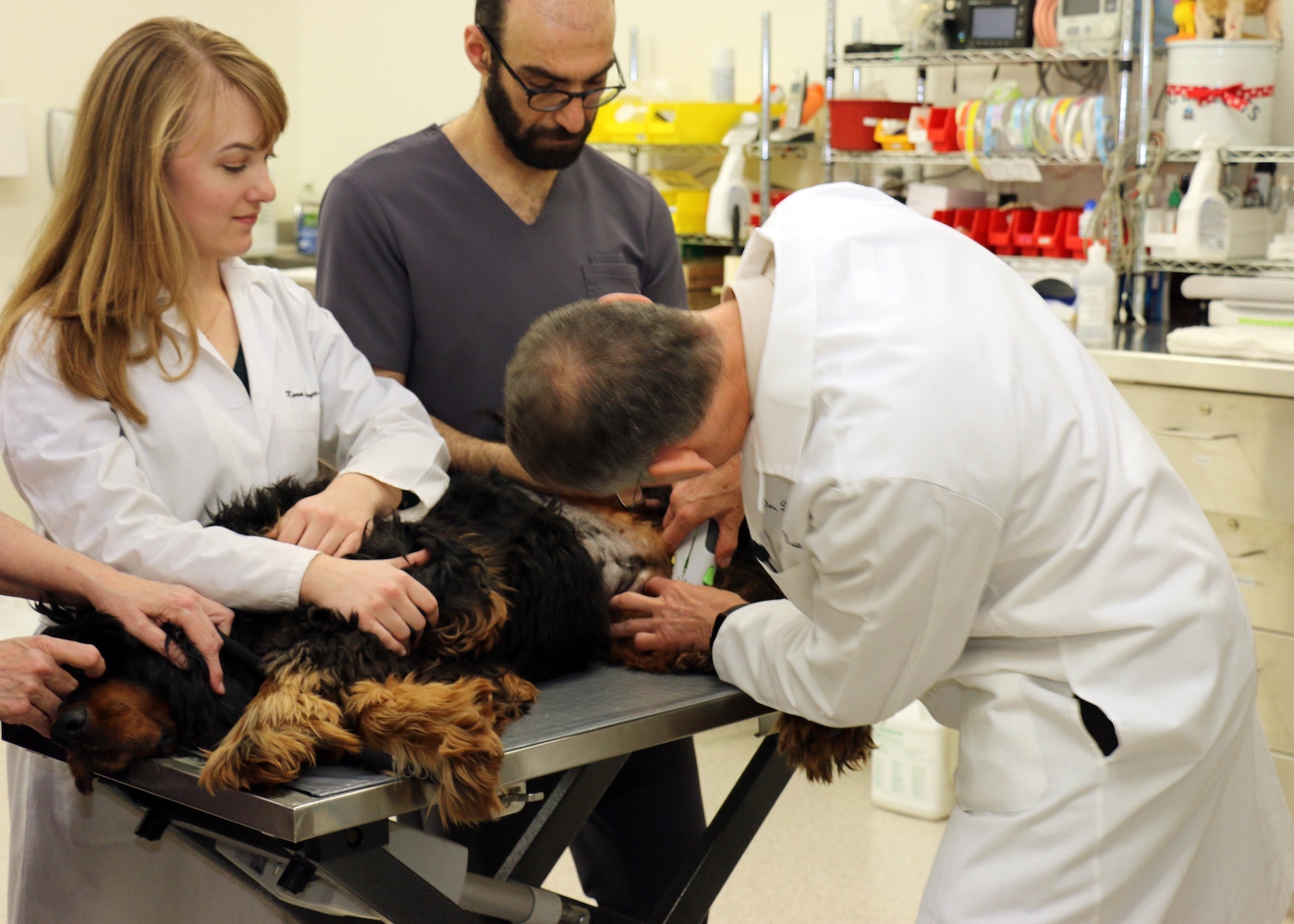 David Vail, right, professor and oncologist at the UW School of Veterinary Medicine, delivers the very first vaccine in the Vaccination Against Canine Cancer Study to Trilly, a nine-year-old Gordon Setter, as she is held by veterinarian Kara Magee, left, and veterinary technician Rubi Hayem. Photo Credit Meghan Lepisto, University of Wisconsin - Madison

University of Wisconsin – Madison School of Veterinary Medicine — On Thursday, May 2, the very first dog received the very first vaccine intended to protect her from cancer. And soon after the 9-year-old Gordon setter named Trilly received her shot, so, too, did Norton, a 9-year-old rat terrier mix.

“We’re testing a totally novel way of creating an anti-cancer immune response,” says David Vail, a professor and board-certified oncologist at the University of Wisconsin–Madison School of Veterinary Medicine. “The holy grail would be to prevent cancer as opposed to waiting for it to start and then treating it.”

If the vaccine works in dogs, Vail says, it may not only provide a new strategy for addressing a critical canine health concern, it might also work in people.

The Vaccination Against Canine Cancer Study, now underway, will evaluate a vaccine strategy for the prevention of cancer in dogs. Much like an influenza vaccine bolsters the body’s readiness to fight the flu, this preventative vaccine follows the same principle, “to have the immune system primed such that if a cancer cell develops, it will attack,” Vail says.

More than 800 patients are enrolled in the study, making it the largest clinical trial conducted to date for canine cancer, and across the history of veterinary medicine. The UW School of Veterinary Medicine is one of three participating institutions.

Cancer is the number one cause of illness and death in the aging dog population, with approximately one out of every three dogs affected and six million new cancer diagnoses made in dogs each year.

“The vaccine may not be effective, but this is probably the only approach to this type of vaccine, so we feel we have to try it. The implications of success would be quite large — for dogs and people,” says Stephen Albert Johnston, professor and director of the Center for Innovations in Medicine at Arizona State University, who developed the technology behind the vaccine.

Traditional vaccines work by introducing into the body a protein found on the surface of the virus that the vaccine is protecting against. The immune system sees the protein as a threat, establishes a memory of it, and, if there is a later infection, recognizes that protein and is primed to react.

The anti-cancer vaccine being tested targets approximately 30 abnormal proteins found on the surface of cancer cells. These proteins, a result of improperly coded RNA — so-called frame-shift mutations — are generally only found in patients with cancer (in dogs and people).

By injecting this cluster of proteins into healthy patients, along with a substance that stimulates an immune response, researchers believe the vaccine could serve as a universal defender against cancer by “turning on” the immune system.

The vaccine will target several cancers common to dogs, including lymphoma, a cancer of the lymphatic system; osteosarcoma, or bone cancer; hemangiosarcoma, a deadly cancer that originates in the blood vessels and is almost exclusive to dogs; and mastocytomas, or mast cell tumors.

The potential to preventively target several types of cancer with a single vaccine series would be a major paradigm shift in veterinary and human medicine, explains Vail, who is also a member of the UW Carbone Cancer Center.

Researchers at UW–Madison and elsewhere have developed a number of anti-cancer vaccines in recent decades for the treatment of cancer after it has been diagnosed. But those vaccines are tailored to a specific cancer type and are often produced for an individual patient, making broad deployment worldwide both time- and cost-prohibitive.

This year, nine million people around the world will die from cancer, Vail explains, and 70 percent of them are poor or living in developing countries where access to treatment may be limited. A preventative vaccine, if available to people, could be “applied globally at low expense,” he says, adding: “It’s a whole new way of looking at anti-cancer vaccines. The key is that you don’t have to personalize the vaccine to an individual, which is a very expensive proposition.”

Initial trials of the vaccine in mice suggest the new strategy could be successful, but many in the scientific community remain unsure.

The trial is slated to run over five years. Cancer-free, healthy dogs between the ages of six to 10 will be randomized to receive either a series of the investigational vaccine or placebo vaccines. (In fact, researchers don’t know which version Trilly and Norton received)

Two sets of vaccines will be given every two weeks, for a total of four treatments, and then annually. Researchers have not observed any side effects other than those typical to any vaccine, such as moderate local pain or swelling at the site of injection, in mice or dogs to date, but the study will characterize any unanticipated adverse reactions in the larger study population. 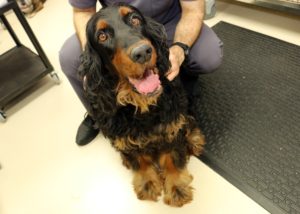 Trilly, a nine-year-old Gordon Setter, received the very first vaccine in the Vaccination Against Canine Cancer Study, a five-year clinical trial to evaluate a vaccine strategy for the prevention, rather than the treatment, of cancer in dogs. With more than 800 patients enrolled, it is the largest clinical trial conducted to date across the history of veterinary medicine. Photo Credit Meghan Lepisto, University of Wisconsin – Madison

Participating dogs will live at home and be checked two-to-three times yearly for five years after enrollment to monitor them for the development of any cancers. Their medical care will be covered by the study, which is funded by a $6 million grant from the Open Philanthropy Project. It is also supported by Calviri, Inc., a company Johnston started to commercialize the vaccine if it is effective.

“Even if a patient is randomized to the placebo group, they will enjoy five years of the best medical care available at no cost,” Vail notes. “And funds are available to diagnose and treat cancers that may develop in dogs in both the treatment and placebo group.”

About 280 dogs will be treated at UW Veterinary Care, with the remainder of participants at the other two trial sites, Colorado State University and the University of California, Davis. 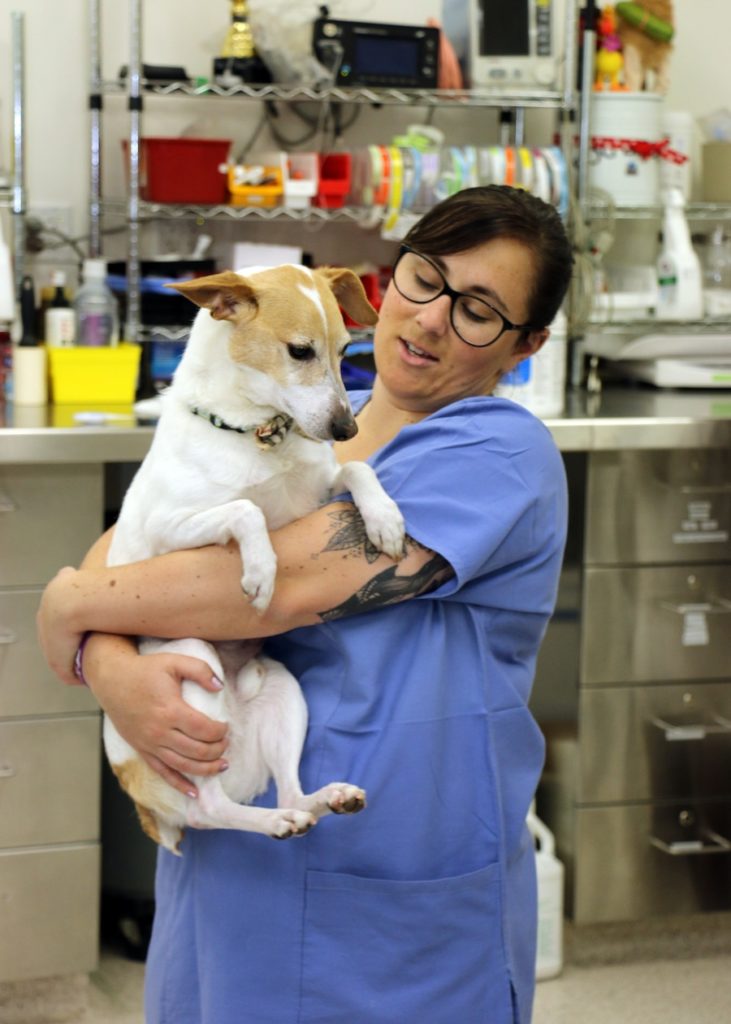 Veterinary technician Abbey Ace holds her dog Norton, a nine-year-old rat terrier mix, after he received one of the first vaccines in the Vaccination Against Canine Cancer Study, a five-year clinical trial to evaluate a vaccine strategy for the prevention of cancer in dogs. The UW School of Veterinary Medicine is one of three participating institutions. Photo Credit Meghan Lepisto, University of Wisconsin – Madison

The School of Veterinary Medicine is a national leader in the field of research known as comparative oncology, studying naturally occurring cancers in pets as models for human disease to advance new therapies and diagnostics that could benefit animals and people.

The array of information gleaned throughout the trial will also advance scientists’ understanding of cancer, the immune system, and how it responds, says Vail. “This is a team project involving dozens of researchers across the country and hundreds of pets and pet owners. We’re so thankful that they’re with us and that they want to strive to push the envelope as far as what we can do to prevent cancer in the future.”

Meghan Lepisto, the Publications and Media Relations Manager at University of Wisconsin-Madison School of Veterinary Medicine, wrote this article.