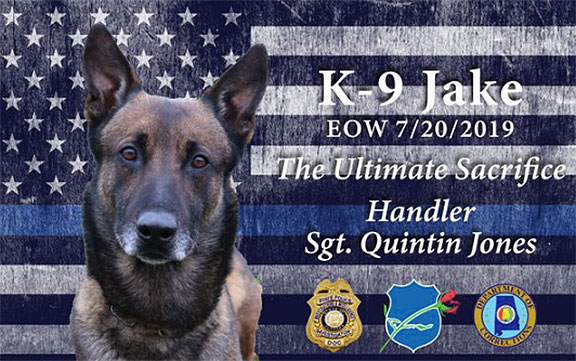 An Alabama Department of Corrections K9 officer that fell seriously ill after coming into contact with synthetic marijuana during a contraband raid at a state prison died two days later after developing pneumonia. Jake will be buried with full honors this week. Photo: Courtesy ADOC

When an Alabama Department of Corrections (ADOC) K9 officer named Jake fell seriously ill after coming into contact with synthetic marijuana during a contraband raid at a state prison on July 18, NAVC stayed in touch with spokesmen from both ADOC and Auburn University College of Veterinary Medicine this past weekend to get updates on Jake’s recovery. Sadly, we have learned that Jake died on Saturday afternoon from complications after developing pneumonia. Jake will be buried with full honors on July 30.

Jake was a 4-year-old Belgian Malinois that was employed all his life by ADOC. He was part of a team searching within a dorm at the Staton Correctional Facility in Elmore County. Jake used his training to expose a substance officials later determined to be synthetic marijuana, said Bob Horton, public information manager for ADOC.

“It’s a sad day for the Alabama Department of Corrections,” Horton told NAVC in an email.

The raid took place on July 18 about 9 p.m. when ADOC dispatched three emergency response teams to search a housing dorm for contraband, said Horton in a press release.

During the search, Jake alerted on a powdery substance. Within moments of detecting the substance, the K9 became unresponsive and was immediately transported to the Staton infirmary. Prison officials evacuated the dorm and requested assistance from the Montgomery County Fire and Rescue Hazardous Materials (HazMat) Unit.

A test by the HazMat team identified the substance as synthetic marijuana. The HazMat team continued search operations without finding additional contraband and cleared the dorm at approximately 4 a.m. on Friday, July 19.

Jake was taken from the Staton infirmary to an area veterinary hospital, and then transported to the Auburn University College of Veterinary Medicine Clinic.

Heroic Efforts to Save a Hero

“After alerting on the substance, Jake lost his balance and became unresponsive,” said Sgt. Quinton Jones, Jake’s handler. Registered nurses on staff with ADOC’s healthcare provider, Leanne Smith and Juanita Peavy, performed CPR on Jake in the prison courtyard and inserted an IV, which stabilized his condition. Smith remained with Jake and continued CPR until he was taken to Auburn University’s veterinary clinic.

At the time, Jones gave a statement thanking Jake’s medical caregivers: “I want to thank members of Staton’s medical staff, Leanne Smith and Juanita Peavy, for saving Jake’s life. Without their immediate response to Jake’s condition, he would not be alive today. They are heroes for saving his life.”

Initially, the Auburn University veterinary clinic staff reported that Jake’s condition had improved. Jake’s oxygen tube was replaced with an oxygen mask to facilitate his breathing. They reported that Jake was expected to recover.

By Saturday, however, his vitals were abnormal and his condition quickly deteriorated. Just two days after becoming ill, Jake died on July 20 at 3 p.m.

Synthetic marijuana, aka K2 or Spice, can be laced with more potent narcotics such as fentanyl — an opioid so powerful that just a tiny grain can cause death. In 2018, a rash of overdoses were connected to synthetic marijuana, some of which was found to contain rat poison. In Jake’s case, Jake was given Narcan, a medication designed to rapidly reverse opioid overdose and very quickly restore normal respiration to a person or animal whose breathing has slowed or stopped. Because the Narcan did not work for Jake, authorities determined the substance was synthetic marijuana not containing fentanyl, though “further analysis of the narcotic is pending.”

“I was saddened to hear that one of the Corrections K9s, Jake, lost his life over the weekend. This K9 died in service to public safety and in service to the state,” Ivey said in a prepared statement. “Jake is an example of the goodness, the loyalty and service that our four-legged friends provide. We certainly lost a loyal companion.”

Jake had been Jones’ partner since joining the ADOC in June 2014. In a statement, Jones praised his partner as “loyal,” and said he had an “impeccable record in counter-drug operations.” 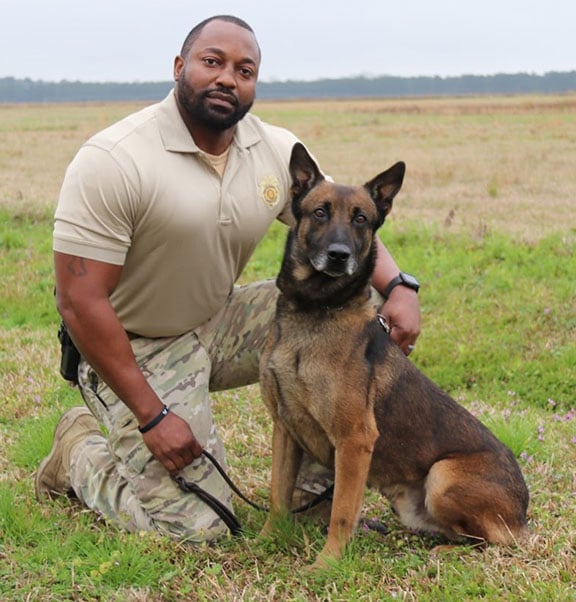 “This is a difficult time for our ADOC family and especially for Sgt. Jones and those assigned to our K9 Bureau who worked with Jake on a daily basis,” said Corrections Commissioner Jeff Dunn. “I extend our deepest condolences for the loss of this noble K9 who honorably served the State of Alabama and for ultimately giving his life while protecting the public.”

In the Line of Duty

Dunn added that Jake probably saved the lives of others by detecting the contraband during the search. “With Jake’s training and ability to find the narcotic, he saved other lives by giving his own in the line-of-duty,’’ Dunn said. “Jake’s heroism and ultimate sacrifice will never be forgotten,” added Dunn.

“Jake was one of our best narcotics detection K9s,” Arnaldo Mercado, the director of Investigations and Intelligence for counter-drug operations, said in a statement. “I ask that we keep Sgt. Jones and the ADOC family in our thoughts and prayers during this very difficult time.”

In addition to working in a variety of roles, such as narcotics detection and suspect apprehension, alongside their police officer handlers in the United States, K9s play a major role in American prisons and jails. It is a crime in most states to assault or kill a police animal. K9s are almost always cared for by their specific handlers; Jake has been with Sgt. Jones since he was a puppy.

Mercado said his division is conducting a criminal investigation and anyone found to be responsible in the K9’s death will be prosecuted to the fullest extent of the law.