Because otitis media and interna can be hard to diagnose without advanced imaging, it is important to take even subtle clinical signs seriously.

Kathleen graduated in 2007 from the Vet Tech Institute in Pittsburgh, Pennsylvania, with a degree in Veterinary Specialized Technology. In 2015, she received a Bachelor of Science degree from the University of Pittsburgh with a focus on chemistry, biology, and psychology. She has worked for 7 years in general practice and 7 years in specialty practice, primarily neurology.

On March 26, 2019, “Sam,” a 9-year-old, 4.7-kg, intact male domestic short-haired cat, underwent dental cleaning and extractions of teeth 308, 309, 408, and 409. During the procedure, a mass was found and determined to be a bony prominence from a broken tooth. He was discharged the same day but returned on March 29 due to hiding at home. Dental radiographs showed roots that remained from teeth 308 and 309, so they were extracted. Sam was then hospitalized for medication (clindamycin at 0.27 mg/kg PO q12h) and observation and was discharged on April 5.

At the time, the increased total protein and hypoalbuminemia were attributed to dehydration and inappetence.1,2 Hypoalbuminemia can be caused by malnutrition, liver disease, kidney disease, or sepsis.3 Elevated globulin indicates infection or inflammation.3 Hyperglycemia was correlated with the patient’s acute stress.2

During physical examination, Sam was bright, alert, and responsive. He was ambulatory but tetraparetic and knuckling on his forelimbs. The remainder of the examination was unremarkable. Thoracic, cervical, and skull radiographs were taken. The skull radiographs indicated some bony lysis of the cranial mandible, consistent with his recent dental extractions. No other abnormalities were noted. The patient was given fluids (lactated Ringer’s solution at 2.8 mL/kg and a rate of 13 mL/hr) along with clindamycin (22.34 mg/kg IV).

The next day, Sam was transferred to the neurology service, where his examination indicated spastic tetraparesis, generalized ataxia, and decreased motor function of all limbs. His postural reactions, which help determine lesion location,4 were abnormal: +0 to 1 (absent to weak) in the thoracic limbs and +1 (weak) in the pelvic limbs. No cranial nerve deficits were noted. Spinal reflexes were normal. Palpation elicited no clear signs of spinal pain. Cranial nerve examination, used to evaluate various nerve pathways to the brain and help with lesion localization,4 revealed no deficits. Because Sam’s cranial nerve examination revealed no abnormalities and because his tetraparesis and abnormal postural reactions were more pronounced in the thoracic than in the pelvic limbs, the neuroanatomic disorder was determined to be localized to the cervical (C1 to C5) spinal cord segment.

Magnetic resonance imaging (MRI) of Sam’s brain and cranial cervical region was performed by using contrast (gadolinium at 100 mg/kg IV). He was premedicated with buprenorphine (0.4 mg/kg IV), and anesthesia was induced with midazolam (0.2 mg/kg IV) and propofol (4 mg/kg IV).

After induction, a fluid bolus (4.26 mg/kg IV) was given to remedy bradycardia (120 beats/min) and hypotension (76/57 mm Hg, mean 65 mm Hg, measured indirectly). Sam’s heart rate increased to 138 beats/min, but his blood pressure did not respond. Atropine (0.04 mg/kg IV) was then given, after which his blood pressure increased to 88/56 mm Hg (mean 68 mm Hg) and remained stable for 25 minutes. Anesthesia was maintained with isoflurane at 1.5 L/min and oxygen at 1 L/min. When heart rate and blood pressure again decreased, to 133 beats/minute and 65/44 mm Hg (mean 59 mm Hg), respectively, a second dose of atropine was given. Isoflurane was turned down to 1 L/min and 2 doses of hetastarch (hydroxyethyl starch) at 2.1 mL/kg IV were administered 5 minutes apart. Hetastarch causes an increase in plasma volume, which in turn increases and maintains appropriate blood pressure. Sam’s blood pressure increased and stayed in the mid-80s (mm Hg) for systolic and the mid-40s (mm Hg) for diastolic (approximate mean 65 mm Hg).

The MRIs showed hyperintense material in both tympanic bullae, more pronounced in the right but more expansive in the left (FIGURES 1–5). The atlanto-occipital (AO) joint showed increased fluid accumulation, which was causing extradural compression of the caudal brain stem and the spinal cord at C1, tapering over the C2 vertebra. The increased fluid and the stronger peripheral contrast enhancement of the AO joint were consistent with septic arthritis. Bilateral otitis media and interna were diagnosed and deemed the most likely source of the joint infection. 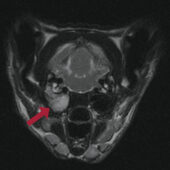 Figure 1. MRI axial T1-weighted scan, before contrast. Both tympanic bullae are filled with material, the right more than the left (arrow). 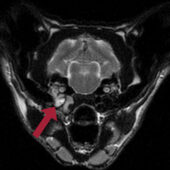 Figure 2. MRI axial T2-weighted scan, before contrast. Both tympanic bullae are filled with material, but the material in the right ear (arrow) can be better visualized. 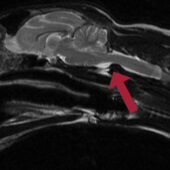 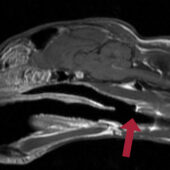 Figure 4. MRI sagittal T1-weighted scan, with contrast, showing increased contrast enhancement around the margins of the atlanto-occipital joint space, which can be seen protruding dorsally (arrow) and causing compression of the brain stem. 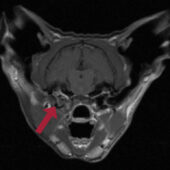 Figure 5. MRI axial T1-weighted scan, with contrast, showing the variable hyperintense material in the right middle ear (arrow), much more than in the left middle ear.

After the MRI, ultrasonography was performed to better visualize the AO joint. The joint was deemed accessible and was aspirated, with 2 to 3 mL of translucent fluid removed for cytology, culture, and sensitivity.

After the aspiration, bilateral myringotomy was performed. An otoscope was used to visualize the eardrum. A 12-mL syringe with a 22-gauge spinal needle attached was then gently guided through the eardrum into the internal ear canal, and 4 mL of saline was flushed into each bulla and aspirated back. The aspirated fluid was placed in a culturette. With the needle remaining in place, the syringe was switched out 4 times to flush out the debris and aspirate it back. With the eardrum pierced, any remaining trapped fluid could drain into the external ear canal.5 Myringotomies are performed to obtain specimens for cytology, culture, and antibiotic sensitivity; they can also immediately relieve pain caused by pressure associated with otitis media and interna.5

Sam was extubated and recovered with heat support. Lactated Ringer’s solution was restarted at 13 mL/hr. Cefazolin was given at 30 mg/kg IV q8h. Enrofloxacin (15 mg/kg IV), dexamethasone SP (0.15 mg/kg IV), and cefovecin (8.5 mg/kg SQ) were each given 1 time.

Sam’s vital signs returned to within normal limits, and his demeanor during the night was unremarkable. After much of the fluid in the AO joint had been aspirated, along with steroid treatment, his condition greatly improved within the next few hours. This improvement was presumed to be because the AO joint was no longer as swollen and no longer compressing the brain stem, thereby relieving his symptoms.

The cytology of the AO joint indicated that the aspirate was highly cellular, consisting of 97% neutrophils, 2% macrophages, and 1% small lymphocytes. No infectious organisms were seen and no growth occurred on culture, presumably the result of antibiotic treatment before hospitalization. The myringotomy aspirate was not sent out for culture because the treatment for the septic AO joint would also treat otitis media and interna.

By the day after surgery, Sam’s condition had improved markedly, and his medications were transitioned from intravenous to oral. He was given pradofloxacin (7.4 mg/kg PO q24h) and gabapentin (10.6 mg/kg PO q12h) to prevent nerve pain that may be associated with the infected AO joint.

Physical examination revealed a small amount of dried blood in the left ear canal and some serous ocular discharge. Neurologically, the patient was ambulatory with marginal ataxia. The rest of the examination was unremarkable. Sam was discharged home the next day. The gabapentin was continued for 1 week, pradofloxacin for 1 month, and cefovecin for 2 months (an injection every 2 weeks).

At the 6-week recheck, the client reported that Sam was doing well, eating and drinking normally, and back to “his old self.” Physical and neurologic examinations revealed no abnormalities, and no recurrence has been reported.

Sam’s infection most likely traveled from the middle ear to the AO joint via the vertebral artery, which runs anterior to the AO joint and enters the foramen magnum (FIGURE 6).5 However, other pathways could have been involved, including the carotid artery and jugular vein.4 Sam’s sympathetic nerves were not affected. His clinical signs were initially assumed to have resulted from a tooth abscess. It was not until Sam became tetraparetic that his diagnosis was investigated further. In retrospect, it was determined that his clinical signs were caused by the otitis. The brain stem compression also contributed to Sam’s clinical signs. This type of compression can lead to tetraparesis, generalized ataxia, abnormal postural reactions, weakness, dizziness, impaired vision, neck pain, weakness in the limbs, and proprioceptive deficits.6 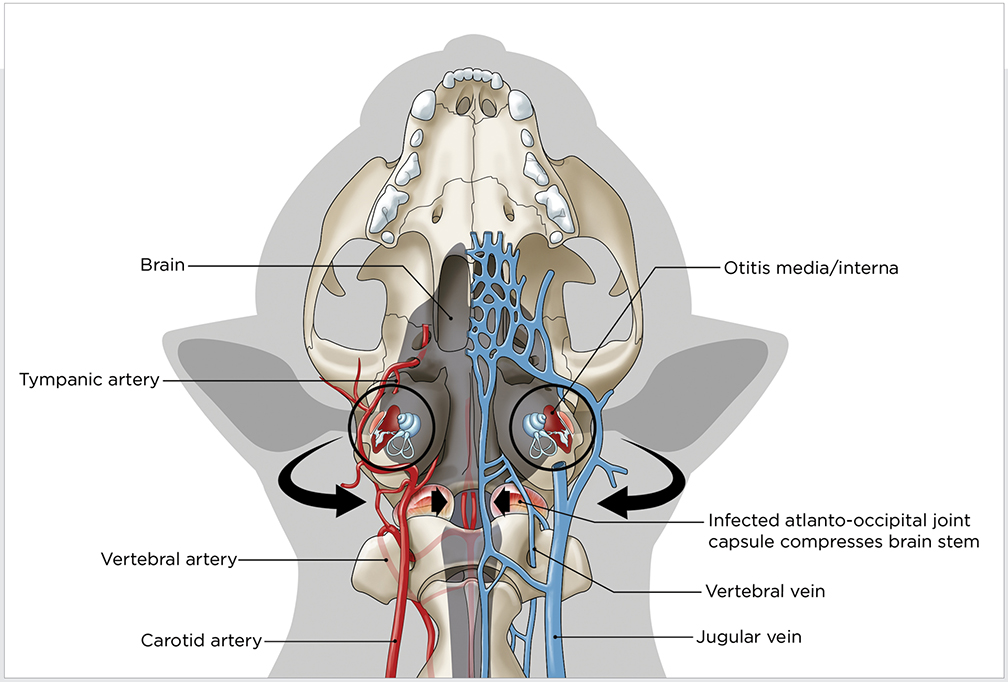 Figure 6. Potential route for infection travel from the middle ear to the atlanto-occipital joint via the vertebral artery. Illustration: Kip Carter

Otitis media and interna can be hard to diagnose without access to advanced imaging such as MRI or computed tomography. Therefore, it is important to take even subtle clinical signs seriously. If an outgoing cat suddenly starts to hide in abnormal places, becomes head shy, or exhibits a darker shade of red on its ears, these signs should be cause for concern. Had Sam’s otitis externa been found and treated sooner, the infection might not have progressed. However, as with Sam, some cats do not show many clinical signs until otitis externa progresses.