An ECG provides the veterinary healthcare team with the information necessary to calculate a patient’s heart rate and heart rhythm.

Edward is the senior cardiology veterinary technician at Southwest Florida Veterinary Specialists. He has worked in veterinary medicine since 1976. He is a charter member of the Academy of Internal Medicine for Veterinary Technicians and served on its executive board representing cardiology for 12 years. Previously, he spent 18 years at the University of Missouri in the cardiology service and 3.5 years at Ross University School of Veterinary Medicine in the anesthesia service. He presents internationally on veterinary cardiology topics. He has a passion for teaching, is the editor of Cardiology for Veterinary Technicians and Nurses, and has written over a dozen peer-reviewed articles.

Electrocardiography is the most useful diagnostic technique for characterizing cardiac rhythms; however, correlating what is recorded on the tracing with the electrical activity in the heart can be confusing. Veterinary nurses should have the skills needed to identify and characterize arrhythmias, which can be seen on electrocardiograms (ECGs) of patients being monitored during anesthesia, patients presented for various emergencies, and patients with known heart disease.

The waveforms produced during an ECG recording are reflective of specific portions of the heart’s electrical activity. The ECG provides information pertaining only to the electrical, not the mechanical, activity of the heart. An ECG will provide the information necessary to calculate heart rate (HR) and determine heart rhythm with the patient in any position. In the event of a suspected arrhythmia, a printed tracing simplifies interpretation.

This article presents tips for improving the accuracy of diagnosing arrhythmias and understanding when they require treatment. It begins with a brief overview of heart function, followed by a more detailed description of how that function is displayed on an ECG tracing.

The normal heartbeat begins with depolarization of specialized tissue called the sinoatrial node, located in the cranial right atrial wall (FIGURE 1). This impulse is propagated through the tissue of both atria in a wavelike pattern. The electrical activity of the atria is insulated from the ventricles by the fibrous cardiac skeleton, which forces all electrical activity to travel to the ventricles through the atrioventricular (AV) node near the intraventricular septum. After entering the AV node, the electrical impulse is conducted via specialized conduction cells through the bundle of His and then into the bundle branches, which divide into right and left bundle branches, each innervating its respective ventricle. After reaching the termination of the bundle branches, the impulse is transmitted through Purkinje fibers to the myocytes. Stimulated by the electrical impulse, the myocytes stimulate their neighboring cells and conduct the impulse, cell to cell, causing ventricular contraction.1 These events are represented on the ECG as the waveforms. Atrial repolarization is not visible on the ECG because it is obscured by the QRS complex. 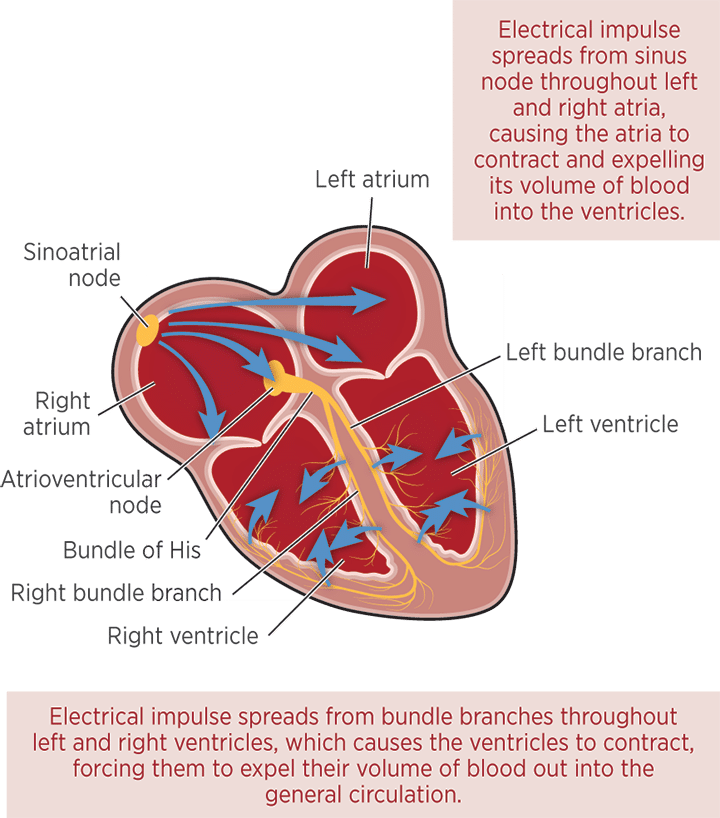 Heartbeats that originate in the sinoatrial node, which are normally propagated to the ventricles, are termed sinus beats. Sinus beats (or sinus rhythm) are considered normal and in lead II will appear on ECG as a positive P wave, slightly negative Q wave, strongly positive R wave, and slightly negative S wave. In veterinary patients, the T wave may be positive, negative, or diphasic (i.e., both negative and positive) (FIGURE 2). 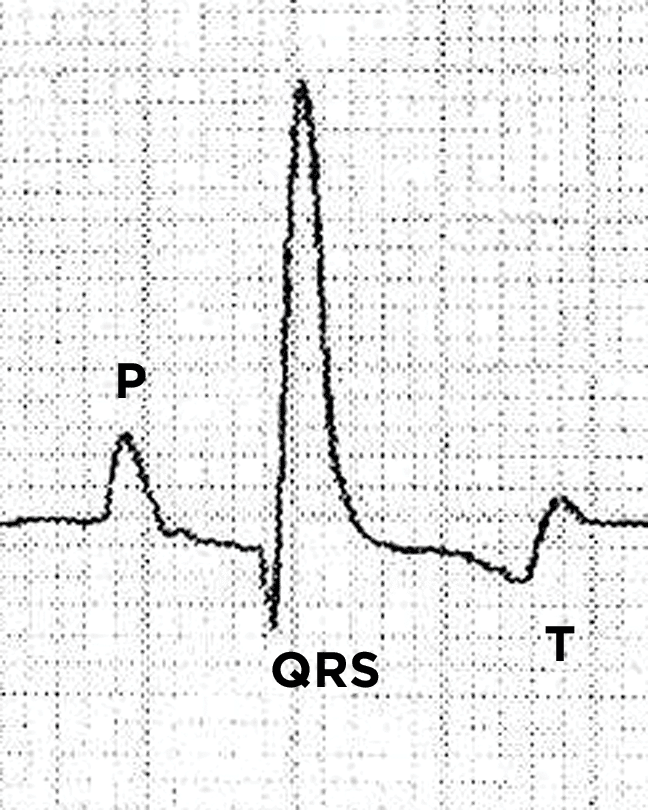 FIGURE 2. Electrocardiogram showing normal sinus rhythm in a dog. The P wave indicates atrial depolarization, the QRS complex indicates ventricular depolarization, and the T wave indicates ventricular repolarization. This tracing demonstrates a normal positive P wave, a negative Q wave, positive R wave, and no distinct S wave in this lead (which is considered a normal variation). The T wave of the dog may be positive, negative, or diphasic (both negative and positive) as seen here; these are all considered normal.

FIGURE 3. Heart rate (HR) calculations and premature complexes. Lead II, 25 mm/sec, 10 mm/mv. Line T demarcates 30 × 5–mm boxes (15 cm) or 6 seconds at this paper speed. To calculate HR, count the number of complexes within the line, which in this case is 11. Multiply 11 by 10 (60 seconds/minute divided by 6 seconds within the line = 10) to get an HR of 110 bpm. Line I represents calculation of an instantaneous HR. There are 8 1-mm boxes between the indicated QRS complexes. At 25 mm/sec, each box equals 40 milliseconds. Multiply 8 by 40 to arrive at 320 milliseconds between these 2 beats, then divide 60 000 by 320 to get an HR of 187 bpm. This calculation indicates that if this interval persisted, the HR would be 187 bpm. Arrow V points to a ventricular premature complex, and arrow A points to a supraventricular premature complex (commonly called an atrial premature complex).

Recording an ECG involves placing electrodes on the patient on opposite sides of the heart. The electrodes are connected to a computer designed to measure the electrical activity between them. Electrodes are polarized as positive or negative. As the electrical impulse moves through the heart toward a positive electrode, a positive deflection is traced on the ECG. The reverse is true if the impulse moves toward a negative electrode. An ECG lead is an angle created across the heart by the placement of the 2 electrodes; the tracing reflects direction and magnitude. The standard electrode arrangement creates 3 bipolar leads (TABLE 1). Electrocardiographic paper is graph paper. On the paper are bold lines indicating 5-mm boxes, within which are smaller grids of 1-mm boxes. When combined with paper movement speed and an electrical amplitude calibration, time and electrical voltage can be accurately calculated. The common paper speeds are 25 mm/sec and 50 mm/sec. The standard calibration is 10 mm/mv. For a complete multivariant analysis of the ECG, the patient must be in right lateral recumbency with other leads being recorded. Use of leads other than lead II is beyond the scope of this article. All changes to the ECG discussed in this article will be about lead II. Normal ECG values for waveform amplitudes, durations, and intervals are widely published.2-4

Before beginning any interpretation, first note what is termed CLAP (the amplitude Calibration, Lead displayed, any Artifact, and Paper speed). Then determine the HR. This step quickly identifies the presence of bradycardia or tachycardia. Because HR is a component of cardiac output, an abnormal HR can have a deleterious effect on cardiac output. Decreased cardiac output may be noted as hypotension in the patient. Monitors may display HR for the operator, but these values should be viewed with scrutiny because the HR algorithm may incorrectly calculate HR as a result of artifact, arrhythmias, or excessively large ECG waveforms. A manual HR count is more accurate.

The first step is determining the HR, as described above. The rate will immediately define the presence of a bradycardia or tachycardia, thus providing focus for all subsequent interpretations of the ECG.

By assessing most beats, the predominant rhythm can be determined. The most common rhythms of dogs are normal sinus rhythm and sinus arrhythmia, at a rate of 60 to 170 bpm.2-4 The most common rhythm of cats is sinus rhythm at a rate of 140 to 220 bpm.2-4 Sinus rhythm is a regular rhythm displayed on ECG as a P–QRS–T wave configuration. The P wave is positive with a predominantly positive QRS complex. Sinus arrhythmia is a normal rhythm of dogs but will be irregular in a repeating pattern. Most arrhythmias are sustained long enough to be a predominant rhythm. Atrial fibrillation (FIGURE 5) is an exception caused by chaotic depolarization of the atria, most often associated with heart disease. Atrial fibrillation is recognized by tachycardia, lack of P waves, a positive QRS complex, and an irregular R–R interval. A wildly jagged baseline may also be noted as the fibrillation waves are recorded. It is uncommon for atrial fibrillation to return to normal sinus rhythm.

3. Determine the Anatomic Source of the Rhythm

When the arrhythmia origin is supraventricular, the complexes are typically positive and narrow in lead II, shorter than 70 milliseconds.4 A positive, narrow QRS complex is created when atrial beats move down the normal conduction tissue to depolarize the ventricle.

When the arrhythmia originates in the ventricles, the complexes are wider than 80 milliseconds and show slurring of the Q–T segment; these complexes are commonly described as “wide and bizarre.” These beats do not use the normal cardiac conduction system. They propagate slowly across the ventricular myocardium, cell to cell, making the wide QRS complex.

4. Determine Whether All Waves Are Present

Every sinus beat will generate P–QRS–T waveforms. The complexes formed by premature atrial and ventricular beats will lack P waves because they are abnormally formed in the atrial or ventricular tissue. Wide complexes not associated with P waves should be considered ventricular in origin until proven otherwise. Ventricular bundle branch blocks are indicated by wide complexes (>80 milliseconds)5,6 with associated and consistent P waves. AV block will often appear as P waves with no accompanying QRS–T waveforms (FIGURE 6).

FIGURE 6. Atrioventricular (AV) block; leads II and III, 25 mm/sec, 10 mm/mv. This electrocardiogram tracing indicates both second and third degree AV block. The beginning of the tracing shows some normally conducted P waves creating a sinus beat (SB). The P–Q interval is fixed at 80 ms, making this a Mobitz II second degree AV block. The heart rate (HR) at the second-degree AV block in the beginning of the trace is approximately 57–60 bpm. P indicates blocked P waves. Had these P waves been conducted, HR would be approximately 185 bpm. Approximately halfway through the tracing, the AV block becomes third degree (complete AV block). Blocked P waves can be seen, still at a rate of around 185 bpm. Three ventricular escape (VE) beats occur at a rate of 33–37 bpm according to this short tracing. These complexes are wider than they are during sinus rhythm and show the characteristic S–T segment slurring of complexes of ventricular myocardial origin. An individual P wave can be seen “buried” within the T wave of the second VE beat.

A detailed description of arrhythmia therapy is beyond the scope of this article; however, some general information is warranted. The decision of whether an arrythmia warrants treatment depends on the hemodynamic consequences, the likelihood of an increase in severity, and the risks posed by medication.

A Look at Unusual Congenital Heart Defects in Dogs and Cats