Hematemesis, Abdominal Pain and Anemia in an Older Cat

Kimberly Harper, LVT received her AAS in veterinary technology from San Juan College in 2011. She began her career at VCA SouthPaws where she spent almost 6 years in the ICU. She is currently employed by Southern Maryland Veterinary Referral and Emergency Center in Waldorf, MD.

This case review discusses feline anemia in an older cat. It follows Sparky’s medical care from his initial presentation to our hospital (VCA Southern Maryland Veterinary Referral Center-VCA SMVCR located in Waldorf, MD) on March 2, 2017, through multiple admissions and discharges to both this hospital and a larger referral hospital (Dogs and Cats Veterinary Referral and ER located in Bowie, MD) ending on March 24, 2017. Some of the dates overlap because he was discharged from one hospital and admitted at another for further testing and treatment. The family’s last name has been omitted for privacy.

Sparky, a 12-year-old male neutered domestic short-haired cat, initially presented to VCA Southern Maryland on March 2, 2017, for hematemesis, lethargy, and inappetence. He was admitted to VCA SMVRC for observation and treatment. Nurses monitored his vital signs every 4 hours, along with medication changes related to his anemia and hydration status. His treatments included supportive care with IV fluids; buprenorphine for pain control; and gastrointestinal (GI) protectants, including maropitant, pantoprazole, and sucralfate. He was discharged the next afternoon with instructions to return in 7 days for recheck laboratory testing or sooner if needed. No further vomiting was noted.

Sparky had normally been a caution in the hospital but presented depressed with minimal reaction to staff handling. His vital signs were recorded as within normal limits: heart rate of 180 beats/min, respiration of 32 breaths/min, temperature of 101.8°F, pink gums, and capillary refill time (CRT) of 1 second. The only abnormality was a new II/VI heart murmur. He was 1 of 7 cats in the house, and all cats spend a large amount of time in the family’s recreational vehicle traveling up and down the East Coast. There was no known dietary indiscretion or toxin exposure. Sparky’s history included elevated platelet and white blood cell counts, according to his regular veterinarian in Virginia Beach, VA. These responded to cefovecin injections, but no further workup had been done. 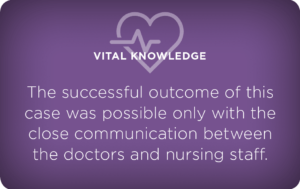 In-house laboratory testing showed anemia with a hematocrit of 22% (normal range, 30% to 45%) leukocytosis with a white blood cell count of 38,000 per mm3 (normal range, 3500 to 16,000 per mm3), and thrombocytosis with a platelet count of 1.1 million per mm3 (normal range, 200,000 to 500,000 per mm3), which was confirmed on a smear. No other abnormalities were seen on the blood smear. Full thoracic and abdominal radiographs showed normal cardiac and pulmonary structures, an enlarged liver, and fluid-filled small intestines. Laboratory specimens were sent out to Antech Diagnostics, which confirmed the in-house results and showed regenerative anemia with a reticulocyte count of 2.2% (normal range, 0% to 1%). No other morphologic abnormalities were seen.

Sparky returned to VCA SMVRC 3 days later, on March 5, for severe lethargy, dilated pupils, and ataxia when standing. He was tachycardic (heart rate, 240 beats/min) with a gallop rhythm, tachypneic, and obtunded; he had pale gums and no appreciable CRT. Focused assessment with sonography for trauma of the abdomen revealed no free fluid, and an in-house packed cell volume (PCV) showed a hematocrit of 13% (normal range, 30% to 45%) and total solids of 4.6 g/dL. Sparky immediately underwent blood typing and was found to be type A. Cross-matching was done to a unit of packed red blood cells (pRBCs), and he was transfused over 4 hours. Vital signs were closely monitored for any signs of reaction, furthering stages of disseminated intravascular coagulation (DIC), or worsening cardiovascular output. DIC was a concern because of his rapid decline over 2 days, the new gallop rhythm, and his mentation. The transfusion was minimally helpful — his packed cell volume increased to only 16% at 4 hours after transfusion. The next morning, Sparky’s family chose to transfer him to Dogs and Cats, specifically because of its internal medicine department.

Once at Dogs and Cats, Sparky underwent abdominal ultrasonography, which showed diffusely thickened intestines with disproportionate layers and scant effusion. The mesenteric lymph nodes were enlarged and irregular, suggesting intestinal lymphoma. Thus, a fine-needle aspirate was sent out for cytology. Sparky needed a second pRBC transfusion because his PCV dropped to 12% overnight. After the transfusion, it rebounded to 25% but then crashed to 18% 6 hours later. At that point, he needed a third transfusion of pRBCs. The cytologic results returned, showing reactive lymphoid hyperplasia due to an immunologic response to antigenic stimulation. Lymphoma was not confirmed. Sparky was later discharged with a working diagnosis of GI bacterial translocation; he was prescribed continued GI protectants, antibiotics, and prednisolone. 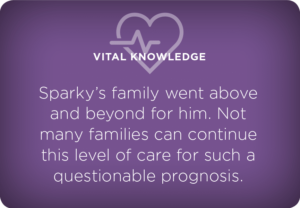 On presentation to Dogs and Cats, Sparky’s laboratory testing showed anemia with a hematocrit of 13%, a normal prothrombin time (15-23 seconds) with an off-the-scale high activated partial thromboplastin time (70-120 seconds), and leukocytosis with a white blood cell count of 49,900 per mm3. He received 50 mL of whole blood from an onsite donor; this was his fourth transfusion. The transfusion was completed without complications.

He proceeded to surgery for an upper GI scope and abdominal exploration. The scope was passed through the esophagus and stomach, which showed diffuse petechiations. The scope was then passed into the pyloric sphincter with some difficulty and then met resistance within the duodenum. The viewable tissue showed loss of mucosal detail, increased friability, and mild bleeding. The abdomen was then opened; a section of the jejunum was found to be discolored, friable, and perforated. This area was resected and the sample submitted for histopathology. Multiple small tan nodules were visible on the liver and were biopsied as well. Additional biopsy specimens of the local lymph nodes, liver, and duodenum were submitted, as was a secondary section of jejunum.

Sparky was proactively recovered in the oxygen cage after vomiting during extubation. Overnight, he was monitored closely for any signs of aspiration and continued on a fentanyl constant-rate infusion, antibiotics, vitamin K, and GI protectants. Early the next morning, Sparky’s PCV had dropped to 15% and his total solids had decreased to 6 g/dL. He received 1 unit of pRBCs and 1 unit of fresh frozen plasma. His PCV rebounded and remained at 22% for over 24 hours. He was discharged the afternoon of March 13 with amoxicillin/clavulanic acid, vitamin B12, prednisolone, omeprazole, and buprenorphine.

Sparky recovered at home for 24 hours before returning to VCA SMVRC for pain and nonspecific signs. In-house laboratory testing showed a PCV of 18% and total solids of 6 g/dL. Additional laboratory samples were sent to Antech Diagnostics; those results were reported the next day and showed a white blood cell count of 36,000 per mm3 and hematocrit of 17%; results confirmed regenerative anemia with a reticulocyte count of 2.9%. Sparky’s buprenorphine dosage was increased from q12h to q8h to alleviate his pain. Doxycycline and sucralfate were added per the internist at Dogs and Cats according to the new findings. A transfusion was not pursued at this point because surgery should have been curative for the active bleeding. Recheck laboratory testing was scheduled for 7 days.

Sparky presented to VCA SMVRC 2 additional times for recheck laboratory testing of complete blood count and PCVs. The visits on March 17 and March 24 showed an improving overall status with a decreasing white blood cells count and increasing hematocrit. His family stated that he was more like his old self at home, and in the hospital he showed the attitude he was known for. His sutures were removed 13 days after surgery, with minimal redness and bruising noted.

Sparky and his family returned to their home state of Virginia, where his regular veterinarian resumed his case. Sparky was expected to need lifelong attention because of the major insult his body endured.

In late June 2017, Sparky’s health took a turn for the worse and he received an additional 2 units of pRBCs over 2 days at his veterinarian’s office in Virginia. Although he seemed to recover initially from the latest hospitalization, he never fully regained his strength and ultimately passed away at home, surrounded by his family, on August 14.

Sparky was an interesting case for many reasons. He never had an absolute diagnosis of lymphoma, despite the testing and surgical procedures. The fine-needle aspirate and biopsy specimens yielded nondiagnostic results or just showed inflammation. The belief was that lymphoma was present, but not in a manner that was diagnosable.

Most of his care was handled locally by VCA SMVRC and Dogs and Cats, but his primary veterinarian in Virginia was updated regularly because the family would be returning there as soon as Sparky was cleared for travel. Full cooperation and access to records were paramount for Sparky’s continuity of care. The doctors at VCA SMVRC work only in an emergency department, so there was copious communication with Dogs and Cats regarding medications and updates on laboratory testing as the patient’s status was changing. The family stayed close to VCA SMVRC and preferred to use it for medicines and rechecks rather than drive an hour further to Dogs and Cats. The successful outcome of this case was possible only with the close communication between the doctors and nursing staff.

One aspect of the care provided to Sparky that was reviewed and updated after his hospitalization was how blood products were handled and transfusions administered. Various manufacturers were contacted to obtain recommendations on their respective pump calibrations for blood products. Two confirmed their pumps are contraindicated for blood products. Our standard operating procedures and new-hire training have since been updated to include this information.

Sparky’s family went above and beyond for him. Not many families can continue this level of care for such a questionable prognosis. After 12 years in veterinary medicine, 8 of which spent in an emergency setting, this is one case I will never forget.