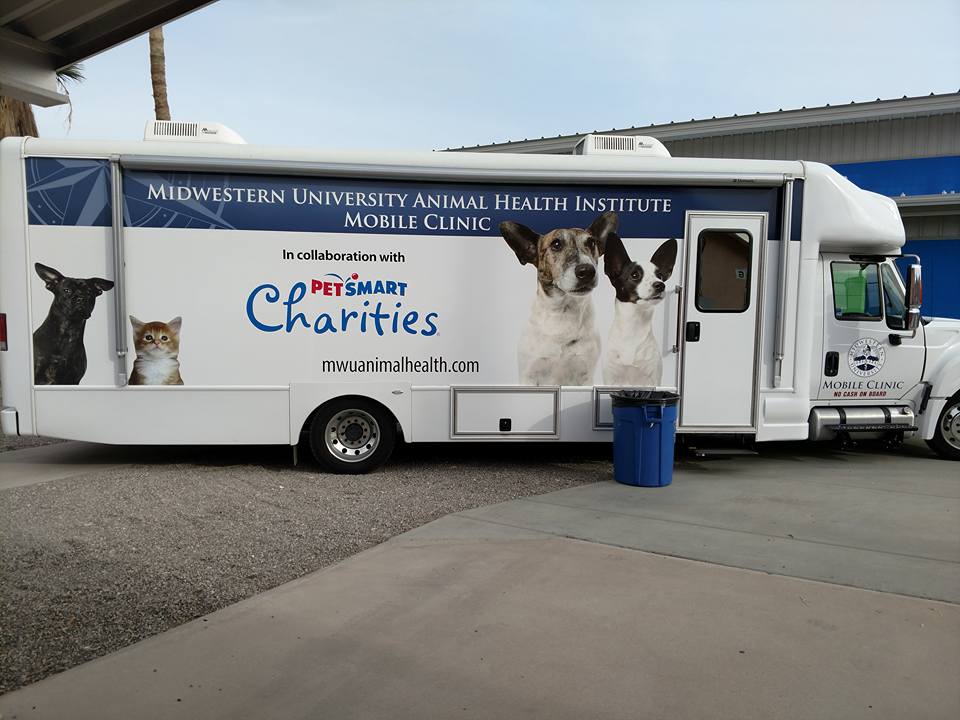 Midwestern University and We Care for Animals AZ are partnering in a trap-neuter-release program for feral cats.

Every community has them: feral cats. They are generally fearful of people and are highly unsociable, making veterinary care

extremely difficult. And the sheer number of feral cats in the U.S. makes the challenge even more daunting. Their population in the U.S. is estimated to be in the tens of millions, according to the American Society for the Prevention of Cruelty to Animals (ASPCA). Feral cats who end up in shelters make up a large percentage of cats euthanized in the U.S. every year.

Their work caught the attention of Rebecca Seefeld, president of We Care for Animals, Inc. “With limited resources in this area, I knew I had to reach out,” Seefeld said. “Spaying and neutering is extremely important to benefit and improve the life of animals in our community.”

Midwestern hopes to increase the exposure of the veterinary students to community outreach and trap-neuter-release, said Nellie Goetz, clinical assistant professor, shelter medicine, at Midwestern University. “This can impact public health, as unmanaged community cat colonies can pose health threats to the public. Cats in managed colonies, however, are typically as healthy as owned cats.”

So far, the trap-neuter-release (TNR) partnership has benefited nearly 800 cats in the Bullhead City, Arizona, community.

“We Care for Animals AZ measures the impact of the TNR program through monthly statistical reports from our organization, in combination with monthly shelter reports on their intake and euthanasia of feral cats,” says Seefeld. “What we know is feral cats that are surrendered to the shelter in almost all cases are euthanized the same day. Since the beginning of this collaboration, we have seen a reduction in the number of euthanized feral cats in the shelter.”

Community cats are not just feral cats that are born in the wild; many are cats that have been lost or abandoned by their owners. “Feral cats are probably the most misunderstood group of animals we serve as veterinarians,” says Goetz. “They are often thought of as wild and diseased, when, in reality, many of them may have been previously owned but were abandoned, and are generally in good health. People who are not proponents of TNR think that it is cruel to return the cats to the environments they came from, but in reality, TNR helps to make these cats healthier, and they are perfectly happy living in the environment they came from.”

The prognosis is poor for feral cats who do not get veterinary care. According to the ASPCA, “if a community cat survives kittenhood, his average lifespan is less than two years if living on his own. If a cat is lucky enough to be in a colony that has a caretaker, he may reach 10 years. Community cats who live in a managed colony—a colony with a dedicated caretaker who provides spay/neuter services, regular feedings and proper shelter—can live a quite content life.”

Trapping and euthanizing felines is a short-term solution that is not feasible, as studies have shown that it requires euthanasia of 50% of the feral cat population annually in order to decrease colony numbers, says Goetz. “Given these options, TNR is a much more humane way of controlling feral cat populations, especially when dealing with targeted communities like Bullhead City,” she says.

“We are also proactive when it comes to colony management,” says Seefeld, “keeping in constant contact with caregivers to help monitor whether any new cats (typically owned, abandoned cats) pop up in the managed colonies, as well as keep track of the general health of the colonies.”

TNR is controversial in the animal-health and protection community. People for the Ethical Treatment of Animals (PETA), for example, says that it’s not enough to trap, neuter and release feral cats. The cats must also be “isolated from roads, people, and animals who could harm them, are regularly attended to by people who not only feed them but also provide them with veterinary care, and are kept in areas where they do not have access to wildlife and the weather is temperate.” The ASPCA, on the other hand, endorses TNR as a humane and effective method to manage community cat colonies.

“TNR is a very polarizing subject in many communities, and voices on both sides need to be heard and invited to the table, so that misconceptions regarding TNR can be put to rest, and people can come together for a humane solution for these cats,” says Goetz.

As for the students, “it’s wonderful for them,” Goetz says. “They’re doing things that gets them a lot of experience but doesn’t minimize the level of care that the cats get.” Since October 2015, the mobile clinic has seen over 6,000 cases, over 4,000 of which are surgical and approximately 2,000 of which are vaccine, exam or minor medical. By the time students reach the end of their second year, more than 80% of each class has volunteered at the mobile clinic at least once.

Both women say the program succeeds because of the partnership. “It truly does take a village to be successful with TNR,” says Goetz.

Examining Racial Diversity in the Profession