A Foreign Body That Is “Sew” Unusual

FOREIGN BODY This case report describes the surgery performed on a Maltese that ingested a sewing needle, which then migrated through the oropharyngeal tissues into the spinal cord. Photo: Shutterstock.com/Alzbeta

Foreign bodies within the spinal cord are uncommon, but when they occur the prognosis is often grave. Spinal foreign bodies cause direct injury to neurons and disrupt neuronal function. Secondary complications can develop, including contaminant infection of the central nervous system and initiation of the inflammatory cascade, thereby exacerbating neuronal damage.1 Spinal foreign bodies typically result from major trauma (e.g., ballistic injury) or migration of foreign material such as a plant awn.2

This case report describes the extremely rare instance of a dog that ingested a sewing needle, which penetrated the pharyngeal soft tissue structures and ultimately the spinal cord at the atlanto-occipital junction. Fortunately, this case provided an excellent candidate for surgical exploration and removal of the invasive needle.

Leon was a 1.5-year-old, neutered, male Maltese dog with acute onset of tetraparesis and a lifelong history of dietary indiscretion. Leon had been given a treat by a family member and immediately began a short burst of gagging and retching; he then collapsed into lateral recumbency and was unable to stand. He was taken to a local veterinary neurologist, who determined that there was a lesion affecting the cervical spine. Orthogonal survey radiographs of the cervical spine revealed 2 thin metallic objects that appeared to be fragments of a broken sewing needle within the spinal canal at the atlanto-occipital junction (Figure 1). Leon had probably swallowed the needle some time before being given the treat, and then ingestion of the treat forced the needle dorsally into the atlanto-occipital junction. He was immediately referred for emergency surgical removal of the needle fragments. 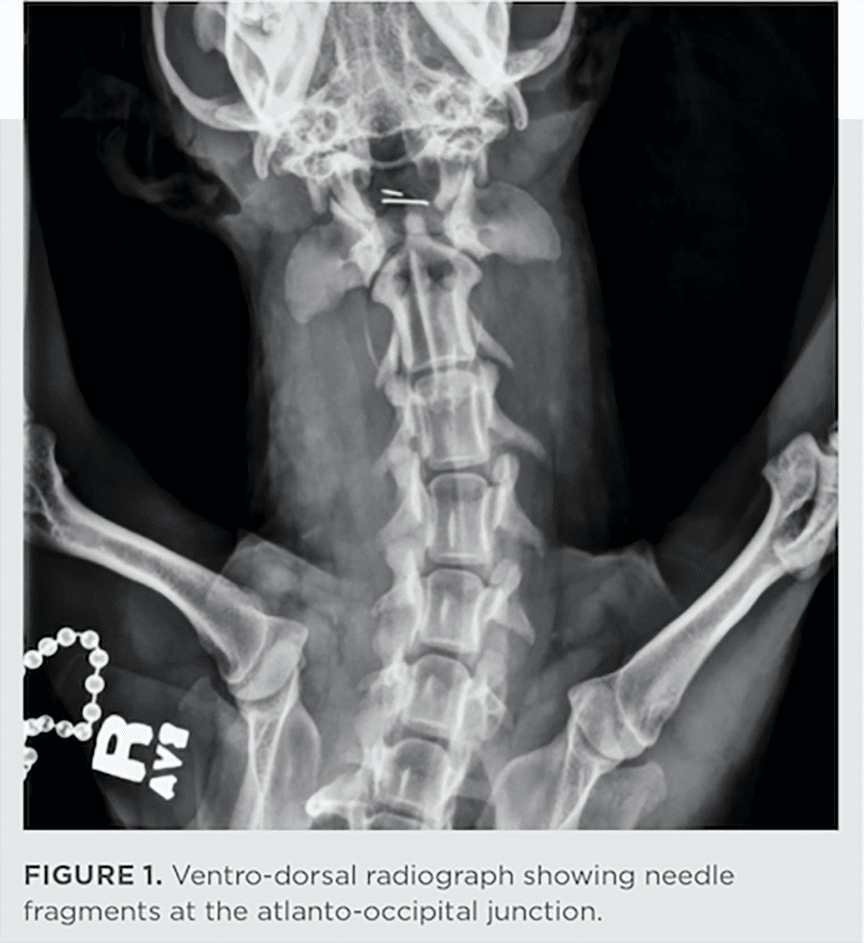 Leon weighed 3.9 kg and his vital signs were within normal limits. Neurologic examination revealed nonambulatory tetraparesis with strong motor function, abnormally increased muscle tone, and absence of conscious proprioception in all 4 limbs. His urinary bladder was firm and enlarged. Given the prior examination findings and radiographic diagnosis by the referring neurologist, further neurologic examination was not performed as a precaution to minimize manipulation of the patient. The tetraparesis combined with increased muscle tone of all limbs indicated a neuroanatomic localization at C1–C5, which fit with the radiographic confirmation of a penetrating foreign body at the atlanto-occipital junction. A foreign body in this area of the spinal cord is life-threatening because of the risk for additional parenchymal damage.3,4 Spinal cord injury in this location can lead to fatal respiratory compromise, inflammation can lead to secondary neuronal damage, and contamination from the oropharyngeal cavity can introduce infectious agents into the central nervous system.3,4 For Leon, because of the severity of neurologic signs and the risk for ongoing damage, surgical removal was the only option for survival.

Leon was anesthetized and positioned in sternal recumbency. Perioperatively, cefazolin was empirically administered at 22 mg/kg IV to provide bactericidal protection from potential infection introduced by the sewing needle. The fur over the dorsal cervical spine was shaved from 2 centimeters rostral to the external occipital protuberance caudally to the cranial edge of the scapula and a short distance on either side of midline. The surgical site was aseptically scrubbed with 4% chlorhexidine gluconate before and after the patient entered the operating suite. Sterile drapes were placed around the sterile field, and a dorsal midline incision was made from the occiput to the level of C2. As muscle bellies were elevated, Gelpi retractors maintained exposure to the area (Figure 2). For visualization of the C1 vertebra and occipital bone, the dorsal atlanto-occipital membrane was dissected. A partial dorsal laminectomy of C1 was performed to provide increased visualization of the spinal cord. Careful exploration was performed until both needle fragments, one with thread still attached, were located and gently removed from the dorsal aspect of the spinal cord cranial to C1 (Figure 3). The muscle layers were sutured in a simple continuous pattern with 3-0 polydioxanone suture; the skin was closed in an intradermal pattern with 3-0 monocryl. The pieces of sewing needle were submitted for aerobic culture (Figure 4). 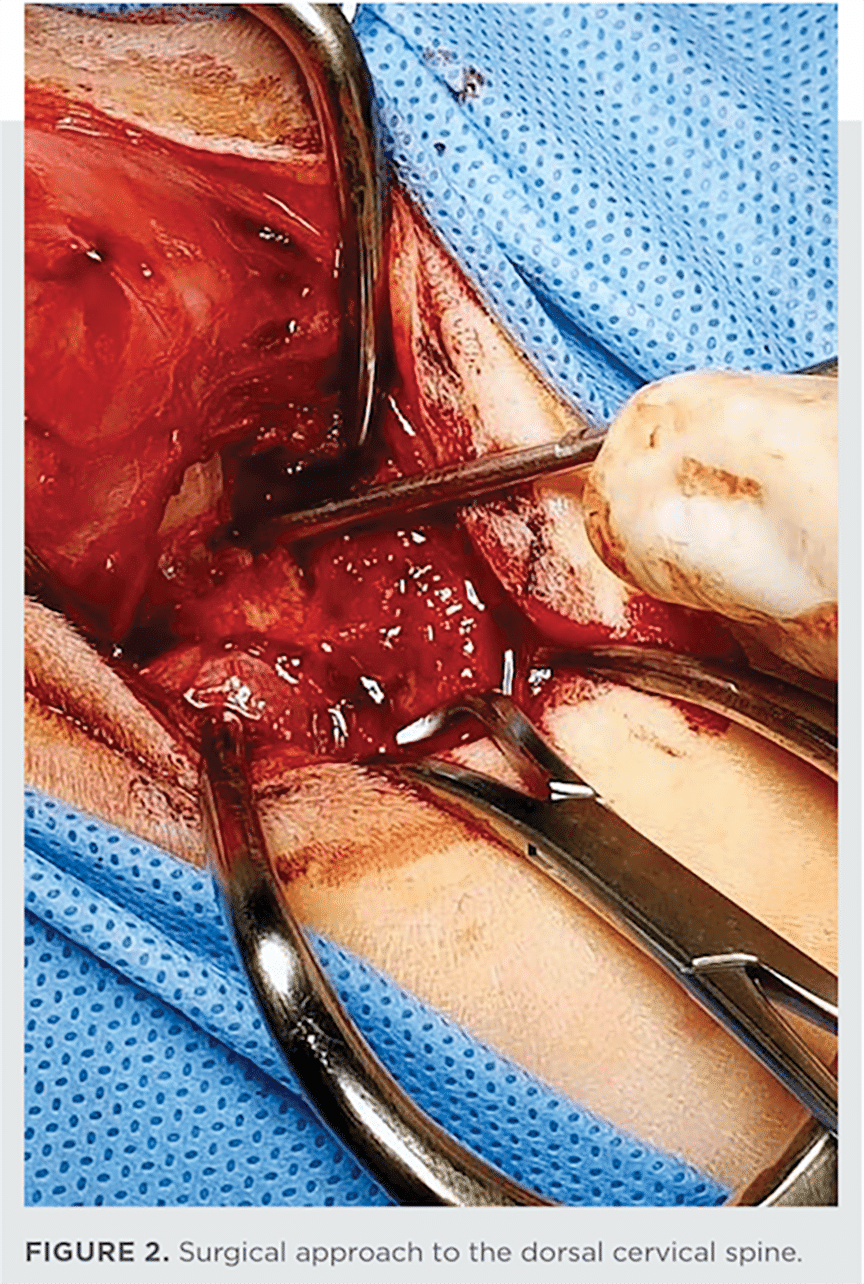 Because an injury to this location of the spinal cord can cause fatal respiratory compromise, our immediate postoperative concern was whether the patient could ventilate without assistance.5 End-tidal CO2 was monitored and maintained at 35 mm Hg, and oxygen saturation (measured through pulse oximetry) was 100%, indicating adequate spontaneous ventilation. Leon recovered from anesthesia routinely and without incident. 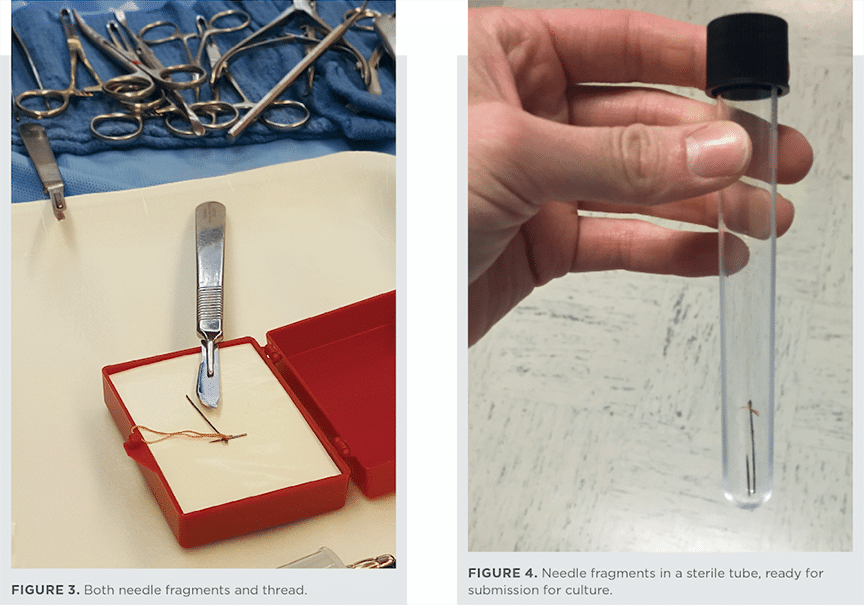 Leon recuperated in the intensive care unit and was supported with IV crystalloid fluids at a maintenance rate of 60 mL/kg q24h. To empirically treat for anaerobic, gram-positive, and gram-negative bacteria, we administered clindamycin IV at 10 mg/kg q12h and enrofloxacin IV at 10 mg/kg q24h. Both medications cross the blood-brain barrier, which for Leon was necessary because the sewing needle had penetrated the central nervous system. To control cervical pain associated with the initial injury as well as postoperative pain, the opioid fentanyl was administered at a constant infusion rate of 4 mcg/kg/h. For additional pain control, gabapentin at 10 mg/kg PO q8h and tramadol at 5 mg/kg PO q8h were administered. When muscle fasciculations were noted in the shoulders and neck, oral methocarbamol was initiated at 10 mg/kg q8h for muscle relaxation and additional patient comfort. Leon was monitored every hour for alertness as well as respiratory rate and effort. His vital signs were evaluated twice daily and remained within normal limits. His bladder was palpated every 8 hours and, if large, was expressed to relieve urinary retention and prevent detrusor atony. To reduce tissue swelling, the surgical incision was iced every 6 hours.

Two days after surgery, Leon’s neurologic function began to improve; he was able to take a few steps without support and posture to urinate voluntarily. All medications were switched to oral dosing and he was moved from the intensive care unit to the patient care wards. Physical rehabilitation was performed twice daily and included passive range-of-motion exercises to prevent joint contracture as well as standing and weight-shifting exercises to improve proprioception, strength, and minimize muscle atrophy.6

Four days after surgery, Leon was deemed stable, was improving neurologically, and was discharged with a fair-to-good prognosis for neurologic recovery. At the time of discharge, Leon could maintain a sternal position and take a few steps without support. At-home medications consisted of clindamycin, enrofloxacin, tramadol, gabapentin, and methocarbamol. The family was instructed on how to perform physical rehabilitation exercises, including passive range-of-motion and weight-shifting techniques, to improve Leon’s strength and function.

Bacterial culture of the needle fragments was positive for growth of Actinomyces odontolyticus and an alpha-hemolytic Streptococcus species, both of which were sensitive to the antibiotics already prescribed. It was recommended that the client continue the medications for the standard 2-week course and bring Leon back for neurologic evaluation. At the time of this report, no follow-up neurologic evaluation is available, but it is assumed that Leon fully recovered.

The prognosis for patients with spinal foreign bodies depends on the location of the foreign body, severity of the clinical signs, development of secondary complications (e.g., infection), and timeliness of treatment; however, prognosis is usually poor.1,2 For Leon, a combination of factors—including prompt diagnosis, surgical accessibility, and lack of secondary complications—aligned to produce a positive outcome.

The role of a credentialed veterinary nurse in a case like this can be demanding and multifaceted, including vigorous monitoring of anesthesia, performing circulating surgical duties during removal of the foreign body, and providing diligent postoperative care and monitoring throughout recovery. A skilled team of credentialed veterinary nurses is crucial for providing quality nursing care and improving the recovery process and ultimate outcome.

Supporting Emotional and Mental Health in the Veterinary Profession