Xylitol: A Sweetener That Is Not So Sweet

Carrie has been working as a certified veterinary technician at the ASPCA Animal Poison Control Center (APCC) since 2007. She obtained her associate’s degree in veterinary technology from Parkland College in 2003 and her bachelor’s degree in natural resources and environmental science from the University of Illinois in 2006. She worked for 2.5 years at a small animal clinic while in college and has assisted with several research projects in fish and wildlife ecology.

During her 10 years at the APCC, Carrie has gained a wealth of knowledge in the field of toxicology. She has been published in several peer-reviewed journals and is currently studying to become a board-certified toxicologist.

Xylitol is a sugar alcohol commonly found in sugar-free gums and mints, oral hygiene rinses, toothpaste, chewable supplements, nasal sprays, nicotine gum and lozenges, candy, chocolate, and peanut butter.1 It is also manufactured in granulated and powdered form to be used as a sugar substitute in baking. The ASPCA Animal Poison Control Center (APCC) received its first case involving xylitol in 2002.1,2 Over a 9-year period between 2002 and 2010, the ASPCA saw a significant increase in documented xylitol cases per year (FIGURE 1).1 This increase is likely related to pet owners and veterinary professionals becoming more knowledgeable about the dangers of xylitol, as well as increased use of xylitol in consumer products. For 2 consecutive years, 2011 and 2012, the total number of xylitol cases per year decreased compared with 2010.1 The reason for this decrease is unknown. In 2013, the number of xylitol cases surpassed the number seen in 2010, and incidents have steadily increased each year since, with the highest number of cases (4014) noted in 2015.1 Of those 4014 xylitol toxicity cases, more than 75% involved pets exposed to sugar-free gum.1 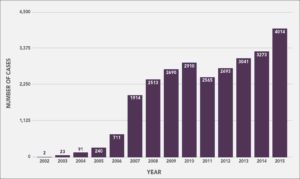 FIGURE 1. Number of xylitol cases per year reported by the ASPCA APCC from 2002 through 2015.

Xylitol causes significant insulin secretion in dogs, resulting in hypoglycemia.2–4 There is also evidence, both clinical and experimental, that xylitol can cause hepatic damage.3–5 The degree of xylitol toxicosis is dose dependent. Dogs are at risk for hypoglycemia at doses >100 mg/kg, while the risk for hepatic damage begins at doses >500 mg/kg.6 Serious signs are generally not anticipated with xylitol exposures at a dose <100 mg/kg1 (TABLE 1). Because xylitol toxicosis is dose dependent, the xylitol dose should be calculated when a suspected or known exposure has occurred. Although some products list the amount of xylitol on the package label, many companies consider this proprietary information, and the amount of xylitol may not be available to the consumer. Contacting the company directly or an animal poison control center may help in determining the amount of xylitol in certain agents.

Hypoglycemia has been reported within 30 to 60 minutes after ingestion2–6 but may be delayed up to 12 hours, depending on the agent involved.6 Clinical signs commonly seen with xylitol toxicosis include vomiting, weakness, ataxia, collapse, and seizures.1 Hypokalemia and hypophosphatemia may also be observed on blood chemistry panels as a result of hyperinsulinemia.2 Clinical signs related to hepatic injury may include lethargy, vomiting, and coagulopathy developing 9 to 72 hours after exposure.2,6 Elevated alanine aminotransferase (ALT), hyperbilirubinemia, prolonged prothrombin time (PT) and partial thromboplastin time (PTT), hyperphosphatemia, thrombocytopenia, hypoglycemia, and elevated alkaline phosphatase have been observed in pets that developed hepatic injury and necrosis.2 Liver enzyme elevation typically occurs within 8 to 24 hours.1 With liver-toxic doses of xylitol, some pets may not exhibit signs of hypoglycemia before developing liver failure.1,2

Treatment for xylitol toxicosis involves management of hypoglycemia and hepatic damage through supportive and symptomatic therapies. If an owner calls the clinic from home with a pet exhibiting signs of hypoglycemia, the owner should be instructed to rub honey, pancake syrup, or corn syrup on the gums and immediately bring the pet to the hospital. Patients that ingested >100 mg/kg of xylitol should be admitted to the clinic.2 Emesis is recommended within 4 to 6 hours after xylitol ingestion, but only if the pet is asymptomatic.4 Activated charcoal is generally not recommended. Studies have suggested that charcoal has a low affinity to bind xylitol.2

The patient’s phosphorus and potassium levels should be monitored,2 and supplementation should be considered if phosphorus is <1 mg/dL1 or potassium is <2.5 mEq/L.6 Baseline liver enzymes should be obtained on presentation and rechecked at 24, 48, and 72 hours.2

In patients that have ingested high doses of xylitol (>500 mg/kg), IV dextrose should be considered even if the pet has a normal blood glucose level on presentation.2 Liver protectants, such as S-adenosylmethionine, silymarin, or N-acetylcysteine, should be started prophylactically in these patients.2 With severe hepatic necrosis, coagulopathy may develop. Coagulopathies should be treated with plasma transfusions and vitamin K1.1

The prognosis for dogs exposed to xylitol is generally considered good when hypoglycemia is treated quickly and only mild elevation in liver enzymes occurs (BOX 1).2 In patients that develop severe hepatic injury and coagulopathy, prognosis is guarded or poor.2

A 4-year-old, 65-lb Siberian husky ingested an unknown amount of xylitol powder. The pet was found at home recumbent and twitching. On presentation to the clinic, the dog was hypoglycemic (blood glucose, 30 mg/dL; normal range, 74–143 mg/dL). The animal was also hypophosphatemic (serum phosphorus, 0.9 mg/dL; normal range, 2.5–6.8 mg/dL) and hypokalemic (serum potassium, 2.9 mmol/L; normal range, 3.5–5.8 mmol/L). ALT was mildly elevated (147 U/L; normal range, 10–125 U/L). The pet was started on IV fluids and given a bolus of dextrose (25% dextrose 10 mL IV slowly); dextrose was then administered as a CRI (normal saline with 2.5% dextrose at 120 mL/h IV). Liver protectants, including S-adenosylmethionine and N-acetylcysteine, were started. N-acetylcysteine was given as a loading dose of 140 mg/kg slowly IV and repeated every 6 hours at 70 mg/kg. Activated charcoal was not administered. Liver enzymes were rechecked 12 hours after presentation. ALT had increased to 450 U/L. The animal was doing well clinically at this time.

Twenty-four hours after the dog presented to the clinic, ALT was at 452 U/L, IV dextrose had been discontinued, and blood glucose was normal. The pet was eating and drinking on its own. Liver protectants were continued. No further increase in ALT occurred, and the dog did not develop coagulopathy associated with acute hepatic failure. Liver values were last rechecked by the dog’s referring veterinarian 10 days after ingestion, and the ALT was still mildly elevated at 124 U/L. This mild elevation may be idiosyncratic for this patient.

Role of the Technician

Veterinary technicians have many responsibilities in cases when there has been a suspected or confirmed exposure to xylitol. Pets admitted to the clinic for xylitol toxicosis will likely be hospitalized for a minimum of 12 hours and sometimes longer than 72 hours, depending on the degree of toxicity. Technicians are usually responsible for obtaining a thorough history surrounding the exposure. It is important to obtain the full product name, including flavors when applicable, and collect any packaging the owner may have. This information will be very important if an animal poison control center is contacted. The time of exposure, clinical signs observed at home, and treatments implemented at home should also be recorded, along with a worst-case scenario amount of the agent ingested. While the patient is in hospital, the technician typically collects blood samples and conducts lab work, administers IV fluids and medications, and monitors clinical status for signs of hypoglycemia.

Oral Decontamination in Dogs and Cats