Dog parks aren't all fun and games. There can be many risks to both dogs and owners, including zoonotic parasites and multidrug-resistant hookworms.

Jordan graduated from the Veterinary Technician Institute at Bradford School in Columbus, Ohio, in 2008 with an associate degree in veterinary technology. She then moved to South Carolina, passed the VTNE, and became licensed. She worked in general practice before becoming licensed in Georgia in 2015 and moving to a specialty practice. In 2019, she obtained her VTS certification. Jordan has a love for hematologic disorders and specialty veterinary nursing care. In her spare time, she is active in outdoor activities with her husband and 2 children. Her house is even more chaotic with 5 dogs added to the mix.

When taking a dog to the dog park, there can be risks to the pet—such as injuries, fighting, or even overexertion, which may potentially lead to heatstroke. However, another risk often gets overlooked: the risk for intestinal parasite exposure. This is a greater threat than some owners might imagine. Dog parks, typically, do not require a health screening, especially fecal screens, prior to dogs being allowed to enter. This practice allows infected dogs to spread infectious parasites to parasite-free pets.

Researchers have found that 80% to 90% of dog parks studied across the U.S. had parasites found in stool samples, with the South having the highest rates of infection.1,2 There has also been a recent rise in resistant hookworm exposure, particularly from dog parks.1-5 With the potential for zoonotic exposure, both humans and dogs are at risk for infection from Ancylostoma caninum, as well as other intestinal parasites.3

The Pests and Parasites series is brought to you by Merck Animal Health, the makers of Bravecto® (fluralaner) and Sentinel® (milbemycin oxime/lufenuron).

According to the Centers for Disease Control and Prevention (CDC), “A parasite is an organism that lives on or in a host organism and gets its food from or at the expense of the host.”6 The most common intestinal parasites that are found in dog parks include Giardia, whipworms, and hookworms, with lower infection rates of roundworms and tapeworms.2,6 The southern United States has been shown to have the highest rate of hookworm infections.2,6 However, there does tend to be lower parasite prevalence in dogs that are consistently kept on heartworm/intestinal parasite preventives.2

Giardia can survive in cold and wet conditions for up to several months.7 Due to this ability, Giardia is often found in dog parks that contain sprinklers, splash pads, or wading pools (FIGURE 1). Once ingested, the trophozoites mature within the gastrointestinal tract, causing clinical signs including diarrhea (sometimes steatorrhea), occasional hematochezia and/or excess mucus in feces, weight loss, and vomiting.7 The most common medications used to treat Giardia include metronidazole and fenbendazole.

Whipworms (Trichuris vulpis) infect the colon and cecum of pets. Eggs can generally remain dormant in the environment for several years unless they dry out, making them unable to infect pets. Pets may also carry a whipworm burden without shedding eggs, as it can take a female whipworm up to 12 weeks to begin shedding eggs into the feces (FIGURE 2).8 Some clinical signs that may be noted with whipworm infections include, but are not limited to, weight loss, diarrhea, and sometimes hematochezia.8 This long incubation period results in frequent false-negatives; therefore, diagnosing a whipworm infection requires testing multiple stool samples. Treatment of whipworms with fenbendazole is recommended to span over 3 months.8 Monthly heartworm disease preventives and intestinal parasite control medications that are effective against whipworms should be administered concurrently. 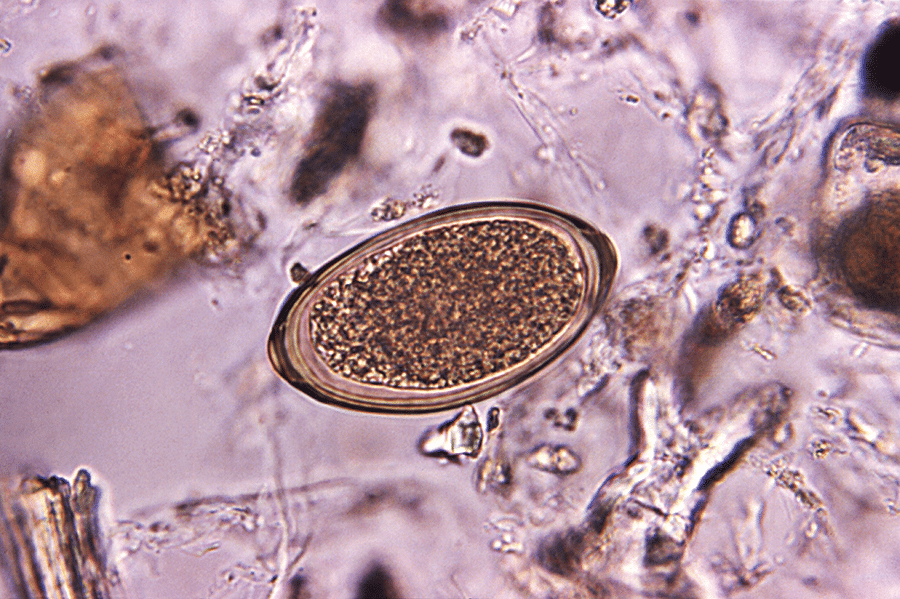 There are several different types of hookworms, depending on the location of the pet. A caninum tends to be found in tropical and subtropical areas, such as the southern United States. Ancylostoma braziliense is generally found from Florida to North Carolina and along the Gulf Coast. Uncinaria stenocephala is generally found in the cooler regions such as Canada and the northern United States. All variations of hookworm larvae can remain in the soil or environment for several months or longer under optimal conditions, such as moist and warm soils, and for 5 to 6 weeks under normal conditions, such as warm, dry soil.8

Hookworm infections can occur orally, transdermally, through the placenta before birth, or even through the dam’s milk. Once they’ve infected a host, hookworms use their hook-like mouthparts to attach themselves to the lining of the intestinal wall. There, they ingest large amounts of blood from tiny blood vessels. It can take 2 to 3 weeks for larvae to mature, mate, and produce eggs inside the host (FIGURE 3).8,9 Female hookworms can produce hundreds of eggs that are then shed in the stool of infected dogs, and this contaminates the environment. When hookworm larvae burrow into the skin, they migrate to the lungs or trachea. Then the larvae are coughed up and swallowed, ending up in the intestinal tract, where the cycle begins again. Hookworms may also migrate through muscle or organs and become dormant (encysted). 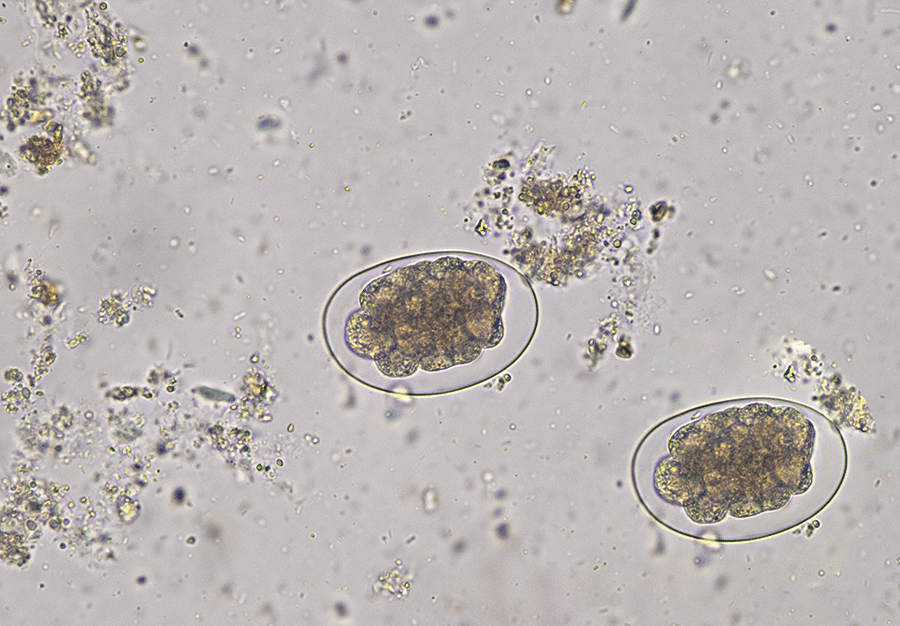 Hookworm infections, not limited to resistant infections, have the ability to cause clinical signs such as gastrointestinal distress and anemia caused by blood loss. Some dogs may have weight loss, dull hair coat, bloody diarrhea, and possibly even coughing with severe infections. Skin irritation and itching may also be noted with migrating larvae if the pet became infected by a largely infested environment, typically through the paws.8

A Look at Resistant Hookworm Infections

Recently, there has been a rise in resistant hookworm infections, or A caninum with multianthelmintic drug resistance.1,3,5 What classifies these infections as multidrug resistant? These are hookworm infections that are resistant to 2 or more drug classes of U.S. Food and Drug Administration (FDA)-approved medications.1 The drug classes that we are seeing resistance to include macrocyclic lactones and benzimidazoles, as well as tetrahydropyrimidines.1 Currently in the United States, the anthelmintic medications approved by the FDA include pyrantel pamoate, moxidectin, and fenbendazole.1,5 As these medications are used to kill the susceptible hookworms, the resistant parasites continue to populate the intestines of infected dogs and shed hookworm eggs within the environment, spreading the resistant parasites to more pets. It has been reported that some patients are no longer responding to moxidectin as a second-line treatment after pyrantel and fenbendazole were tried, with A caninum being the most common resistant hookworm species.1,5

So, where are these types of infections coming from, and how are they making their way to dog parks? It is likely that the resistance came from retired racing greyhounds and the misuse of anthelmintics in these dogs while they were racing on the tracks.1,3,5 These greyhounds often retired from less-than-ideal conditions that included improper treatment of their intestinal parasitic burdens using inappropriate dosing or nonprescription anthelmintics.4 It is common for anthelmintic drugs that are approved for administration to livestock to be used in domesticated dogs. In addition, one theory concluded that there may be a difference in metabolism of anthelmintics in greyhounds as compared to dogs of other breeds.4

With forced closure of many racetracks by state governments in the past 5 years, these retired greyhounds were placed in rescues and adopted as pets.4 This led to more greyhounds that were unknowingly carrying a resistant parasite to more frequented places, including dog parks. Management of parasite infections involve a protocol to treat the intestinal burden and diminish the risk of resistance. However, this type of hookworm infection is different, and today these resistant infections are no longer affecting just greyhounds but other breeds as well. When dogs visiting places like dog parks come in contact with hookworm-infected feces, the resistant parasites spread.

In September 2021, the American Association of Veterinary Parasitologists developed a national hookworm task force to further investigate the multianthelmintic drug–resistant A caninum.3 How do we identify a resistant hookworm infection? Unfortunately, there is not a direct test to identify resistant hookworms; however, the task force has recommended performing centrifugation fecal examinations 12 to 14 days after treating a dog with a hookworm infection to identify additional live hookworms after treatment.1 It is also recommended to use fecal egg count reduction tests to determine if the treatment is aiding pets.1,3 The failure of treatment should be reported to the manufacturer of the anthelmintic or to the FDA at fda.gov/reportanimalae.

Some researchers have found that emodepside, which is an anthelmintic approved for use in Europe, may have some efficacy toward resistant hookworm infections, although it is not approved for this use in the United States.4 There are also risks associated with this drug being used in patients that are coinfected with hookworms and heartworm microfilariae.4 This is because emodepside can cause sudden death of the microfilariae, which can trigger an anaphylactic reaction in patients. A topical solution of emodepside with praziquantel is approved for use in cats by the FDA; however, this product is ineffective in dogs.4

As veterinary nurses, we should inform pet owners of the risks of intestinal parasites and the possibility of infection to their dogs, as well as themselves. This includes not just the risk for resistant hookworm infections but infection of other parasites as well, such as Giardia and whipworms. This risk is higher if pets venture to places such as dog parks and boarding facilities, where these parasite burdens can be shed and spread to other pets and possibly to their owners.

It is important to urge pet owners to give heartworm disease prevention to not only prevent heartworm disease but also reduce the risk of intestinal parasitic burdens as well. Monitoring patients through fecal examinations can inform pet owners if their pets are carrying parasitic burdens prior to going to dog parks or other facilities. Ideally, a patient would be treated for an infection and be retested 12 to 14 days later to assess fecal egg counts, along with fecal centrifugation testing, with repeat treatment as needed.3,4 In addition, reporting possible resistance to the proper organizations, such as the FDA, can lead to better studies of anthelmintic efficacy needed to ensure that these parasitic burdens are removed from the general canine population.

As long as pet owners are not cleaning up after their pets, the risk of spreading intestinal parasite burdens is great. This not only affects pets around the U.S. but has the potential to pose a threat to humans as well. Client education of proper handling and cleaning of shedding feces is important to protect themselves as well as others. It is also important for pet owners to recognize the signs of possible parasite burdens so that they seek early treatment for their dogs. Multidrug-resistant hookworms as well as other parasitic burdens are a growing threat across the United States, and we must do what we can to prevent future outbreaks.