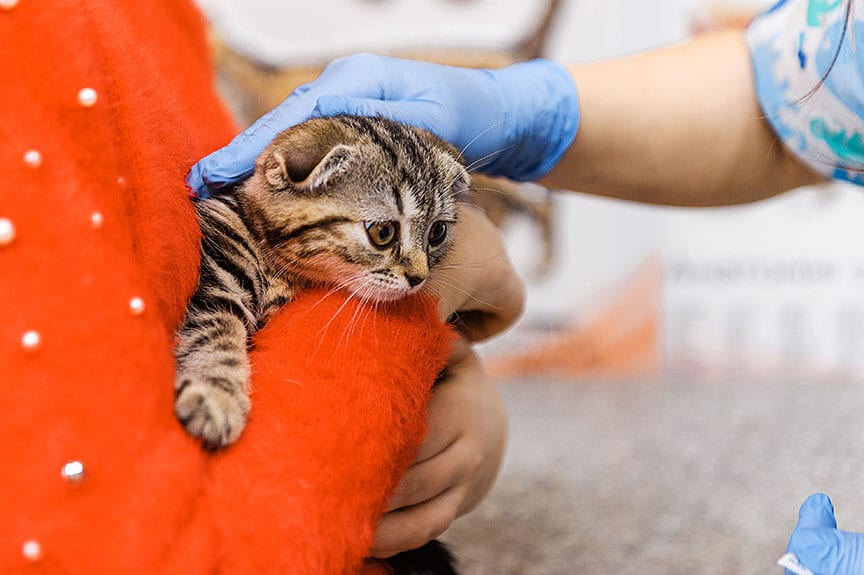 Treatment of a shelter cat infected with feline panleukopenia is the same as that in a private practice setting, including anti-emetics, broad spectrum antibiotics to control secondary infections, fluid therapy and blood product transfusion as needed. Foster and rescue homes can be used for quarantine of exposed animals, but if facilities or staff are insufficient and off-site options are not possible, euthanasia of infected animals may ultimately save lives by preventing continued spread, according to UC Davis. Photo: Shutterstock.com/flywish

Two cases of the rare, often fatal feline panleukopenia virus forced the Athens-Clarke County Animal Shelter in Athens, Georgia, to quarantine all feline residents and turn away any new shelter occupants for nearly two weeks in July. In response to the outbreak, the shelter euthanized 26 cats, according to ACC Animal Control Administrator Michelle Carrigg.

“This disease is essentially kitty parvovirus and is very contagious in unvaccinated young cats,” says Audrey Cook, BVM&S, MRCVS DACVIM, DECVIM, DABVP (Feline Practice), associate professor at Texas A&M University’s Veterinary Medical Teaching Hospital. “I don’t know if the cats that were euthanized had been exposed and were unvaccinated, but if that was the case, I can understand the decision to euthanize.”

Carrigg says the two confirmed cases involved kittens that were siblings. “One of our kittens was very sick and had to be euthanized,” she told the NAVC. “When one of the kitten’s sibling also got sick, we tested for the virus and discovered it was infected.”

Independent of the shelter’s confirmation of the virus, the shelter director of the Athens-Area Humane Society, Jed Kaylor, “pulled a kitten he knew to be sick from our shelter that staff was going to euthanized for health reasons,” Carrigg says. “I was informed at a later time by one of my staff that Mr. Kaylor stated his vet tested the kitten and it was positive for feline panleukopenia.”

During the two-week quarantine, only shelter staff had access to the cat area of the shelter and the rooms underwent deep cleaning.

The deep cleaning is a multistep process. “Feline panleukopenia is a parvovirus, which is relatively environmentally hardy and resistant to many disinfectants,” says Brandy A. Burgess, DVM, MCs, PhD, DACVIM, DACVPM, assistant professor of epidemiology and infection control at the University of Georgia College of Veterinary medicine.

“Cleaning and disinfection includes removal of visible debris, scrubbing with a detergent, rinsing, allow to dry, then application of a disinfectant,” says Burgess. “[The virus] is susceptible to sodium hypochlorite, formaldehydes, glutaraldehydes, and reportedly to newer generation peroxygens. This virus is shed in bodily fluids and is transmitted via contact — either directly or indirectly through environmental contamination. The challenge here is the potential for widespread environmental contamination and having ‘cleanable’ surfaces – any porous surface we cannot truly clean and disinfect. When a facility is managing an outbreak, they will typically remove animals and clean all surfaces including equipment.”

Once Common, FPLV Is Now Rare

FPLV “infects and kills cells that are rapidly growing and dividing, such as those in bone marrow, intestines and the developing fetus,” says the American Veterinary Medical Association (AVMA). In the past, feline panleukopenia — aka feline distemper or feline parvo — was a leading cause of death in cats, reports the AVMA, but today, it is far less common, due in large part to the availability and use of very effective vaccines.

Spikes in the virus occur during the warmer months when cats are more likely to come in contact with other cats, and outbreaks are common in shelters, pet stores, and other places where cats are housed together. “Ideally, unvaccinated cats should not be allowed into an area where an infected cat has been, even if the area has been disinfected,” recommends the AVMA.

Treatment of Cats Infected With FPLV

Treatment of a cat infected with feline panleukopenia is the same as that in a private practice setting, including anti-emetics, broad spectrum antibiotics to control secondary infections, fluid therapy and blood product transfusion as needed.

The likelihood of recovery from FPLV for infected kittens less than 8 weeks old is poor, says the AVMA. “Since there are no medications capable of killing the virus, intensive care and treatment are critical to support the cat’s health with medications and fluids until its own body and immune system can fight off the virus,” the AVMA notes on its website. “Without such supportive care, up to 90% of cats with FP may die.”

The Challenge for Shelters

According to the website of the UC Davis Koret Shelter Medicine Program, feline panleukopenia is transmitted primarily by the fecal-oral route, including through exposure to objects, clothing and hands contaminated with virus from feces. FPLV is extraordinarily durable and can persist in the environment for months or even years.

Animal shelters can find their resources stretched thin when treating FPLV-infected animals. According to UC Davis, treatment should only be undertaken in a shelter when it’s possible to isolate the patients so that the rest of the population is not put at risk. Staff and veterinary oversight must be adequate to ensure humane and appropriate care.

While foster and rescue homes can be used for quarantine of exposed cats, if facilities or staff are insufficient and off-site options are not possible, euthanasia of infected animals may ultimately save lives by preventing continued spread of the virus, says UC Davis.

In 2018, Nassau County (Jacksonville, Florida) Animal Services had to euthanize 127 cats as the result of an outbreak of feline panleukopenia. According to a WJCT story, a kitten first caught the virus and had to be euthanized because of the severity of the illness.

According to Nassau County Animal Services, the shelter tried additional rounds of quarantines, but the virus kept turning up in other cats.

“This was horrible and we hated doing it,” Timothy Maguire, director of Animal Services, said at the time. “We did everything we are capable of to avoid this outcome.”

After the cats were euthanized, the cat shelter was closed for two weeks for an extensive sanitization.

“We regret to inform the community that the shelter had a confirmed outbreak of panleukopenia that devastated our cat population,” the shelter reported on its Facebook page. “To prevent undue suffering, the shelter leadership took drastic measures to ensure the problem was eradicated and that no cats would suffer.”

“It can be difficult to remove all virus particles from the environment, so vaccination of any incoming animals is recommended when the facility is repopulated,” says UGA’s Burgess.

In July 2019, the Athens-Clarke County Animal Shelter staff had to make the same heartbreaking decision. After a deep cleaning, the shelter reopened its doors to cats on July 20.

Keep up with news involving the veterinary community and companion animals on Today’s Veterinary Nurse’s News section of its website.

Canine Anxiety and How to Deal With It