Addisonian Crisis in a Dog

This case report describes a “textbook” addisonian crisis in a dog with regard to clinical presentation, laboratory values, and signalment.

Becky is an emergency and critical care veterinary nurse at Purdue University Veterinary Hospital. She earned a BA degree in French from the University of California, Santa Barbara, in 2011, earned an AAS degree in veterinary technology from Madison College in 2015, and is working on a MVSc degree in biomedical science at the University of Missouri. Becky achieved her veterinary technician specialty (VTS) in emergency and critical care in 2020. Her areas of special interest include emergency stabilization of internal medicine disorders, teaching medical math, and cardiopulmonary resuscitation preparedness. Becky loves her small dog (Struedel), her kitten (Apple Jack), The Lord of the Rings, and Britney Spears!

This case report describes the signalment, diagnosis, and treatment of a 5-year-old dog experiencing an addisonian crisis. The purpose of this article is to outline the approach of the veterinary healthcare team in identifying and addressing a typical presentation of this medical emergency. Key takeaways include tips for identifying key clinical signs of Addison’s disease and a review of the recommended emergency and long-term treatment.

Hypoadrenocorticism, also called Addison’s disease, is an underproduction of glucocorticoids and mineralocorticoids by the adrenal glands. It is sometimes referred to as the “great pretender” because clinical signs are often nonspecific and can mimic those of other diseases. For patients exhibiting nonspecific clinical signs such as anorexia, lethargy, vomiting, and diarrhea, hypoadrenocorticism should be on the differential diagnosis list until proven otherwise. If the condition becomes serious (sudden weakness, severe vomiting and diarrhea, and sometimes collapse), it is called an addisonian crisis and is considered a medical emergency. Long-term prognosis for patients with hypoadrenocorticism is excellent with proper treatment; however, because damage to the adrenal glands is irreversible, treatment must continue throughout the patient’s lifetime. Pets predisposed to hypoadrenocorticism include middle-aged, female, mixed-breed dogs.1 Hypoadrenocorticism is rare in cats but has been documented.2 This article describes an addisonian crisis in a dog; the case was considered “textbook” with regard to clinical presentation, laboratory values, and signalment.

Josie, a 5-year-old, spayed female Chihuahua mix was brought to our hospital due to anorexia, lethargy, polydipsia, shaking, and vomiting. She seemed depressed and weak. Physical examination revealed bradycardia at 40 beats per minute (reference range, 70 to 120 bpm), mild hypothermia at 99.5 °F (reference range, 99.5 °F to 102.5 °F), and tacky mucous membranes indicating 5% dehydration. All other parameters were within normal limits.

An electrocardiogram, obtained due to the bradycardia, revealed atrial standstill, which can result from hyperkalemia. Atrial standstill is a transient bradyarrhythmia characterized by lack of atrial depolarization (FIGURE 1). Hyperkalemia decreases cardiac resting membrane potential, thus increasing cardiac excitability. Typically, atrial standstill is not observed until potassium concentration exceeds 8.5 mEq/L;5 however, as Josie’s case demonstrates, it can occur at lower concentrations.

For cardioprotective effect, calcium gluconate (10%) was administered slowly at 1 mL/kg IV while the electrocardiogram was monitored. Calcium gluconate does not affect potassium levels but instead antagonizes potassium’s effect on cardiomyocytes.6 Treatment should be slowed or stopped if further bradycardia or other arrhythmias develop.7

To lower potassium levels, 1 mL/kg 50% dextrose diluted to 25% and 1 unit of regular insulin were administered IV. Dextrose increases endogenous insulin release, pushing potassium into cells.7 Because of its hyperosmolarity, dextrose should be diluted to at least 25% to reduce the risk for peripheral phlebitis. Insulin administration further promotes intracellular potassium exchange. Serial monitoring of blood glucose, with or without dextrose supplementation, is essential after administration of insulin to avoid iatrogenic hypoglycemia.

Alternative therapies for reducing hyperkalemia include sodium bicarbonate or albuterol. Sodium bicarbonate (1 to 2 mEq/kg),6 an alkalizing agent, exchanges hydrogen ions for potassium.8 The effect is slower than that of alternative therapies and affects acid–base status. Albuterol (1 puff), a β-adrenergic agonist, stimulates the sodium–potassium pump by pushing potassium intracellularly.9 Because hypoglycemia is not a side effect, albuterol and sodium bicarbonate are especially suitable if outpatient care is the only realistic option for the cost-conscious client.

After Josie’s initial crisis was controlled, she was admitted to the intensive care unit, where IV crystalloid fluid therapy was started at 120 mL/kg/day, twice the maintenance dosage. Lactated Ringer’s solution was used because it is potassium deficient (4 mEq/L). Physiologic sodium chloride could also be considered because it is potassium free; however, caution must be taken to not increase sodium values too quickly. Rapid changes in sodium can cause cerebral edema and result in severe neurologic changes. The sodium concentration of 0.9% sodium chloride is 154 mEq/L compared with 130 mEq/L in lactated Ringer’s solution.10 Dextrose 2.5% was added to the IV fluids to preemptively treat iatrogenic hypoglycemia from insulin administration. Dextrose supplementation was discontinued after 6 hours because Josie was hyperglycemic (glucose 172 mg/dL).

While hospitalized, Josie received maropitant at 1 mg/kg IV q24h, steroid replacement with dexamethasone-SP at 0.2 mg/kg IV q24h, and 1 subcutaneous injection of desoxycorticosterone pivalate (DOCP) at 2.2 mg/kg. Josie did not experience any vomiting and ate voluntarily within 10 hours of presentation. Her IV glucocorticoid steroid was transitioned to oral prednisone 2.5 mg (0.6 mg/kg) q24h.

After 2 days of hospitalization, Josie’s condition was stable and she was discharged. Discharge instructions included prednisone at 2.5 mg PO q24h for 3 days, tapered to a physiologic dose of 1.25 mg (0.3 mg/kg) PO q24h. Josie was also scheduled to receive a DOCP injection 1 month later. She was currently receiving this same regimen of daily prednisone and monthly DOCP at the time of publication.

The adrenal glands, situated cranial to the kidneys, produce mineralocorticoids, corticosteroids, and sex hormones within the outer cortex and catecholamines within the central medulla.

Cortisol, the primary glucocorticoid, is regulated by a negative feedback loop. The hypothalamus releases corticotropin-releasing hormone, signaling the anterior pituitary to release ACTH, which then tells the adrenal cortex to release cortisol. When physiologic cortisol levels are reached, the adrenal cortex signals back to the anterior pituitary and hypothalamus to stop releasing corticotropin-releasing hormone and ACTH.1 Cortisol helps regulate blood pressure, blood volume, and blood glucose levels. During times of stress, cortisol is released in larger amounts.

Aldosterone, the primary mineralocorticoid, is responsible for normovolemic and electrolyte homeostasis by sodium, chloride, and water absorption and potassium excretion.1 Low aldosterone levels decrease the glomerular filtration rate, which then stimulates the renin-angiotensin-aldosterone system (FIGURE 2). 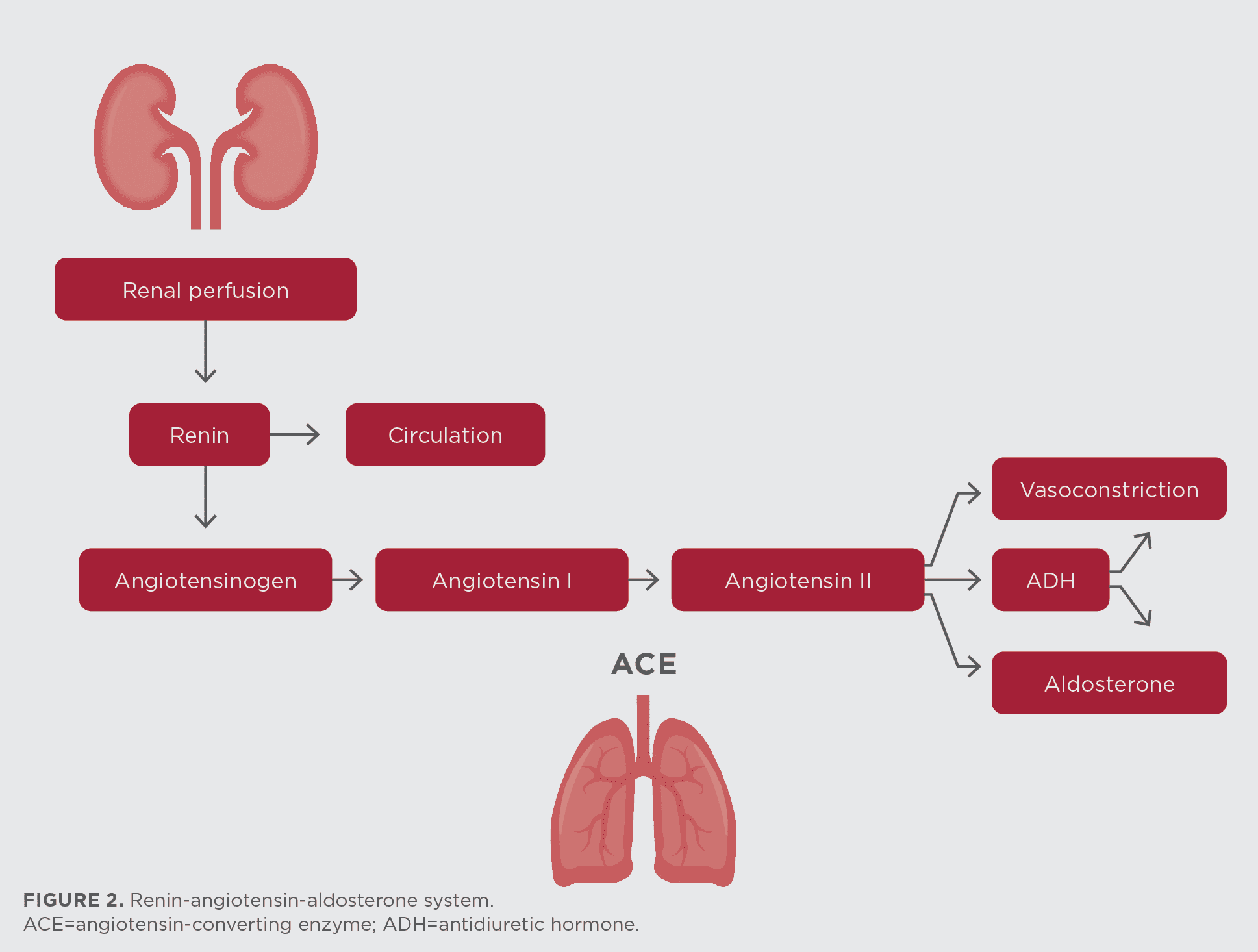 Although the exact etiology is unknown, primary hypoadrenocorticism is commonly accepted to result from immune-mediated destruction of the adrenal cortex. Other causes of adrenal destruction include neoplasia, trauma, infectious infiltrates, hemorrhage, hypoperfusion, and iatrogenesis. Secondary hypoadrenocorticism results from pituitary or hypothalamic dysfunction, frequently associated with exogenous steroid withdrawal.1

To diagnose hypoadrenocorticism, the gold standard is ACTH stimulation testing. To perform this test, a baseline serum sample is obtained for a resting cortisol value. Next, 5 µg/kg of cosyntropin, a synthetic molecule that mimics the effects of ACTH, is administered intravenously.11 One hour later, a second serum sample is obtained for a post-ACTH cortisol value. An absent-to-minimal response, such as Josie’s, indicates insufficient adrenal activity, consistent with hypoadrenocorticism. Results can be inaccurate if synthetic steroids (e.g., prednisone) cross-react with the assay. However, for patients in an addisonian crisis, early steroid therapy is necessary to control clinical signs. For these patients, dexamethasone should be used because it does not cross-react with cortisol and usually will not affect results.12

Treatment of hypoadrenocorticism includes glucocorticoid and mineralocorticoid replacement. For glucocorticoid replacement, dexamethasone and prednisone or prednisolone are commonly used. Dexamethasone-SP (0.1 to 0.2 mg/kg loading dose, followed by 0.05 to 0.1 mg/kg IV q12h) is used initially until oral medications are tolerated. Prednisone is then administered at 0.1 to 0.2 mg/kg daily and tapered to the lowest dose possible. Side effects of glucocorticoids include polyuria, polydipsia, polyphagia, weight gain, poor hair coat, vomiting, diarrhea, and hepatopathy.

For mineralocorticoid replacement, DOCP is administered at 1.6 to 2.2 mg/kg IM.14 Administration of DOCP is recommended every 3 to 4 weeks;1 however, a 2017 study concluded that the duration of action exceeds this recommended dosing schedule,15 which can thus be made more cost-effective by individualizing the dosing interval. As treatment for hypoadrenocorticism is lifelong, financial limitations play a major role in a client’s decision to treat. While determining an individual dosing interval, close attention to emerging clinical signs and electrolyte monitoring are crucial. An oral alternative to DOCP is fludrocortisone, a potent mineralocorticoid supplement with glucocorticoid activity as well. Although clinically used for its mineralocorticoid effects, dogs receiving fludrocortisone may not require additional glucocorticoid supplementation.16 Dogs receiving both fludrocortisone and prednisone may exhibit signs of hyperadrenocorticism (e.g., polydipsia and polyuria).

It has been over a year since Josie experienced her addisonian crisis. As of March 2022, Josie was doing well, thanks to the expertise of her emergency veterinary team. Although Josie’s condition is maintained well at her current medication dosages, the clients must be aware that stressful life events (e.g., visits to the veterinarian, car rides, moving, new additions to the family) may induce another addisonian crisis. Josie’s steroid dose may need to be increased during these times, as directed by her veterinarian.

Behind the Scenes: Steroidogenesis and Thoughts on Atypical Hyperadrenocorticism