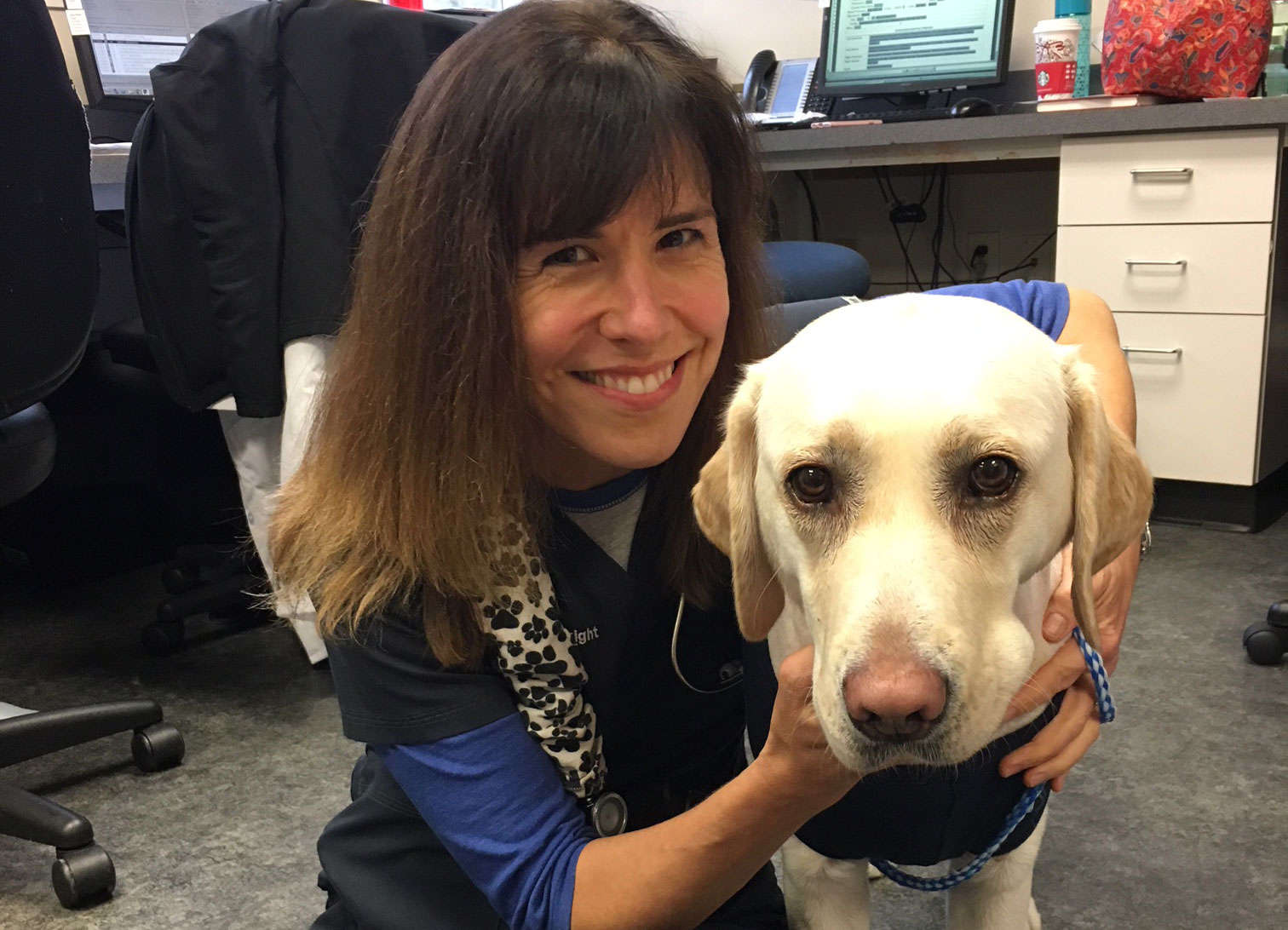 Dr. Kathy Wright, DVM, ACVIM, and Skype, a Labrador retriever, who was 2 years old at the time of his treatment. Photo Credit: Courtesy Dr. Kathy Wright

Morris Animal Foundation-funded researchers have developed a new treatment for dogs with a rare, but life-threatening, arrhythmia caused by atrioventricular accessory pathways (APs). The minimally invasive technique, which uses radio frequencies, is modified from a human cardiology procedure and has a more than 95 percent success rate in treating dogs with this type of arrhythmia.

The technique, radiofrequency catheter ablation (RFCA), was adapted by Dr. Kathy N. Wright and her colleagues at MedVet Medical and Cancer Centers for Pets. The team published their findings in the Journal of Veterinary Internal Medicine.

“Accessory atrioventricular pathways are one of the more common causes of rapid heart rhythms in young dogs and we were pleased to prove they are curable with radio-frequency catheter ablation,” says Dr. Wright. “It provides a cure of the underlying rhythm disorder, which is something that medications can never do. Medications can help suppress the arrhythmia, but never get rid of the underlying substrate — the accessory pathway — that is causing the arrhythmia. Catheter ablation does. It can lead to the reversal of myocardial dysfunction and congestive heart failure. Dogs are able to come off of not only their rhythm medications immediately, but also generally their function medications within 3 months.”

APs are abnormal electrical circuits in the heart that can become activated and overcome the heart’s normal current pathways, severely impairing its ability to pump. RFCA uses radio frequencies to destroy those rogue circuits and allow the heart’s normal function to resume.

“Dr. Wright’s study demonstrated that radiofrequency catheter ablation is a safe and highly effective alternative to lifelong medications and repeated veterinary visits for dogs,” says Dr. Kelly Diehl, interim vice president of scientific programs at Morris Animal Foundation. “Even better is that it’s a long-term solution for a problem that can be fatal if left untreated.”

“Ultimately, the procedure is economically beneficial to owners as well,” says Dr. Wright. “The lack of additional emergency visits and need to follow up with a cardiologist for life — in the case of medical management — quickly offset the cost of the procedure.”

In this study, the team used RFCA to treat 89 dogs with AP-related arrhythmia. While 23 breeds were represented, more than half of the patients were Labrador retrievers, as APs are more prevalent in that breed. The researchers threaded a catheter into each dog’s heart and then delivered radio waves toward the APs.

Each dog was monitored with telemetry for at least 16 hours after the procedure and before they were discharged. Within two months, the dogs’ heart activity was measured to determine the procedure’s effectiveness. In all but three dogs, initial treatment with RFCA cured the arrhythmia. The remaining dogs were cured with a second treatment.

Once considered relatively harmless rhythm disturbances, APs are now known to cause rapid heart rhythms that can result in congestive heart failure or sudden death. Symptoms can include extreme fatigue and gastrointestinal distress, including lack of appetite and vomiting. These symptoms are similar to other common health problems in dogs, making the condition difficult to diagnose. It’s not known how APs are created.

Read: Shock — An Overview, in which cardiogenic shock is discussed.