Behind the Scenes: Steroidogenesis and Thoughts on Atypical Hyperadrenocorticism

Mandy has over 17 years of experience as a Licensed Veterinary Technician (LVT). She obtained her certification as a Veterinary Technician Specialist (VTS) in Canine/Feline Clinical Practice in 2011 and is a Certified Veterinary Pain Practitioner (CVPP). She obtained a master’s degree in veterinary biomedical science in 2018 through the University of Missouri. She is employed by Comanche Trail Veterinary Center in Liberty Hill, Texas, as the veterinary nursing supervisor. Her primary interest is internal medicine, with endocrinology as her passion, and is an active advocate for the advancement of the veterinary nurse profession.

Credentialed veterinary nurses are continuing to expand their roles in veterinary medicine. One overarching field of interest is endocrinology, which affects every discipline to some degree. As credentialed veterinary nurses, we serve on the front lines of patient care; therefore, expanding our knowledge and critical thinking skills with regard to the underlying intricacies of endocrinology can be instrumental in case management. My intent with this article is to highlight the challenges behind interpreting common clinicopathologic findings that resemble those of hyperadrenocorticism, a steroidogenic condition.

The mechanism behind atypical hyperadrenocorticism is ambiguous; a multitude of possibilities may contribute to production and secretion of ACTH, cortisol, intermediate steroids, and/or other hormones, some of which may mimic cortisol’s biochemical actions. The pathogenesis may be associated with a benign or malignant tumor, hyperplasia, steroid enzyme deficiencies, and/or aberrant expression of G protein–coupled receptors (GPCRs), all of which disrupt normal physiology and feedback mechanisms.

We will first discuss the normal physiologic process of steroidogenesis and then the abnormal processes involved with atypical hyperadrenocorticism.

Normal physiologic control of adrenal steroids, including glucocorticoids, mineralocorticoids, and sex hormones, is regulated through diverse mechanisms and structures. The roles of these structures in steroidogenesis are discussed below. 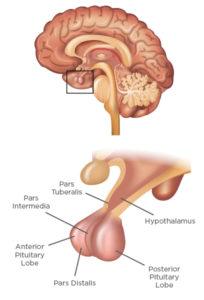 The hypothalamus plays an integral role in maintaining homeostatic regulation and is positioned just above the pituitary gland (FIGURE 1). Its role is to receive and interpret afferent messages and respond to demands. Its intrinsic receptors measure hormone concentrations and glucose levels through the blood.1 The paraventricular nucleus of the hypothalamus has numerous glucocorticoid receptors that mediate the synthesis and release of corticotropin-releasing hormone through negative feedback mechanisms. The messages received stimulate factors carried through the hypothalamo-hypophyseal portal system and either inhibit or stimulate the release of hormones from the pituitary gland, in which specialized endocrine cell types produce and secrete tropic hormones (hormones relayed from one endocrine gland to another) and play a pivotal role in messaging specific endocrine glands to function.2,3

The pituitary gland is divided into the neurohypophysis and the adenohypophysis, which is further divided into the pars distalis, pars intermedia, and pars tuberalis. The pars distalis encompasses the bulk of the anterior pituitary and consists of the following cell lines: corticotrophs, gonadotropes, lactotropes, somatotropes, and thyrotropes.3,4 Corticotroph cells synthesize ACTH through a precursor prohormone molecule, POMC (proopiomelanocortin). To synthesize ACTH, POMC must be cleaved at specific sites by prohormone convertase 1,5,6 ACTH is then released and targets the adrenal cortex.

The adrenal glands are composed of the adrenal cortex and the medulla. The cortex has 3 zones: the zona fasciculata, zona reticularis, and zona glomerulosa. The zona fasciculata and reticularis are controlled by ACTH, and the zona glomerulosa is controlled by the renin–angiotensin system. After ACTH binds to the adrenal glands’ GPCR, complex intracellular signaling begins, hydrolyzing cholesterol within the cytosol. This action allows for free transport of cholesterol to the mitochondria, where the cholesterol is then carried across the mitochondrial membrane by the steroidogenic acute regulatory protein to convert cholesterol to pregnenolone, the rate-limiting step in steroidogenesis.7 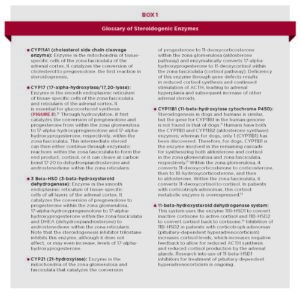 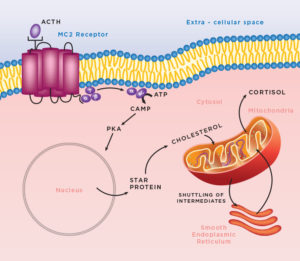 The Process of Steroidogenesis 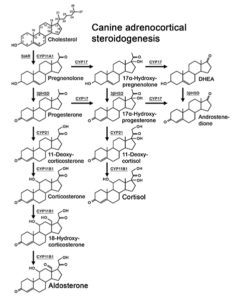 Steroidogenesis occurs through modification of the base structure of cholesterol, composed of 27 carbons. This modification produces and bioactivates a variety of other steroids. Which steroid is produced depends on cell signaling. Steroid hormones are not stored but are instead secreted immediately after biosynthesis, which is why cholesterol has to be readily available.9 When ACTH binds to the adrenocortical receptor (also known as the melanocortin-2 receptor) on the cell membrane, it activates adenylyl cyclase to increase levels of cyclic adenosine monophosphate (cAMP) within the cytosol (FIGURE 2). Through secondary messaging, cAMP activates protein kinases to phosphorylate enzymes required for cholesterol conversion and formation of specific steroids, all of which are determined through negative-feedback mechanisms.10 Enzymes responsible for production of steroids are from the family of cytochrome proteins (CYP) (TABLE 1).10,11 These enzymes are most commonly known for their roles in drug metabolism and detoxifying, but a subset of these enzymes is used for steroidogenesis (FIGURE 3).11

The main contributors to hyperadrenocorticism are functional tumors, either benign or malignant, which disrupt normal metabolic regulation and cell differentiation. 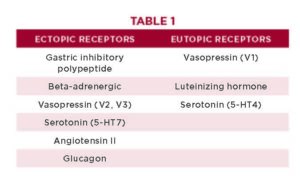 Many patients exhibit clinical signs that are associated with hyperadrenocorticism. Some cases are easily diagnosed and treated, but others remain uncontrolled even when ACTH test results are within normal limits. Other patients exhibit signs that resemble hyperadrenocorticism, but their adrenal and pituitary function test results are within normal limits. The physiology of the body is extremely complex; therefore, the reason(s) for the disruption can be extremely difficult, if not impossible, to pinpoint. Ongoing research of atypical hyperadrenocorticism has led to more questions with few answers.

The main contributors to hyperadrenocorticism are functional tumors, either benign or malignant, which disrupt normal metabolic regulation and cell differentiation. This disruption occurs in patients with spontaneous or atypical hyperadrenocorticism, but behavioral characteristics of the tumor may differ according to whether the tumor is an adenoma or carcinoma. Some mechanisms involved with tumorigenesis include the tumor’s ability to become desensitized to normal negative feedback. In the dog, adrenal tumors (adenomas and carcinomas) do not upregulate genes encoded for steroidogenic enzymes. The ability of an adrenocortical tumor to autonomously produce cortisol has been proposed to arise from the expression of aberrant receptors,16 associated with GPCRs. The expression of GPCRs stimulates steroidogenesis probably in the same manner as ACTH, in which after binding to its receptor, adenylyl cyclase is activated and stimulates the production of cAMP and activation of protein kinase A. This action enables phosphorylation of transcription factors that free up cholesterol and expresses steroidogenic enzymes to aid in steroidogenesis (adrenal carcinomas express a low level of the ACTH receptor gene).17 It is thought that both ectopic (abnormal site) and eutopic (normal site) GPCRs (TABLE 1) induce steroidogenesis through the same or similar cell signaling pathways. GPCR hormones such as gastric inhibitory peptide, vasopressin, and/or catecholamines have controlled cortisol secretion. Eutopic adrenal receptors include vasopressin (V1), luteinizing hormone, and serotonin (5-HT4). Ectopic adrenal receptors are gastric inhibitory peptide, beta-adrenergic receptors, vasopressin (V2, V3), serotonin, angiotensin II, and glucagon. When cortisol is produced by a non-ACTH stimulus, the negative-feedback mechanism is altered and endogenous ACTH stays low.18

Neuroendocrine tumors that ectopically secrete ACTH arise within the endocrine pancreas, adrenal medulla, intestines, thyroid gland, and lungs. Much like traditional adrenal hyperadrenocorticism, these ectopic ACTH–producing tumors fail to suppress cortisol during low-dose dexamethasone suppression testing but with imaging there is no adrenal tumor identified, making the search for the clinicopathologic alterations challenging.20 With regard to tumorigenesis, more and more literature is evolving on this pathogenesis, but more research is needed to understand the mechanisms and to develop more specific diagnostic options and more appropriate therapies to target the disease process more directly. 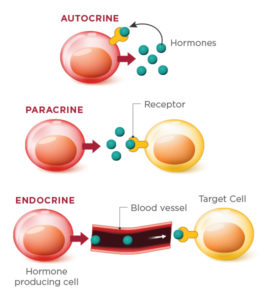 Intra-adrenal ACTH expression and its paracrine/autocrine action (FIGURE 4) on the production of excessive cortisol, involving tumors and adrenal hyperplasia, have been evaluated in human adrenocortical cells. The chromaffin cells of the normal adrenal medulla secrete low levels of ACTH, which may play a role, via paracrine action, in the pathogenesis of hypercortisolism. In addition, a subpopulation of adrenocortical cells within various adrenal tumors and adrenal hyperplasia produce detectable levels of ACTH.21 The complexity of steroidogenesis involving intra-adrenal ACTH expression and the paracrine/autocrine mechanism involved with it is being studied with regard to human medicine, and it may be a contributor to atypical hyperadrenocorticism in our canine patients.

The hypothalamo-pituitary-adrenal axis is regulated, through negative feedback, by neuro-hormonal communications, intracellular messaging, and transcription. Dysregulation of the hypothalamo-pituitary-adrenal axis can be secondary to a variety of disease states, including genetic, autoimmune, cancer, and inhibitory and stimulatory effects, all with the ability to effect primary and secondary cascades. Overall, the ability of normal adrenal steroidogenic cells to grow, survive, differentiate, and function requires ACTH, vasopressin, angiotensin II, and insulin-like growth factors, and the ability of these substances to elicit proper cellular communication with appropriate follow-through of biochemical cascades to carry out the message. Continued research and possible identification of more appropriate diagnostics and targeted therapies may unravel some of the mysteries behind the clinical manifestations that develop in our patients with atypical hyperadrenocorticism.