Steven is a registered veterinary technician at BluePearl Veterinary Partners in Sandy Springs, Georgia. He has been a surgical technician since 2007, and his practice has been limited to the orthopedics service since 2013. In 2014, Steven was admitted to the Academy of Veterinary Surgical Technicians (AVST), and he served as the president of the AVST during 2015–2018. Steven enjoys clinical research pertaining to veterinary surgery; topics of interest include stifle stabilization procedures, treatment and prevention of surgical site infections, and other orthopedic conditions. He and his boerboel, Bigwig, live north of Atlanta, Georgia.

TENDER LOVE AND CARE To limit possible complications associated with the postsurgical bandage, you should educate clients about bandage care. Photo: Shutterstock.com/Jaromir Chalabala

Veterinary surgical nurses (VSNs) are responsible for myriad roles in the preparation, care, and recovery of patients.1 These responsibilities generally extend to all patients being treated surgically, but orthopedic surgery patients may require additional considerations compared with soft tissue surgery patients. These considerations include the need for coaptation, increased risk for infection, and use of supplemental modalities to enhance healing. Holistic approaches to analgesia (local, regional, and parenteral) may also fall under the umbrella of orthopedic surgical care, but this topic is outside of the scope of this article. 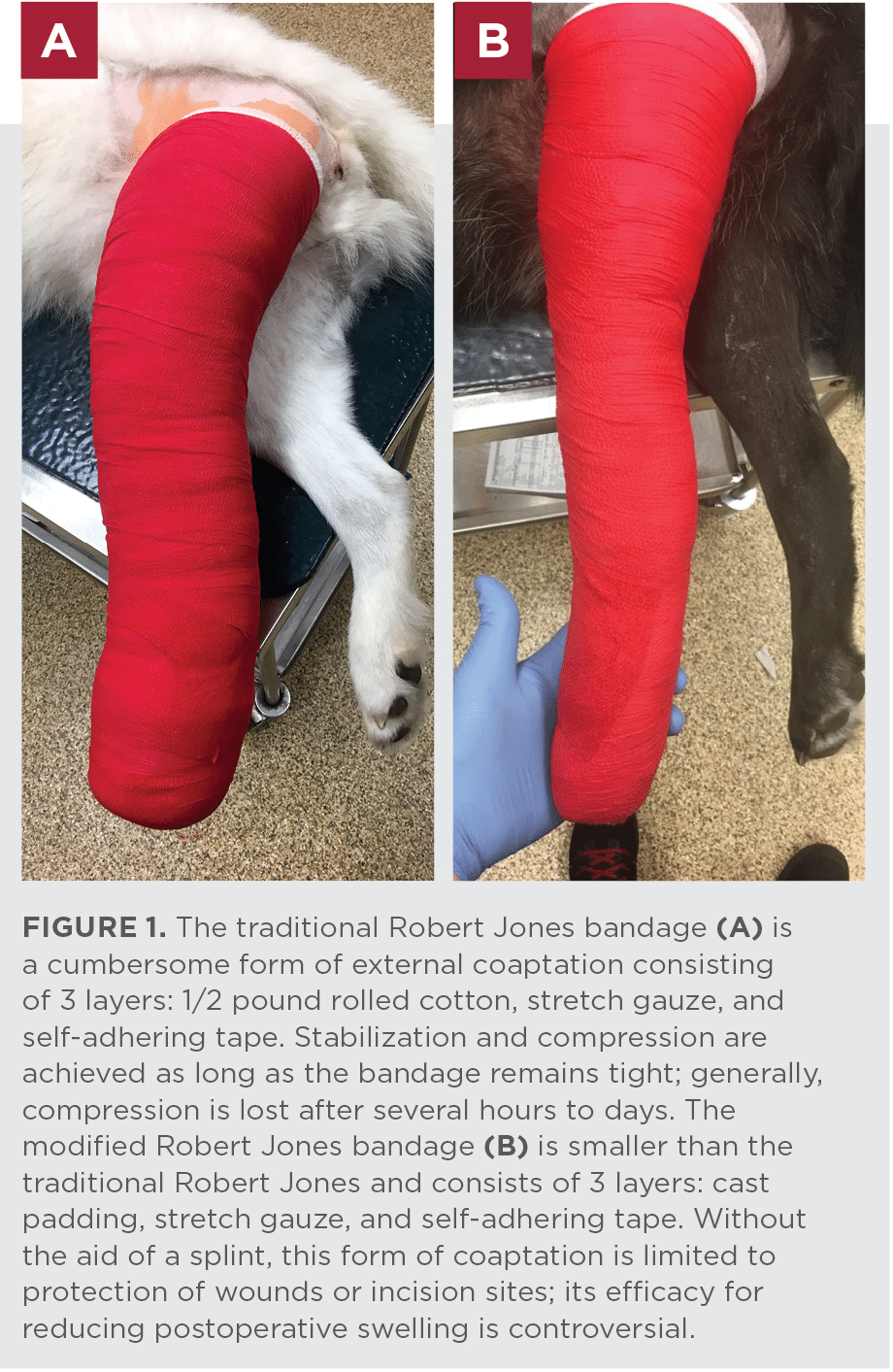 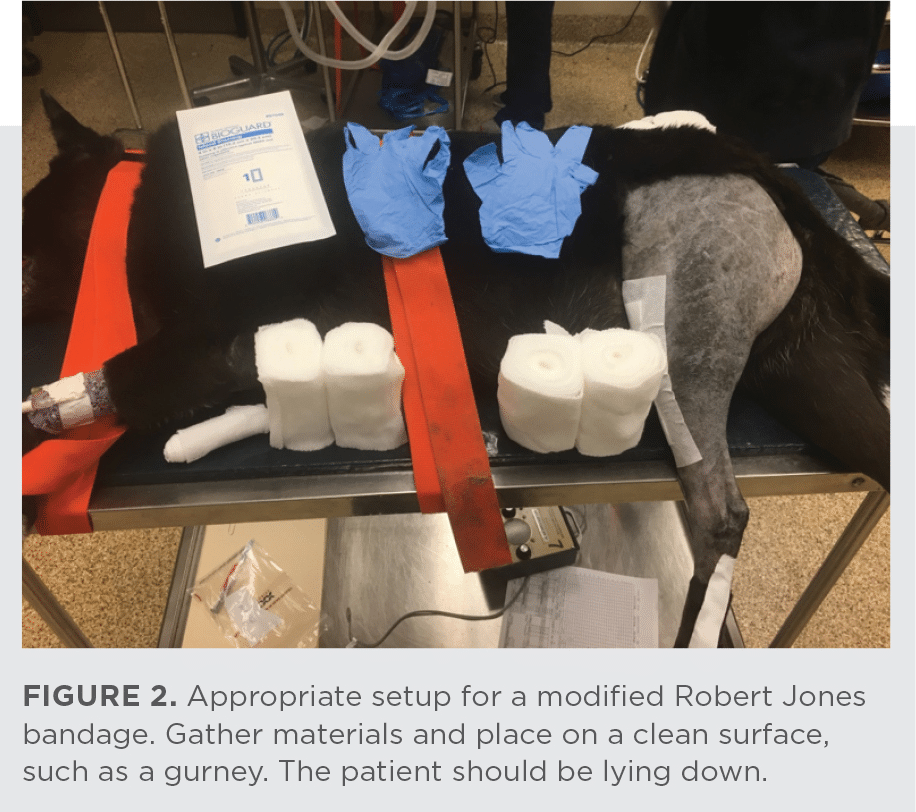 After the surgical repair has been completed, the VSN may be asked to apply further coaptation. External coaptation may be required for patients in whom rigid stabilization was not possible,2 to act as a barrier against surgical wound contamination,3,4 or to assist with continued immobilization of a joint.2,3 To limit possible complications associated with the postsurgical bandage, you should take care when applying and monitoring bandages and when educating clients about postoperative/bandage care.

Common complications associated with the use of external coaptation in animals include pressure sores,5 swelling,2 and ischemic injuries.6

Pressure sores result from inappropriate forces on the soft tissues under the bandage. Poorly fitted bandages may result in abrasions from friction between the tissue and bandage material. A poor fit or lack of adequate padding over prominent areas of the skeleton may irritate the soft tissues. Bandages should be replaced when they become loose.5 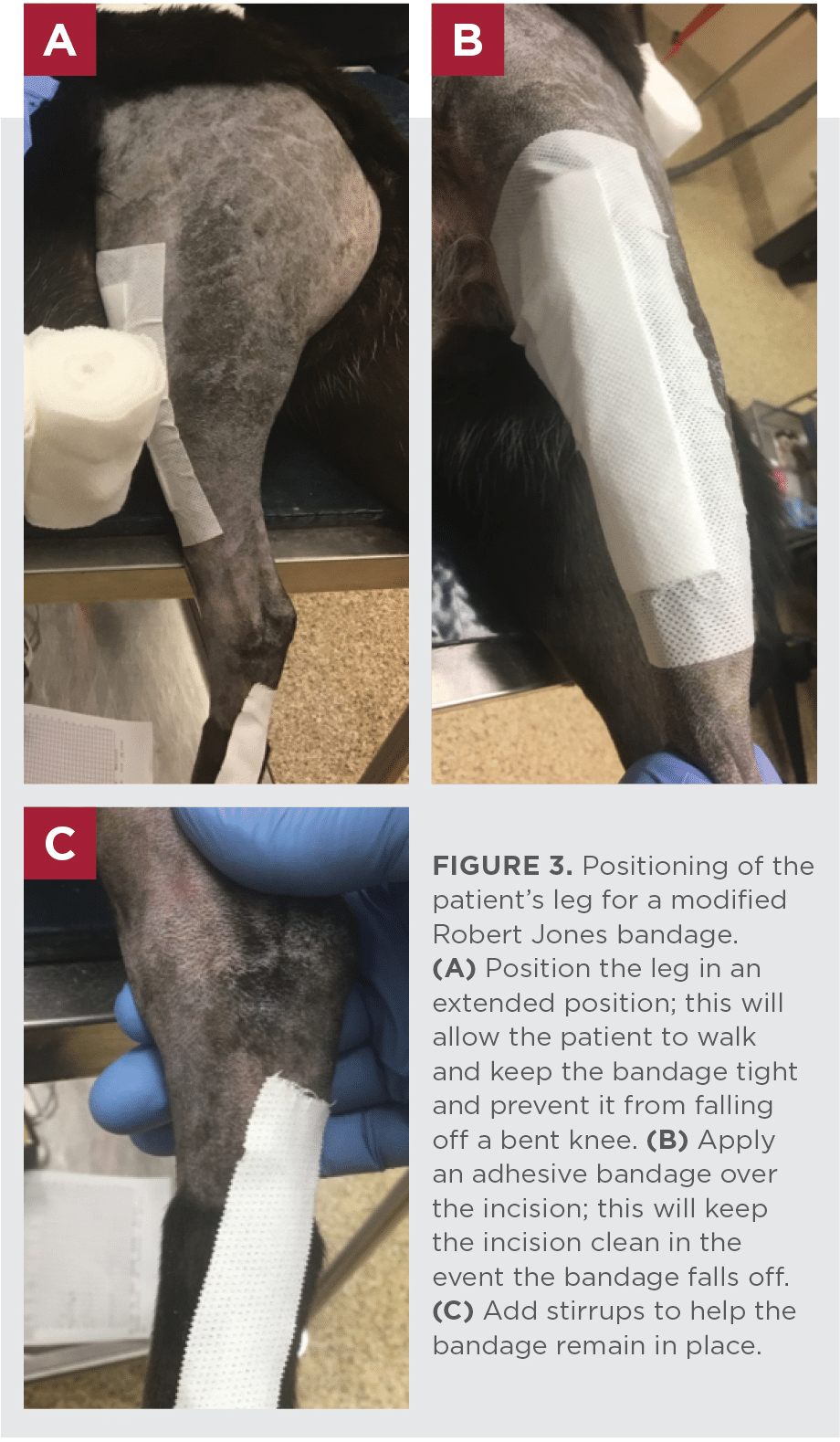 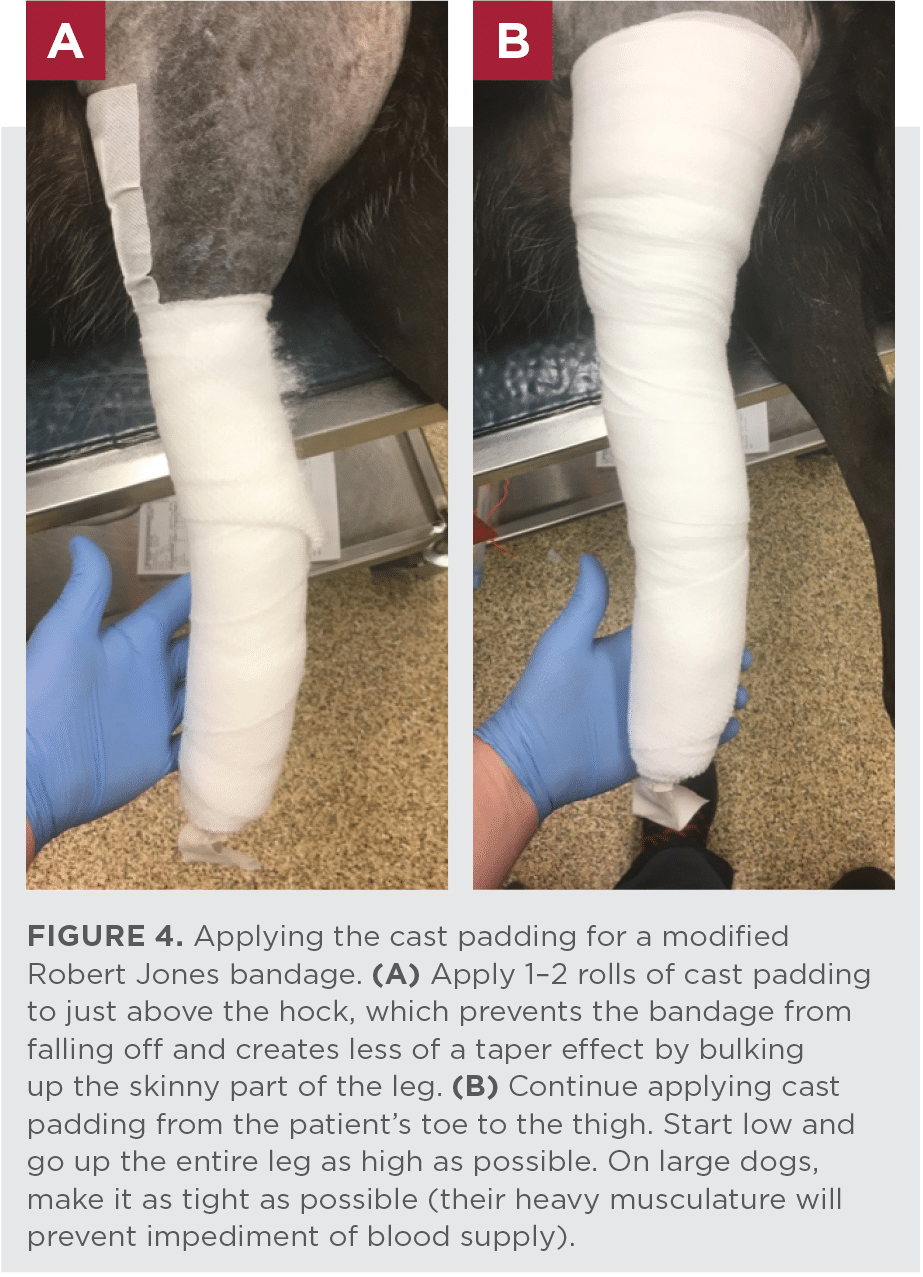 Swelling of the soft tissue around the bandage may result from inappropriate application. Attempts to limit postoperative swelling after orthopedic surgery have been studied, using modified Robert Jones bandages with and without the use of cold therapy.7,8 Neither compression with a modified Robert Jones bandage7 nor use of cold therapy8 in the postoperative period significantly reduced swelling or increased weight bearing on the limb. The use of light bandaging material to reduce incidence of nosocomial infection has been reported,9 and recently, use of a hydrogel liquid bandage was reported to be as effective as light bandaging material at reducing postoperative surgical site infection (SSI).4

Ischemia, or loss of perfusion, results from bandages that are placed too tight or left on too long. Ischemic injuries are serious, and they can occur with all types of bandages. Bandage-related ischemia of the limbs results in loss of tissue function and, in severe cases, requires amputation of the limb.6 Bandages should always be placed firmly; to avoid creating a tourniquet effect, bandaging should begin at the distal end of a limb and progress to the proximal end.2 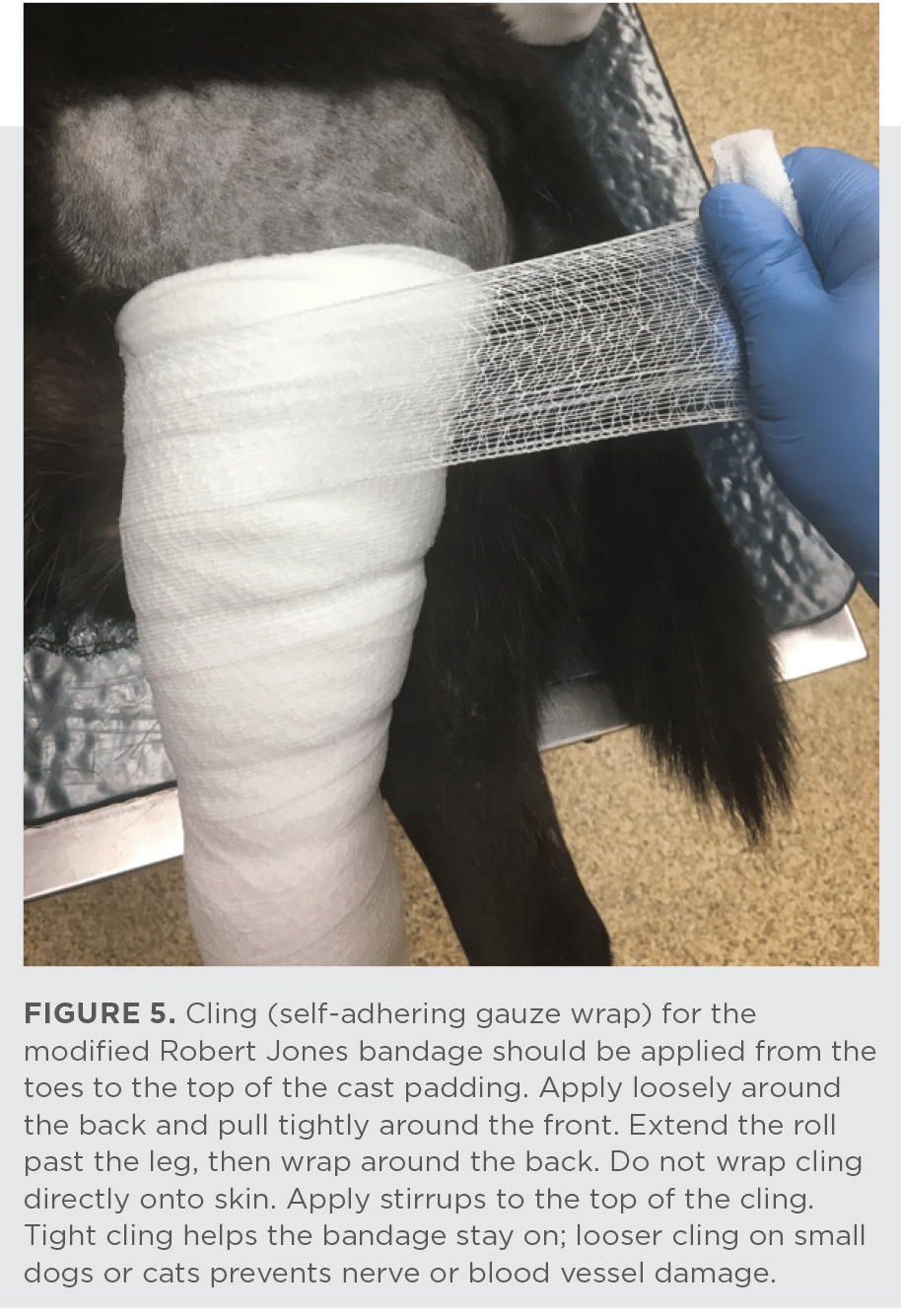 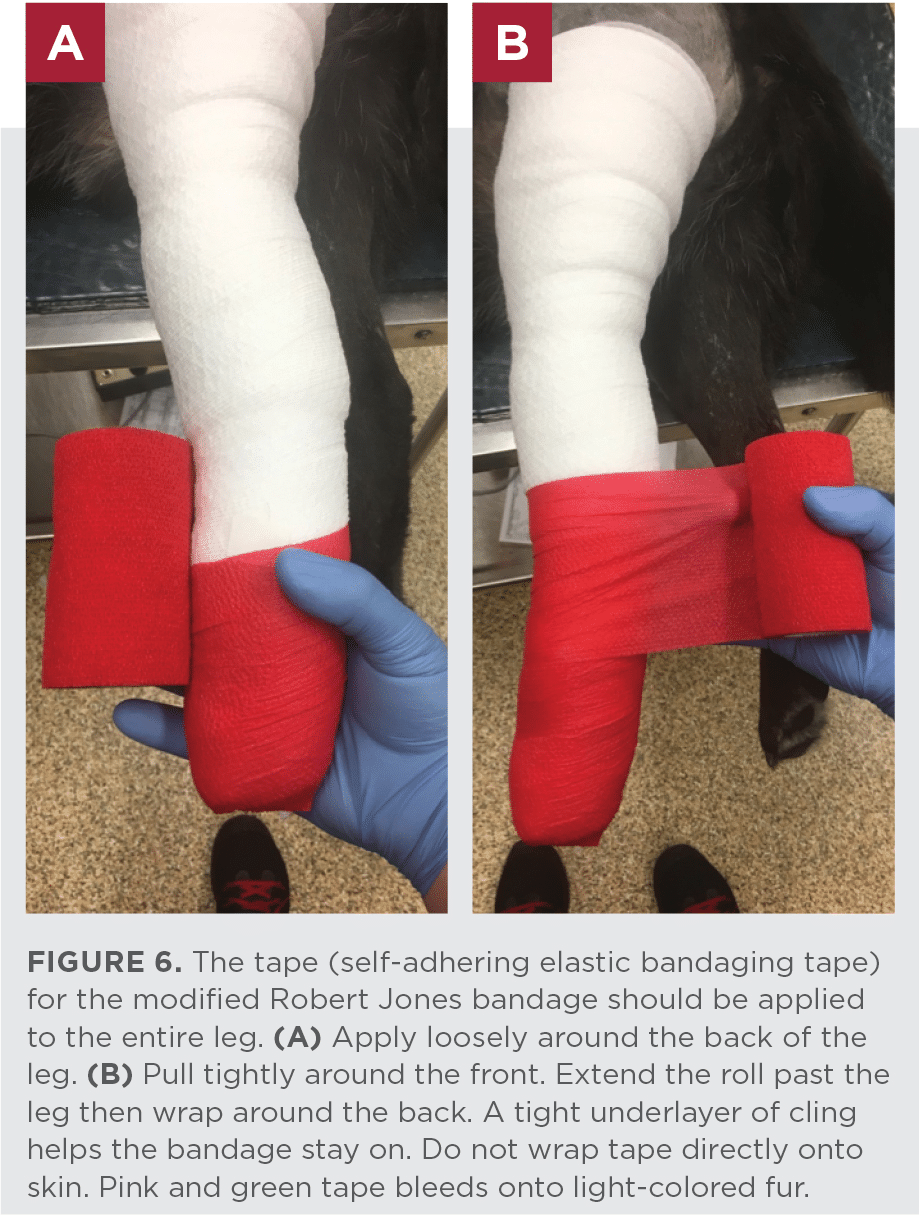 Passive SSI surveillance has been shown to be effective and economical. Passive SSI surveillance relies on identifying and analyzing trends that lead to SSIs.17 These trends may include procedure location, participating staff, or preoperative surgical wound classification. In human surgical practice, analysis of specific feedback to surgeons was found to effectively lower SSI rates, but these data should be kept confidential to avoid any stigma for certain staff members associated with higher SSI rates.15,18

Protocols for appropriate sterilization of surgical equipment reduce risk for SSI.15,20 There are many ways to accomplish sterilization (TABLE 2), although the most commonly used is steam sterilization in an autoclave.20 When equipment cannot be steam sterilized, chemical sterilization methods (e.g., ethylene oxide, hydrogen peroxide gas plasma) may be used.20 Because of the increased risk for SSI in surgical procedures involving implants, “flash sterilization” should not be used for these procedures except in emergency situations.15 For all cases, a high class (IV or V) indicator should be used to verify sterility of the pack contents; routine biological indicator tests should be run according to hospital protocols.20

Preoperative skin preparation begins during the first interaction with patients and their caretakers. Comorbidities that put a patient at increased SSI risk should be noted and discussed with the veterinarian so that a plan can be implemented. Although some practices may test urine for bacteremia before elective surgery, a study found that bacteriuria found by urinalysis does not correlate with a positive urine culture and that these data should not be used to determine eligibility for surgery.21 In some human patients undergoing joint arthroplasty, chlorhexidine gluconate shampoo (2%) is used as a prophylactic body wash for several days before the procedure. A study reporting the use of preoperative chlorhexidine gluconate bathing regimes found a significantly lower incidence of SSI in high-risk patients receiving the treatment than in similar patients that were not prescribed the treatment. However, treatment or lack of treatment did not significantly impact the prevalence of SSI in patients with low preoperative SSI risk.22 To my knowledge, this bathing regimen has not been reviewed in veterinary populations, but it may be effective for animals at high risk for SSI.

Postoperative SSI prevention in orthopedic patients may include appropriate handling of the surgical site, use of coaptation contact layers (thin, nonadherent sheets placed between the wound and other wound dressings), and the judicious use of antimicrobial therapies.15,23 The surgical site should be treated as an open wound, and the site should not be touched by personnel. The site should be aseptically cleaned of debris and covered with a protective layer before the patient leaves the operating suite.15 Antimicrobial therapies for prevention of SSI should be based on the risk for SSI.

In addition to sterilization of instruments, surgical site preparation, and care, the VSN may also be expected to prepare or administer supplementary treatments to enhance healing. Such treatments include administration of platelet-rich plasma (PRP) and extracorporeal shock wave therapy (ESWT) under supervision of the clinician.

PRP is a compound harvested from autologous blood. The blood sample is manipulated via specific protocols according to the instructions of the kit being used. VSNs should be capable of performing this sampling and preparation for administration as preoperative, perioperative, or postoperative therapy. PRP has many uses, including, but not limited to, significant gait improvement after untreated cranial cruciate ligament rupture,25 chondrocyte protection during injection of lidocaine into joints after arthroscopic procedures,26 and co-therapy during surgical repair of tendon rupture.27

ESWT uses sound waves to stimulate an inflammatory response28 and treat various disease processes. Shock wave technology was first used as a low-energy, targeted treatment to break apart stones in the kidney and urinary bladder (lithotripsy).29 Low-energy, targeted devices exist in veterinary medicine, but high-energy devices have gained traction in the treatment of orthopedic disorders in equine and small animal practices. Clinical studies have shown multiple areas of efficacy for this treatment modality, including orthopedic pain management30-33 and reduction of ligamentous inflammation after surgery.34

Recently, 2 studies evaluated the effect of each of these protocols (PRP and ESWT) on bone healing in patients who had undergone tibial plateau leveling osteotomy. In the respective studies, either PRP35 or ESWT36 was administered at the osteotomy site at predetermined postoperative intervals. Healing for patients receiving each of these treatments was compared with that of patients receiving placebo treatment. PRP administered at the osteotomy site before fixation did not significantly decrease healing time.35 However, ESWT application to the proximal tibia immediately after surgery and again 2 weeks later significantly shortened the time until the osteotomy radiographically appeared to be healed.36

Veterinary surgical nurses have a wide variety of jobs and responsibilities. Many of these jobs relate to soft tissue, neurologic, or orthopedic surgeries;1 however, certain aspects of the VSN’s job focus more strongly on preparation and care of orthopedic surgery patients. Understanding and implementing these skills may help VSNs perform more successfully and improve patient outcomes.

The author occasionally teaches ESWT therapy on behalf of Pulse Veterinary Technologies, LLC; this relationship did not influence the content of this article.

Supporting Emotional and Mental Health in the Veterinary Profession