MDR1 Genetic Testing: What You Need to Know

The American Kennel Club currently recognizes 30 breeds of dogs in its herding-breed group. Within that group are some of the most recognizable and beloved dog breeds in the world, including the collie and Australian shepherd. These dogs are common patients in most veterinary practices.

The study of genetics is revealing more about canine history and health than ever before. For example, hidden in the genetic code of many herding-breed dogs is a mutation that increases their susceptibility to drug toxicosis. Public awareness about this defect is increasing, but many websites dispense confusing information to breeders and owners. As an important component of client communication in the veterinary hospital, veterinary technicians can help sort out misinformation and assist clients in making decisions about the health of their dog. In addition, technicians must recognize which dogs are at risk and which drugs to avoid or administer with a reduced dose.

In 2001, Katrina Mealey, DVM, PhD, discovered that collies and other dogs with herding-breed heritage have a defect in the MDR1 (multidrug resistance 1) gene.1 The nomenclature for the MDR1 gene also includes the designation ABCB1 gene (adenosine triphosphate–binding cassette transporter). The MDR1 mutation causes a change in the code for an important component of the blood–brain barrier, P-glycoprotein.

In normal dogs, P-glycoprotein functions as a pump, moving potentially toxic compounds out of the central nervous system (CNS). It also transports substrate drugs across cell membranes and out of the body. This occurs at the level of biliary canaliculi, intestinal epithelial cells, and renal proximal tubular epithelial cells. Prescribed medications can therefore behave in a predictable manner when proper dosing instructions are followed.

Just like people, dogs inherit 1 copy of a gene from the father and 1 from the mother. A complete genome therefore contains 2 copies of each gene (1 from each parent). If a dog inherits 1 normal copy of the gene and 1 mutant copy, the dog is considered heterozygous for the mutation and is reported as mutant/normal. A dog with 2 abnormal copies is called homozygous, or mutant/mutant. A dog that does not carry any copies of the mutation is referred to as normal/normal.

It is confusing to refer to genetic results as “positive” or “negative” because the meaning in some contexts can be ambiguous. Similarly, the MDR1 mutation is a dominant genetic trait, so the use of the word “carrier” for heterozygous dogs is incorrect. Both heterozygous and homozygous dogs can show drug toxicosis when given P-glycoprotein substrates.

However, when the MDR1 mutation is present, P-glycoprotein is severely truncated, rendering it ineffective. Substrates for P-glycoprotein, including many common medications, remain in the CNS at toxic levels or are otherwise incorrectly metabolized or excreted. This can lead to severe and potentially fatal adverse drug reactions. Additionally, further research has revealed that P-glycoprotein plays a role in the regulation of the hypothalamic-pituitary-adrenal axis.2 In dogs that are homozygous for the MDR1 mutation (BOX 1), this important hormonal feedback system does not function normally, causing lower cortisol levels. The effects become apparent under periods of high stress, such as illness or extreme physical activity. These dogs may respond poorly to such increased energy demands and exhibit evidence of relative adrenal insufficiency. In some cases, physiologic doses of corticosteroids are indicated.

In the 1980s, when new parasiticides, such as ivermectin, were introduced, collie owners and veterinarians began reporting adverse drug reactions. Dog owners attempted to identify which dogs were most likely to have a reaction by using phenotypic qualities, such as coat color or markings. A common adage at the time was “white feet, don’t treat,” meaning that dogs with white feet were thought to be more susceptible to ivermectin toxicity.

Because of early reports of ivermectin toxicity in collies, that breed became the early model for researchers to discover more about this genetic mutation. It became clear that not only collies, but also other herding-breed dogs, possessed this abnormal genetic code.

By using advanced evolutionary genetic techniques, scientists traced the history of this mutation over time.3 It first appeared in a herding dog in Great Britain in the late 19th century, before the collie breed even originated. This anonymous dog may have possessed some desirable feature or skill, which meant that it passed its genes on to numerous descendants. Unknown to generations of breeders, the MDR1 mutation was passed on as well.

Eventually, dog breeds became more clearly defined. As new breeds developed from older ones, the genetic heritage followed. By analyzing how far back in the canine family tree a breed broke off from the foundation stock, geneticists can predict which descendant breeds potentially carry the mutation (BOX 2). 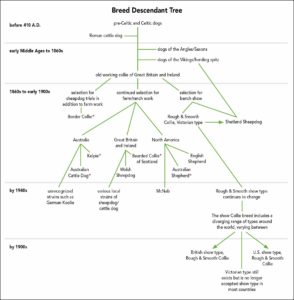 FIGURE A. University of California, Davis breed descendant tree. This chart shows historic relationships between contemporary collie breeds. *Selection for show by 1990, in some cases well before. Reprinted with permission of the creator, Linda Rorem.

The historic relationships between contemporary collie breeds are shown in the University of California, Davis breed descendant tree in FIGURE A. This is a simplified form; there have been other, lesser influences. Many breeds in addition to collie breeds are descended from the Roman cattle dogs, herding spitzes, and Celtic dogs. However, this tree shows only the collie and collie-related breeds that descended from the working shepherd dogs/collies of Great Britain.

This tree is not meant to imply that there was only one type of each ancestral shepherd dog. Throughout Britain there were many local variations/subtypes between and within regions, as well as common types across and within regions, a situation that is too complicated to be shown on this simple relationship chart.

The MDR1 mutation has been identified in 10 herding breeds, 2 sighthound breeds, and herding-breed mixed dogs (TABLE 1).4 Collies have one of the highest frequencies—approximately 70% are homozygous or heterozygous for the mutation. Australian shepherds and Shetland sheepdogs are also affected. The high incidence of the MDR1 mutation in long-haired whippets and silken windhounds is believed to be due to use of an affected herding dog to introduce a desirable trait at some point in the breed’s history.

Ivermectin is the drug most commonly associated with toxicosis, although many other drugs may also cause adverse reactions (BOX 3).5 Because of the public’s awareness of ivermectin-associated problems, many breeders and websites recommend avoiding all products containing this drug, including heartworm preventive agents. It is true that higher concentrations of ivermectin, such as those used for treating mange and other parasites, should not be administered to MDR1-affected dogs. However, dog owners should know that the doses of US-produced heartworm preventive agents recommended by manufacturers and approved by the Food and Drug Administration are safe for dogs with the mutation.

Conversely, off-label use of higher concentrations of large-animal ivermectin formulations for heartworm prevention has led to fatal consequences and should be avoided. In addition, care should be taken to keep dogs away from large animals that have been wormed with ivermectin. Even dogs that are unaffected by the MDR1 mutation may be exposed to toxic doses of this medication if they consume the feces of recently wormed cattle, horses, and sheep.

Veterinary staff may not be able to avoid using other medications on the known substrate list, especially when anesthesia or cancer treatments are necessary. With some analgesics and chemotherapeutic agents, a reduced dose is recommended.

A common over-the-counter antidiarrheal (loperamide) is also a known substrate. Veterinary technicians should be aware of the patient’s MDR1 status when an owner is giving this medication to treat diarrhea. The veterinary team may need to suggest alternatives until MDR1 testing is complete.

A common misconception found on many breed websites is that metronidazole is a problem drug for MDR1-affected dogs. Metronidazole is prescribed for protozoal and anaerobic bacterial infections. This drug is known to cause dose-related neurologic side effects, but this is not related to P-glycoprotein function.

Additionally, vaccination reactions are caused by immune-mediated issues, which are unrelated to the MDR1 mutation. However, clients with affected dogs may be apprehensive about giving any medications or vaccinations because of misleading information on public websites. This is a case where the veterinary technician can play an important role in preventing false information from keeping pet owners from making good treatment decisions.

Dogs exhibiting clinical signs of drug toxicosis should be evaluated quickly. MDR1-related drug toxicosis of the CNS often presents as vague neurologic signs, such as weakness, lethargy, ataxia, and disorientation. The owner may report that the pet has been stumbling and bumping into things. In severe cases, the patient will become nonambulatory and even comatose, and ventilator-assisted respiration may be necessary.

If the inducing medication has a reversal agent, such as naloxone for loperamide, it should be administered per the manufacturer’s recommendations. However, for affected dogs, the most important treatment is intensive supportive care, including IV fluids, nutritional support, and diligent patient monitoring. Recovery may be a lengthy process requiring the owner to be aware of the extent of the nursing care and expenses involved. MDR1-affected dogs receiving chemotherapeutic agents that are P-glycoprotein substrates are at increased risk for neutropenia, thrombocytopenia, and adverse gastrointestinal effects. Therefore, other options, such as alternative medications or dose reductions, should be investigated.

Unless a patient has a clear pedigree from a non–herding breed line, caution is advised before administering a known MDR1 toxic drug to any dog, especially mixed breeds. As mentioned, appearance alone is not a good indicator of the presence of herding-breed heritage.

Before the advent of genetic testing, it was necessary to guess which dogs would develop adverse drug reactions. Today, as part of a routine annual physical examination or initial new patient visit, the technician can discuss MDR1 testing with owners of herding-breed dogs or dogs that are potential herding-breed mixes. A test for the MDR1 mutation is available through the laboratory that first discovered the mutation, the Veterinary Clinical Pharmacology Laboratory at Washington State University (vcpl.vetmed.wsu.edu). The test can be performed with a cheek swab test kit or EDTA whole blood. The owner can directly order the test kit from the laboratory, or the veterinary staff can collect and submit the sample.

In addition, the veterinary technician can play a role in advising a dog owner of responsible breeding practices. In breeds with an MDR1 mutation frequency of >30%, eliminating all affected dogs from the gene pool is not recommended because of the risk for increasing the incidence of other undesirable genetic traits or health problems. It is possible, with knowledge of the MDR1 status of both the sire and the dam, to thin out affected dogs from the population over time (TABLE 2).

Recently, the MDR1 genetic defect has also been identified in cats,6 and ongoing research is looking at potential new drugs that are P-glycoprotein substrates.

The veterinary technician’s role places us squarely at the heart of recognizing risks, clinical signs, and preventive measures to keep our patients safe. One area where this comes into play is pharmacogenetics, the study of drug response or drug behavior based on an individual’s genetic makeup. It is a growing field in human and veterinary medicine, and the hope of veterinary pharmacogeneticists is to discover more about species, breed, and individual variations that put animals at risk for adverse drug reactions. Learning about pharmacogenetics and risk factors such as the MDR1 genetic defect can give technicians the knowledge they need to further protect patients against adverse drug reactions.

Find Your Passion Through Education!