Jodi Berls worked in another field for 25 years before heeding the call to veterinary medicine. Fascinated with birds and their welfare, she enrolled in Houston Community College’s Veterinary Paramedics Program in 2011. She achieved state-level certification as a Certified Veterinary Assistant (CVA) in 2013, then earned her Associate of Applied Science (AAS), veterinary technology, degree from Cedar Valley College, in Lancaster, Texas, and her license in 2016. Her passion for avian and exotic companion animals continues to grow, and she is particularly interested in maximizing the healing power of the hospital environment.

Who Will Win the Grand Prize?A panel of judges selected by the NAVC, Today’s Veterinary Nurse editors, and Zoetis® will choose 4 finalists whose case reports will be published in Today’s Veterinary Nurse during 2020. TVN‘s Facebook followers will then select the Grand Prize winner from among the 4 finalists; the winner gets a trip to VMX 2020, including registration, hotel, and airfare.

Hospitalized veterinary patients usually leave the clinic after a few hours or days. When they do not, however, long-term hospitalization can pose particular challenges, especially for sensitive exotic species. Add to this challenge an avian patient who hates being restrained, and you have the case of Chula, a self-mutilating cockatoo. Chula’s case demonstrates how constant monitoring, effective communication within the care team, low-stress handling, and in-hospital enrichment contribute to a favorable outcome.

Chula had been engaging in feather destructive behavior, which in captive psittacine birds is a complicated and often frustrating problem that can lead to self-mutilation. It is the most common behavior problem for which birds are presented to veterinary clinics.1 Pet birds may pluck or chew feathers in specific areas or over most of the body, damaging feathers and/or skin. Damage may extend deep into the tissues beneath the skin. Feather destructive behavior is not considered a specific disease or diagnosis but rather the outward indication of an underlying disorder.2 Numerous etiologies have been identified or proposed and include a variety of infectious and noninfectious conditions, psychological causes, and trauma.3 Self-trauma is most commonly reported in large cockatoos and African grey parrots. A complete discussion of feather destructive behavior and self-mutilation is beyond the scope of this report, but BOX 1 lists some predisposing factors.

BOX 1 Causes of Feather Destructive Behavior and Self-Mutilation in Birds
Feather destructive behavior, which can lead to self-mutilation, is a multifactorial condition with a large number of possible medical, behavioral, and environmental causes. Predisposing factors include4:

Chula is a 25-year-old female Moluccan cockatoo. On May 4, 2018, she was brought to our clinic with a severe self-inflicted wound in the left inguinal region, extending distal to the stifle, and a smaller wound in the cranial thoracic region. She did not leave the hospital until almost 3 months later.

Chula had been surrendered to a local sanctuary in July 2015, where she remained until her adoption in 2018. Shortly after moving to her new home, she began engaging in feather destructive behavior, which eventually graduated to self-mutilation. At that point, she was returned to the sanctuary, fitted with an acrylic restraint collar, and taken for medical care to the veterinary clinic that serves the sanctuary. Sanctuary staff believe the self-mutilation behavior was triggered by an unsuccessful effort to match her with a compatible male cockatoo for breeding purposes.

Except for the wounds and a large number of missing and tattered feathers on the breast, under both wings, and on the inguinal region of both legs, Chula appeared generally healthy. She was bright, alert, and in good body condition (weight 778 g). The left inguinal wound was 7 cm long, 2 cm deep, and involved severe damage to the skin and some of the underlying muscle of the medial thigh, extending distal to the stifle. The smaller wound had been opened at the cranial point of the sternum. Feathers had been removed and the skin was abraded in the right inguinal region. The wounds were not actively bleeding at the time of presentation. We assumed that the wounds were painful, although the only sign of discomfort was Chula’s initial reluctance to step up onto a hand or perch.

Because of financial constraints, Chula’s treatment plan was based on patient history and physical examination. A diagnostic workup of complete blood count, blood chemistries, fecal examination, and radiographs was not performed.

For most cases of feather destructive behavior, the recommended treatment involves a physical barrier (e.g., collar or vest) to prevent further tissue damage, long-term antimicrobial therapy for secondary infection, pain control, and psychotropic drugs when warranted. In addition to medical treatment, these patients often require management of any underlying disorder(s) and modification of their husbandry and environment to provide an improved diet, stress reduction, and adequate sleep.5

Our first priorities were to clean the wounds, address infection, and manage pain. We cleaned the inguinal wound by using hydrotherapy and flushing it with warm, dilute chlorhexidine (2% diluted to 1:40) q72h, after which time we packed Manuka honey and 1% silver sulfadiazine cream into both wounds. Prescribed medications were antibiotics (enrofloxacin, 20 mg PO q24h), pain medication (meloxicam, 0.75 mg PO q12h), and medication for treatment of presumed behavioral abnormality (fluoxetine, 0.72 mg PO q24h).

We attempted to bandage the wounds, but movement and the presence of feathers made both wounds difficult to cover (FIGURE 1). In addition, we were concerned that the bandages could increase damage at and near the wounds. When after a few days it became clear that bandages would not remain in place, we discontinued bandaging.

Surgery to close the wound was intentionally postponed until after the wound had closed on its own as much as possible, because of the risk for dehiscence in such a highly mobile area. However, intensive nursing care resulted in the wound closing without surgery (FIGURE 2). On June 26, surgery was canceled, antibiotics and hydrotherapy were discontinued, and cold laser therapy q72h was added (3 min at 1.0 watts/sec on the manufacturer’s preset for contaminated wounds; we used a Class IV veterinary therapy laser, which offers reduced treatment time and greater penetration). 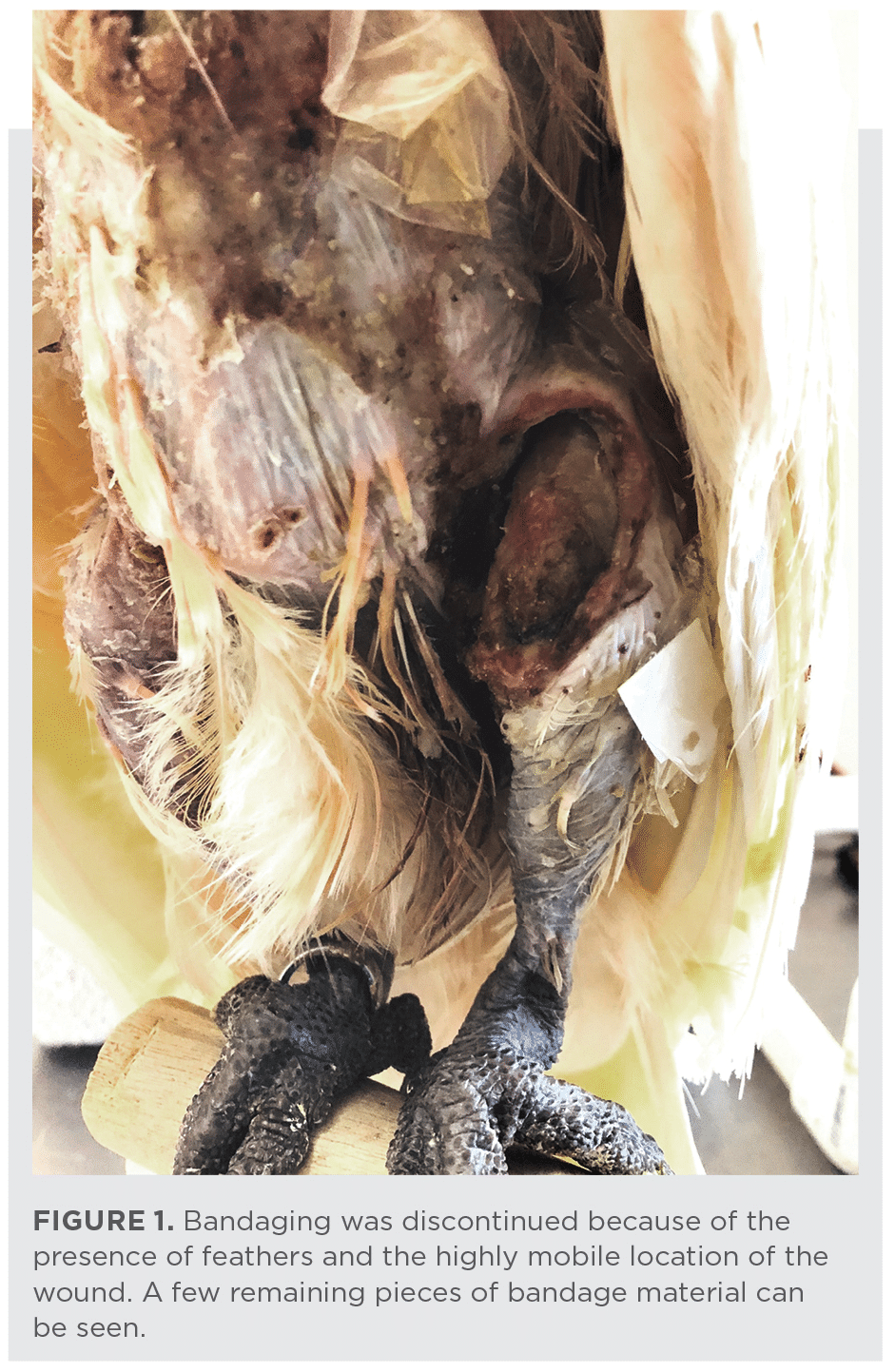 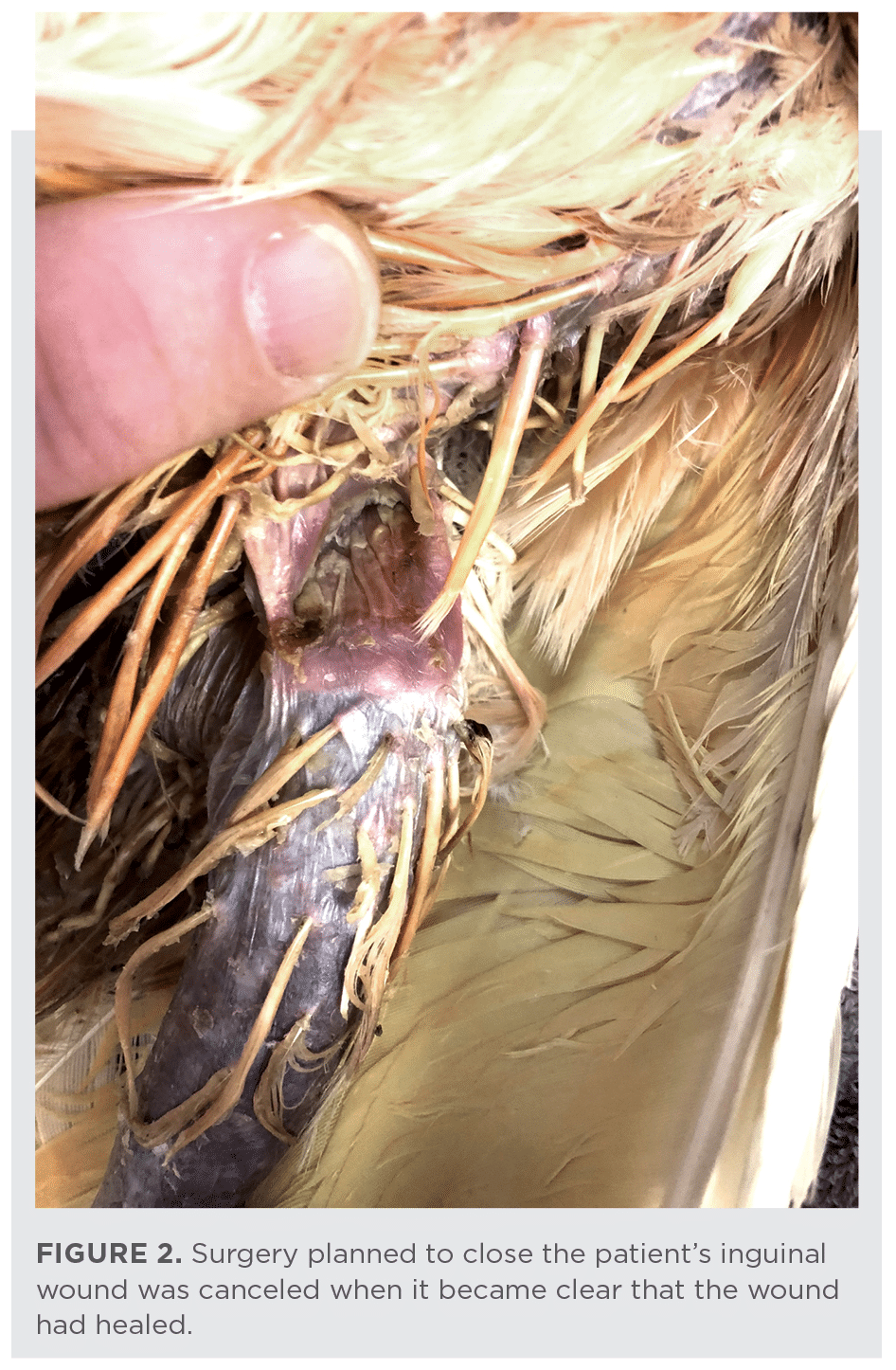 Sanctuary staff believe the self-mutilation behavior was triggered by an unsuccessful effort to match her with a compatible male cockatoo for breeding purposes.

Long-term nursing care is always a team effort because no one person is on duty at all times. Communication among care team members becomes essential, and the team must be committed to ensuring that small, subtle signs of a problem are addressed before they become more serious. In addition, members of the nursing team sometimes must be creative and improvise solutions to various problems that may arise.

Exotic species, such as Chula, are highly susceptible to stresses related to unfamiliar environments, people, and animals.

In the first few days of Chula’s hospitalization, the care team noticed occasional tiny flecks of fresh blood near the edges of the inguinal wound. No one saw Chula chewing at the wound, but she had been observed bending over in an effort to reach it. In addition, the restraint collar had rubbed at the thoracic wound, gradually enlarging it to about 4 cm. To prevent further damage, we attached a 10-inch diameter plastic shield to the ring collar (FIGURE 3). 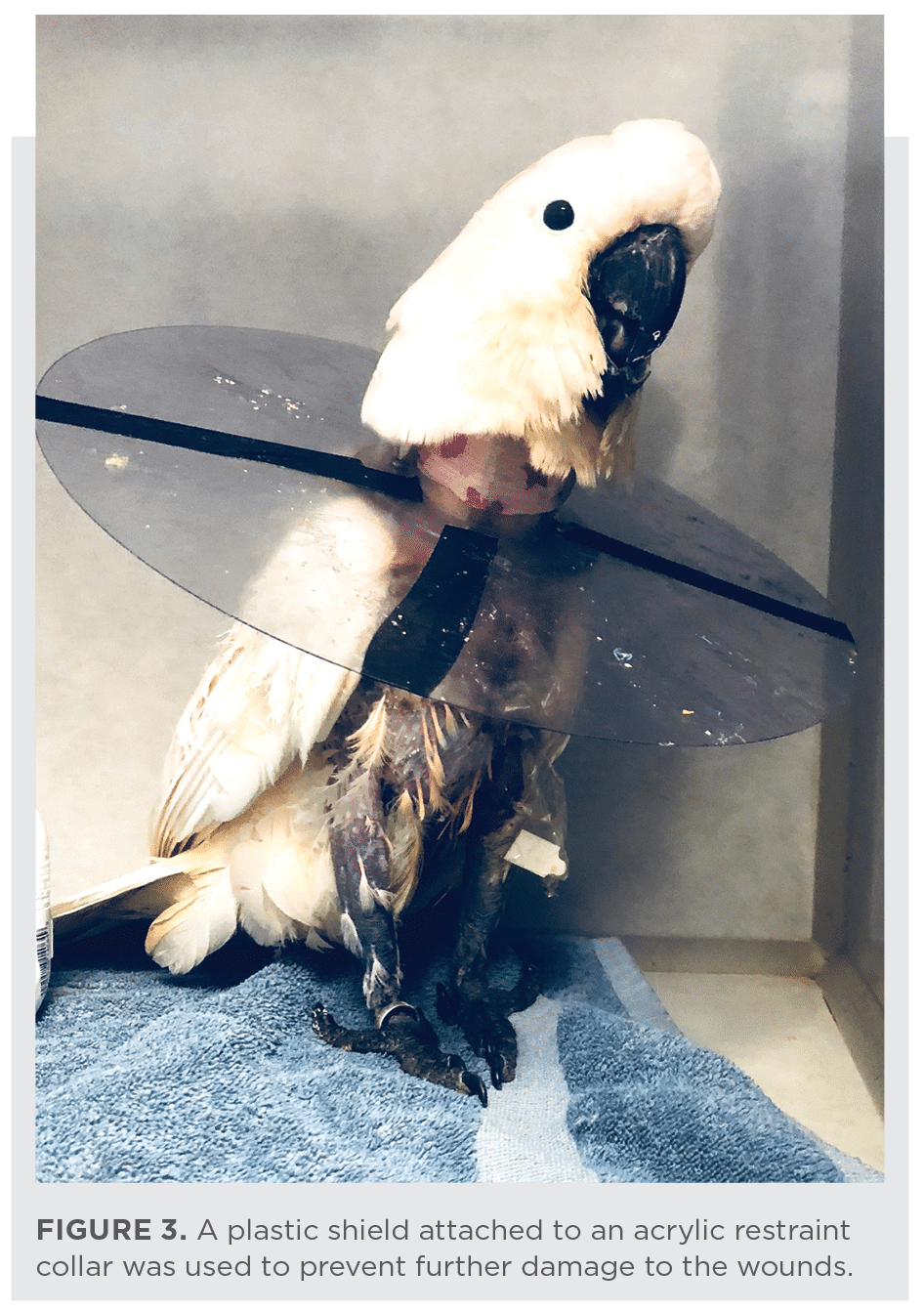 Although the collar and shield effectively prevented Chula from further self-mutilation, we became concerned that they might also interfere with her ability to reach her food. We therefore experimented with ways to increase the height of her food bowls to make food easier to reach and carefully monitored her weight. We discussed the possibility of decreasing the diameter of the restraint shield, but doing so became unnecessary when Chula learned to manipulate her body to get the shield out of her way. She gained approximately 50 g during her hospital stay.

Consistency of care throughout Chula’s hospitalization was achieved by the twice daily recording of her weight, appetite, mentation, elimination, and receipt of medications. In addition, members of the team frequently left each other notes detailing problems and solutions.

Exotic species, such as Chula, are highly susceptible to stresses related to unfamiliar environments, people, and animals. They can react violently to unpleasant procedures and tend to find restraint difficult to tolerate.

Chula is a friendly, well-socialized bird, but she screamed and thrashed when being restrained for her twice-daily medication and once-daily hydrotherapy sessions. Concern grew that the stress would compromise her recovery, particularly because stress seemed to have been a predisposing factor in her self-mutilation. The team began injecting her medications into pieces of fruit (tangerine segments, grapes) and small chunks of bread. She ate the medicated items with enthusiasm, thereby avoiding the need for restraint. She would stand freely, without restraint, on a hand or a perch while the inguinal wound was flushed and ointments were applied (FIGURE 4). Finding ways to get the patient to cooperate made daily treatments easier for everyone, especially the patient. 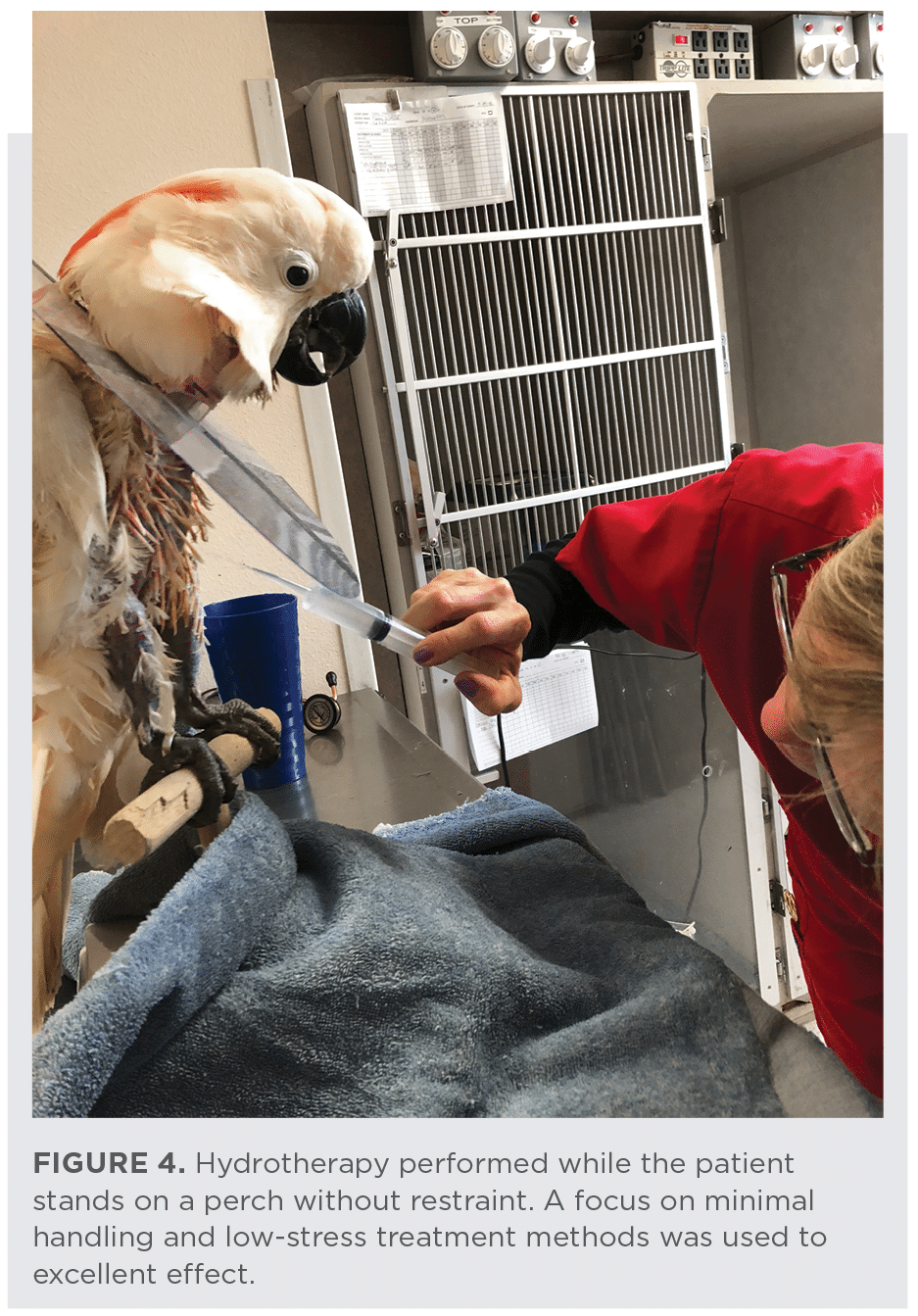 Birds are extremely intelligent and sensitive. They can quickly become bored and stressed when kept in a small cage for a long time. Members of the care team visited Chula several times a day and provided a variety of chew toys to entertain her, including wood chunks, cardboard cores from paper towel rolls, compressed paper rings (“birdie bagels”), and yucca “bird kabobs.” Her own adaptation—chewing the towels that lined her cage—prompted us to change her cage lining to newspaper. When the newspaper left smudges of ink on her feathers, she was bathed and the newspaper was switched to plain (unprinted) newsprint.

The team began injecting her medications into pieces of fruit (tangerine segments, grapes) and small chunks of bread. She ate the medicated items with enthusiasm, thereby avoiding the need for restraint.

On July 25, 2018, Chula returned to the sanctuary. As of late October 2018, she had not resumed any self-mutilation behaviors. Her mobility was unaffected by the injury—she was walking and climbing normally. Her plastic restraint collar and shield were replaced by a sock around her upper body, which allows freedom of movement while providing a distraction from feather destruction (i.e., she chews the sock instead of her feathers) (FIGURE 5). Her feathers have not fully recovered, but feather quality will probably improve after her next molt, except for some areas where feather follicles have been damaged, in which case the feathers will not regrow.

Because most hospitalized veterinary patients leave the clinic after a few hours or days, it is a special experience to develop a long, intimate relationship with a patient. Similar techniques can be applied to enhance the outcomes of short-term patients. And although this case involved an avian patient, the techniques used to enhance Chula’s hospitalization can be applied to patients of other species. 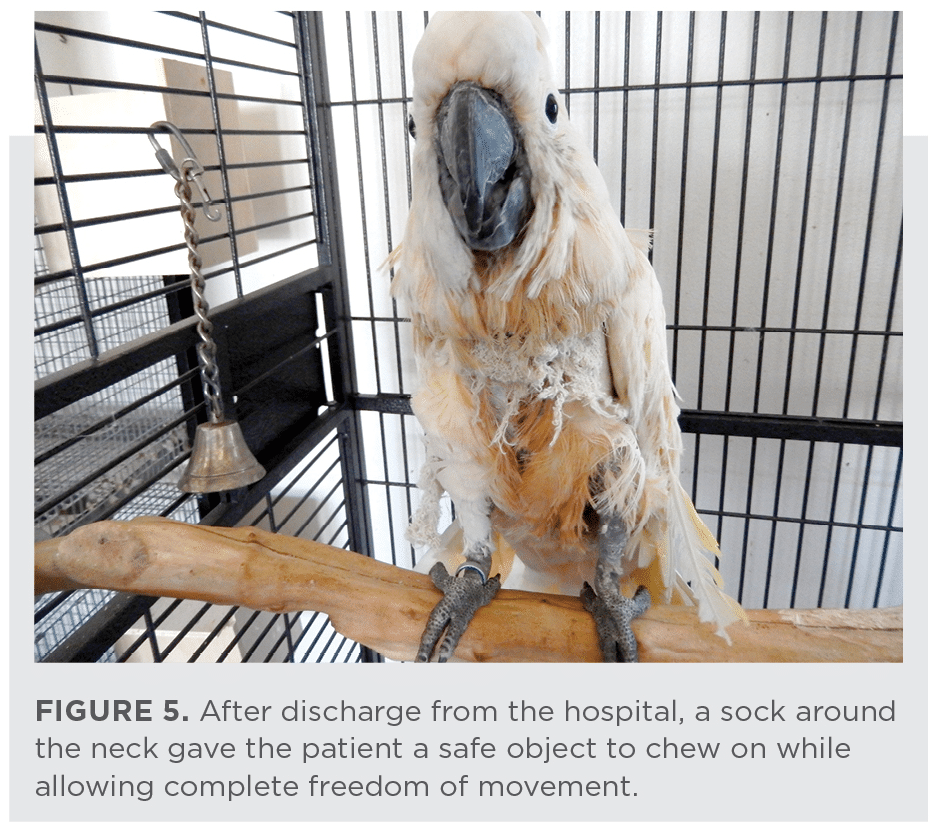 Examining Racial Diversity in the Profession