Carrie has been working as a certified veterinary technician at the ASPCA Animal Poison Control Center (APCC) since 2007. She obtained her associate’s degree in veterinary technology from Parkland College in 2003 and her bachelor’s degree in natural resources and environmental science from the University of Illinois in 2006. She worked for 2.5 years at a small animal clinic while in college and has assisted with several research projects in fish and wildlife ecology.

During her 10 years at the APCC, Carrie has gained a wealth of knowledge in the field of toxicology. She has been published in several peer-reviewed journals and is currently studying to become a board-certified toxicologist.

In the field of veterinary toxicology, numerous agents can result in severe toxicosis for domestic pets. Interrupts is a term used by the ASPCA Animal Poison Control Center (APCC) to describe an agent that can cause a sudden onset of life-threatening clinical signs. With these agents, home treatment is generally not recommended and emergency care is required even for small exposures. This article focuses on three interrupt agents to which dogs can be exposed: 5-fluorouracil (5-FU), zinc phosphide, and hops.

5-FU is an antineoplastic drug known as an antimetabolite.1 It is used in human and veterinary medicine for cancer treatment.1 Although 5-FU is available in injectable form, toxicosis in domestic pets commonly occurs from accidental exposure to topical formulations (cream or solution) ranging in concentration from 0.5% to 5%.2 Between 2010 and 2016, the ASPCA APCC had 340 documented cases involving 5-FU. Of those 340 cases, more than 90% involved pets being exposed to topical creams or solutions either by chewing products prescribed to the owner or licking the owner’s skin after application.3

5-FU is significantly toxic to rapidly dividing cells because of its interference with RNA synthesis and inhibition of thymidylate synthase, causing DNA instability.2 As a result of this mechanism of action, the gastrointestinal (GI) tract and bone marrow are sites severely affected by 5-FU.2 5-FU can also cause severe neurotoxicity. The mechanism of action is still unknown, but the metabolites of 5-FU are suspected to be the leading culprits.1,4 The most common signs associated with 5-FU toxicosis include severe vomiting and seizure activity.2,3 Vomiting can occur within minutes of exposure, with seizures developing within the first several hours.1,4 Other signs sometimes observed include ataxia, depression, tremors, cardiac changes, respiratory changes, myelosuppression, and death.1–3 Doses as low as 5 mg/kg can result in toxicosis, with doses of 40 mg/kg being fatal.2 Patients with severe toxicosis commonly die within 24 hours.2 Prognosis with 5-FU exposures is guarded; more than 50% of patients do not survive even with intensive care.1

Treatment of 5-FU exposures involves managing seizure activity and vomiting, as well as protection of the GI tract. Supportive and symptomatic care is also warranted. Decontamination via emesis is recommended only with recent exposures (less than 1 hour) and in asymptomatic patients.2 Diazepam alone is generally not effective in managing seizures.1–3 Phenobarbital followed by a CRI of diazepam has shown to be effective clinically in management of seizures, as has general anesthesia and propofol.3 For patients experiencing refractory status epilepticus, levetiracetam should be considered.3

Zinc phosphide is an inorganic rodenticide commonly used to control mice, rats, rabbits, gophers, voles, and moles.5 It is commonly sold in pelleted form or mixed with grain at a 2% concentration.6 The toxic effect of zinc phosphide primarily occurs from the production of phosphine gas after oral exposure. The phosphine gas, produced by reacting with acids in the stomach, is then absorbed into the bloodstream from the GI tract or may be inhaled into the lungs as gas escapes from the stomach.5,6 Zinc phosphide that has not been converted to phosphine gas can also be absorbed from the GI tract intact.5,6 Zinc phosphide toxicosis results in organ damage, with the heart, liver, kidneys, and central nervous system being the primary targets.5,6 Irritation of the lungs and GI tract is also prevalent.6

Clinical signs include vomiting, severe GI pain, anxiety, depression, tremors, seizures, tachypnea, and increased respiratory sounds.6 Other signs may include diarrhea, hypersalivation, anorexia, ataxia, tachycardia, and nonspecific behavioral changes.3,7 Clinical signs most commonly develop within 15 minutes to 4 hours after the initial exposure.6,7 Death, typically caused by cardiac arrest or pulmonary edema, can occur within 1 hour and up to 72 hours after exposure depending on the total dose.5 If pets survive the initial phase of clinical signs, there is a risk of kidney and liver failure within the following 2 weeks.6

The toxic dose of zinc phosphide is not well established. A pet that has food in the stomach may be more at risk for toxicosis because the increased production of stomach acid results in more phosphine gas being produced.6,7 With recent exposures and in asymptomatic patients, emesis should be induced, in a well ventilated area, with a central acting emetic such as apomorphine.6 Liquid antacids, such as aluminum hydroxide or magnesium hydroxide, should also be administered to help to decrease the production of phosphine gas in the GI tract.3,6 There is no antidote available for zinc phosphide toxicosis.5,6

Treatment is predominantly supportive and symptomatic care.6 It should be noted that phosphine gas, released from the patient’s stomach or vomitus, can be poisonous to humans. The presence of phosphine gas can be identified by a garlic or rotten fish odor.6 Vomitus should be quickly disposed of in an airtight container. Owners who are transporting an exposed pet to a veterinary facility should be instructed to drive with the windows down to limit exposure to phosphine gas if the pet were to vomit or eruct in the car. A human poison control center may need to be contacted if the smell of phosphine gas is detected. 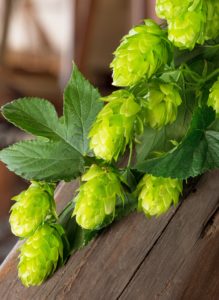 HUMULUS LUPULUS (HOPS) is a plant used in brewing beer. Dogs are commonly exposed after used hops have been discarded in the garbage, yard, or compost pile by an owner who is home brewing.

Humulus lupulus, commonly referred to as hops, is a plant used in brewing beer. The flower or cone from the female plant has lupulin glands containing resins and essential oils, which provide beer with its distinct fragrance and bitter taste.8 Hops can be found in flower, plug, or pellet form. Only about 15% of hop constituents are used in the brewing process.8 The remaining material, referred to as spent hops, is discarded.8 Dogs are commonly exposed after spent hops have been discarded in the garbage, yard, or compost pile by an owner who is home brewing.3 Hops toxicosis in dogs results in a condition called malignant hyperthermia.9 The toxic principle is unknown. Signs of toxicosis can develop within 60 minutes after ingestion.9 The most common signs observed include tachypnea, panting, hyperthermia, vomiting, agitation, anxiety, pacing, and tachycardia.3 Other frequent signs include erythema, injected mucous membranes, lethargy, diarrhea, seizures, and death.3 Significant elevation of creatinine phosphokinase and dark brown urine may also be observed.9

Management of hops toxicosis in dogs involves decontamination and management of hyperthermia through supportive and symptomatic care. Induction of emesis and administration of activated charcoal is warranted with recent exposures and in asymptomatic pets. Fluids, external cooling (fans or ice packs), and dantrolene are recommended to help manage hyperthermia.3 Hospitalization may be required for 24 to 48 hours or until clinical signs resolve.3

ROLE OF THE TECHNICIAN

It is vitally important that veterinary technicians and staff members are able to recognize these agents when an owner calls with questions regarding an exposure or when the pet presents directly to the clinic after an exposure has occurred. Owners may be unaware of the seriousness of the exposure, especially if the pet is still asymptomatic.

Because of the rapid onset of life-threatening clinical signs, home treatments should be avoided and the owner should be instructed to bring the pet directly to the veterinary hospital. Instruct owners to bring any packaging or product information with them to the clinic, if available.

Veterinary technicians will be responsible for preparing for a patient who may present to the clinic in critical condition. If it is anticipated that the services of an animal poison control center will be needed, it is recommended that the call be made (when possible) while the patient is in route to the clinic so that recommended treatments can be initiated immediately upon arrival at the veterinary hospital. Veterinary technicians will also be responsible for obtaining a history, doing the initial triage, collecting blood samples, running lab work, administering IV fluids and medications, and overall monitoring of the patient’s status.

Canine Uveitis and the Veterinary Technician

What Does a Rise in Antimicrobial Resistance Mean?