For its 2016 Conference, the NAVC asked veterinary professionals to share their stories: What drives you? What inspires you? What moves you? Throughout the year, Today’s Veterinary Nurse will be publishing veterinary technicians’ answers to these questions.

What moves you? Do you have a story you’d like to share? Send it to us at [email protected]. Submissions should be approximately 500 words or less and may be posted on our website or edited for publication in the journal.

Tell us your story!

In May 2016, Leonard Marino received an associate’s degree in veterinary science technology from Suffolk County Community College on Long Island. This qualified him to work as a veterinary technician and as the editor of the hospital’s newsletter at Long Island Veterinary Specialists (LIVS) in Plainview, New York. Marino’s story, however has a unique twist. He is not only a retired pediatrician but is as industrious and persistent as ever at the age of 84. Here he shares why a new career late in life was exactly what he wanted. 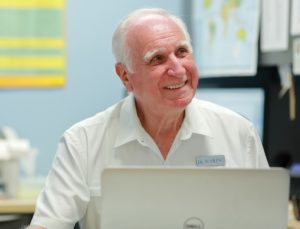 What inspired you to make the transition from human to animal medicine?

As a pediatrician, I enjoyed the “hands-on” parts of pediatrics—suturing, spinal taps, cutdowns, starting IVs, and so forth. Activities such as being present at emergency C-sections and performing intubations—as well as exchange transfusions, when indicated—were also exciting parts of my former profession. After I “slowed down” owing to my wife’s stroke, my son asked if I would assist him in unique surgical procedures at the animal hospital where he worked, especially performing total hip replacements on dogs. I said yes!

Two pair of hands are useful in draping, opening instrument packs, holding retractors, mixing cement, etc, during surgery. In human medicine, a surgeon has a circulating or surgical nurse to help prepare the incision site and hand over instruments, among other things. I wanted to help my son because I love this part of medicine, and that’s when I decided I wanted to have the education to be even better at it.

In your opinion, what are the major differences between human and animal medicine, especially in regard to being a veterinary technician?

There are so many things that are different between human and animal medicine. In human medicine, you’re covering, well, humans! In veterinary medicine, you’re covering a variety of different species. At LIVS, in addition to dogs and cats, we’ve treated turtles, goats, birds, potbelly pigs, snakes, and even a kangaroo! And the differences aren’t just in anatomy. For instance, medications that work for dogs don’t always work the same for cats, and vice versa.

My ideas about veterinary medicine have changed noticeably, especially about the veterinary technician profession. You would think a vet tech is akin to a registered nurse, but human nurses generally don’t do radiography and ultrasonography. They also don’t regularly perform electrocardiography or monitor anesthesia without special training, and human nurses never perform dental prophylaxis. That’s handled by another profession altogether, but veterinary technicians often do all of that and much more.

Did you learn any skills as a veterinary technician that you didn’t already have as a pediatrician?

Well, my experience in pediatrics is of another era—I retired in the 1990s, and lots of techniques that are standard now were unknown then. However, I had to learn how to insert an IV through furry skin, which I never had to do for infants or children! I also learned to use sonography to find organs for specimen collection (urinary bladder) and Doppler to get systolic blood pressure readings. The process of anesthetizing an animal for any procedure is entirely new to me. 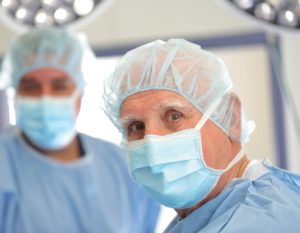 Did the “youngsters” in the college program embrace you?

I was older than many of my fellow classmates’ grandparents, but that meant I could tell them about early antibiotics—that’s just penicillin, sulfa, and streptomycin—as well as stories about my college president, Dwight Eisenhower, who then became the President of the United States. The other students loved my tales!

What’s the reward for you?

The major perk is that I get to talk to my son during his busy day (see Like Father, Like Son). The practice where we work is a referral hospital, and in addition to performing a variety of special procedures, the staff teaches classes for the care of traumatic injuries to dogs belonging to the Department of Defense, Homeland Security, and other K-9 units. It’s an incredible place to work. Also, I edit the “LIVS in Plain View” veterinary newsletter, which covers a variety of subjects, including pain management, diagnostics, behavior therapy, rehabilitation, oncology, ophthalmology, and much more. My veterinary education only enhances this role.

Speaking of family connections, are there any notable differences between “pet parents” and human parents?

There is considerable overlap in concern for 2- and 4-legged “children.” The main difference I have seen is that pet owners have the heart-rending choice of compassionate euthanasia. Of note is that the term often used is “humane euthanasia“ when applied to animals!

Another difference is in office communication. In my pediatrics experience, phone calls from and to parents often exceeded 100 per day, whereas pet owners are asked to call in at specified times to speak to veterinarians about admitted pets. Of course, emergency messages are always accepted at all hours.

Where do you see the veterinary technician profession going?

A more informed public means more pets get to the veterinary clinic because owners seek better care. This leads to more preventive medicine such as heartworm prevention and vaccines for diseases like canine distemper, parvovirus, hepatitis, rabies, feline panleukopenia, and rhinotracheitis. The bottom line is that more vet techs will be needed.

What would you say to people considering a career in animal medicine, especially those who already have worked in another career field?

Go for it, as long as you love animals and have little fear of fractious cats and hard-to-manage exotics! Or maybe you want to work outdoors in a large animal practice. There are so many opportunities in this field. 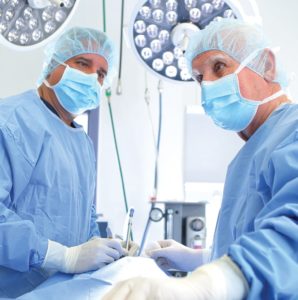 “I’M THE LUCKIEST GUY IN THE WORLD to be able to work with my pop, teach him a few things, and still be able to learn from him!” —Dominic J. Marino

We asked Dr. Marino’s son to weigh in on what his father’s career change meant to him. Dominic J. Marino, DVM, DACVS, DACCT, CCRP, is chief of staff at Long Island Veterinary Specialists, where his father now works alongside him.

What was your reaction to your father making this switch of fields?
I wasn’t surprised. He had been working at our specialty center for years helping with various research and administrative projects and always said, “I could be of more help if I understood the veterinary portion better.” Well, that was the start of his pursuit to learn more. At 80 years old and working full time with me, he enrolled in night school, and 4 years later, he got his degree in veterinary technology. He is now an MD and an LVT.

What is it like to work alongside him?
My dad has always been a teacher. Every “home project” we did together when I was a kid was an adventure in learning, and the same is true now. He loves to problem solve and so do I. I’m the luckiest guy in the world to be able to work with my pop, teach him a few things, and still be able to learn from him!

Getting Your Life Unstuck