When to perform ear cytology, how to collect and stain samples, and some of the common findings veterinary nurses encounter in dogs and cats.

Barbie teaches clinical pathology and laboratory animal courses in the veterinary technology program at Murray State University and is a continuing education instructor for the Veterinary Support Personnel Network. Before full-time teaching, she worked at the Breathitt Veterinary Center diagnostic laboratory. She currently serves as secretary of the Academy of Veterinary Clinical Pathology Technicians and the Kentucky Veterinary Technician Association. She resides in western Kentucky, near Land Between the Lakes, where she loves to hike with her 2 sons and husband. She shares her home with 3 dogs, 4 cats, and an assortment of feathered and scaled animals.

WHEN TO PERFORM EAR CYTOLOGY

Evaluation of clinical signs related to otitis externa (Box 1) is one of the most common reasons animals present to the clinic.2 Ear cytology is a simple, quick, routine procedure that can be used to rule out or identify microbial otic infection in any animal that presents with these signs.3 With antimicrobial resistance on the rise, selective treatment options are critical in combating infectious organisms. A skilled veterinary nurse can enhance the veterinarian’s diagnosis by performing ear cytology and correctly identifying microorganisms by group. This, in turn, helps guide the veterinarian’s choice of the most effective therapy or further tests, such as culture and sensitivity.3,4 Ear cytology is also an invaluable tool in monitoring therapy, with rechecks performed weekly or biweekly as treatment progresses until there is no evidence of infection on cytology samples.2,3

Secondary factors include opportunistic bacteria and yeast overgrowth, most commonly by Malassezia pachydermatis. These organisms are often detected by ear sampling and culture and sensitivity.2-5

Specimens from the external ear canal are collected during physical examination and otoscopic examination of the ear. Ideally, samples are collected before the addition of any aural cleansers or medications.2-5 In some cases of otitis media with intact tympanic membranes, a skilled veterinarian may perform a myringotomy to collect a culture for bacterial analysis.5,6 Supplies needed for sample collection and analysis are listed in Box 2.

An otoscope is used to examine the ear to note physical characteristics such as exudate accumulation, presence of mites or ticks, and the condition of the tympanic membrane (intact or ruptured).

Each ear is sampled with a separate swab to determine if infections are bilateral or unilateral.3,4 A dry swab is inserted into the ear deep enough to reach the junction between the horizontal and vertical ear canals and rotated several times (Figure 1).3 Samples are more diagnostic if taken from the horizontal ear canal; however, take care not to pull the ear. Pulling the ear straightens it, allowing iatrogenic damage to the tympanic membrane during the collection process.3,6 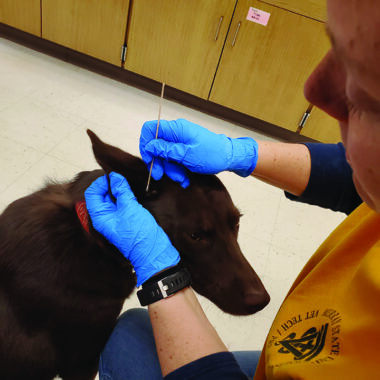 Figure 1. A clean swab is inserted into the vertical ear canal to the junction with the horizontal ear canal and gently rotated to collect material.

If otitis media is present, the animal’s ears may be too painful for collection without sedation. In general, the deeper an infection goes, the more painful it is.6 If the tympanic membrane has ruptured, a sterile sample from the middle ear may be needed to compare against samples from the horizontal ear canal on culture.2

The swabs are gently rolled on a clean slide, with complete revolutions of the swab tip (Figure 2).4 Material must not be painted on the slide, but gently transferred during the rolling process. If swabs are allowed to slide or pressed too hard, any cells present are more likely to rupture, making their identification and the detection of any bacteriophagy difficult. 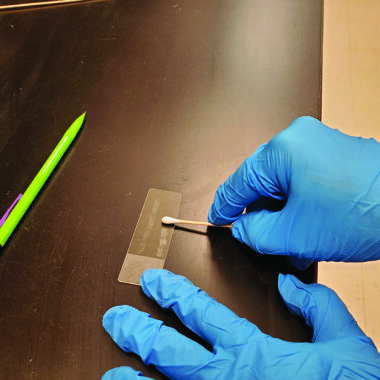 Figure 2. Collected material is gently rolled onto a slide, using complete revolutions of the swab to transfer material. “Painting” a slide causes cell rupture, and areas will be too thick to evaluate.

The author prefers to start with the right ear and roll the swab in a single line across the top of the slide, beginning at the side next to the frosted edge. The left ear is sampled in the same manner with a clean swab and rolled in a single line across the same slide below the first line. Placing the exudate in one line on the slide allows for more thorough evaluation by limiting the stage movement necessary to evaluate the entire sample thoroughly and ensures a thin area of evaluation for easier cellular and microorganism identification. Lines are labeled using “L” for left and “R” for right. Patient name, owner information, and date are also added to the label.

Samples are allowed to air dry before staining with quick stains according to the stain manufacturer’s instructions. Fixation of cells to the slide by heat is unnecessary.3,4,7 Using methanol as a fixative is sufficient to fix any microorganisms to the slide before staining. Unnecessary heat causes dehydration of cells and may impede their identification and microorganisms within them.

Once slides are stained and air dried, they are carefully scanned under the 40× objective for cells and larger structures. Bacteria are further evaluated using the 100× objective.3

If mites are suspected, a second swab with mineral oil applied is used to collect exudate. This material is mixed into a drop of mineral oil on a separate slide. Mite evaluation slides are not stained. Instead, the slide is cover-slipped and examined under the 10× objective for the presence of mites or mite ova.3 The most common mites observed in ear samples are O. cynotis in dogs, cats, and ferrets and P. cuniculi in rabbits and goats (Figure 3).2 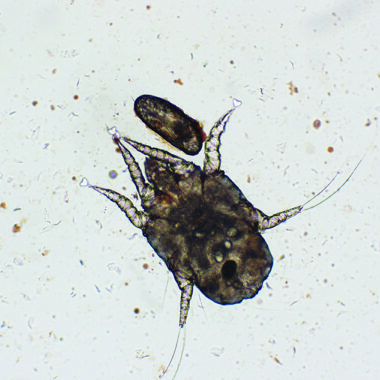 Figure 3. Adult mite and ovum of Otodectes cynotis found on an ear mite swab from a cat. Mineral oil added to the swab helps collect and trap mites for evaluation. 100× magnification, unstained.

A deep skin scraping of the pinna may be necessary to recover other suspected mites such as Demodex species, S. scabiei, or N. cati. The pinna is pinched, scraped with a scalpel blade coated with mineral oil, released, pinched again, and scraped until capillary blood oozes from the site. This material is mixed with a drop of mineral oil on a slide, cover-slipped, and examined under the 10× objective for mites and/or mite ova.7

Bacteria in ear cytology samples are often described based on morphology (rods versus cocci) and arrangement (e.g., clusters, pairs, chains, tetrads).3 Bacterial numbers may be reported as average number per 40× objective; as occasional, mild, moderate, or marked; or by using a scale of 1+, 2+, 3+, etc. to denote increasing numbers. These classifications may depend on patient species. For example, in dogs, an average of >25 bacteria per 40× field may be reported as “marked;” in cats, a “marked” number may be >15 bacteria per 40× field.3

An alternative reporting scheme grades ear cytology samples based on the presence of bacteria, yeast, and inflammatory cells by semi-quantitative methods:8

0 — No bacteria, yeast, or inflammatory cells are observed.

1 — Occasional bacteria, yeast, or inflammatory cells are present but only found through careful screening.

2 — Low numbers of bacteria, yeast, or inflammatory cells are present and easily found without difficulty.

3 — Larger numbers of bacteria, yeast, or inflammatory cells are present and easily found without difficulty.

4 — Massive amounts of bacteria, yeast, or inflammatory cells are present and easily found without difficulty.

Specific reporting schemes should be documented in standard operating procedures developed by each clinic. These criteria must be consistent for reporting numbers of microorganisms found in cytology samples so that each slide is evaluated similarly.

With common quick stains used for hematology and cytology, bacteria stain dark purple (Figures 4 and 5).9 Gram staining can be used to definitively identify gram-positive and gram-negative bacteria.3 Cocci are usually gram positive. Staphylococcus species are most common, although Streptococcus and Enterococcus species may also be found in ear cultures.2-5 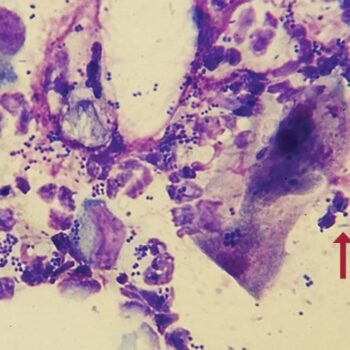 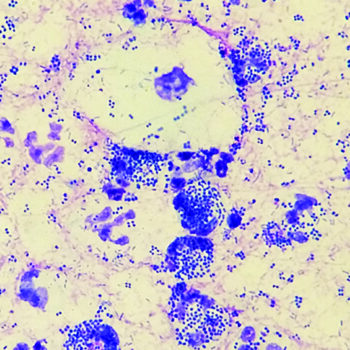 Bacterial rods are most likely gram negative, and their presence in canine or feline ear cytology samples is considered abnormal, signaling the need for culture and sensitivity testing (Figure 4).3,5,6,9 Pseudomonas aeruginosa is the most common rod-shaped bacteria found during ear cytology, with Proteus mirabilis and coliform bacteria such as Escherichia coli occasionally cultured.2,4-6,9 Pseudomonas species produce endotoxins and are surrounded by a glycolipid matrix that protects against the animal’s immune system and topical antimicrobials.6

Less common fungi found in ear cytology samples include Candida and Microsporum species.3 Fungal culture is used to further identify any yeast or hyphae that cannot readily be identified microscopically.3

Inflammatory cells include neutrophils and macrophages, neither of which is typically present in healthy ears.3 Neutrophils are described as nondegenerate or degenerate. Nondegenerate neutrophils have the typical morphology of a mature segmented neutrophil found in peripheral blood.10 Degenerate neutrophils indicate that neutrophils have been damaged by their environment, most often by endotoxin-producing bacteria.10 Degenerate neutrophils resemble large band cells due to an inability to control water homeostasis.10 These cells swell, especially nuclei, and their cytoplasm may appear foamy or vacuolated.10 Most neutrophils found in ear cytology slides are degenerate and associated with Pseudomonas infections.6,9 If macrophages are present, it is important to examine them closely for bacteriophagy, which may indicate pathogenicity of any bacteria present.3 Inflammatory cells are often accompanied by the presence of proteinaceous material, which appears as a pale pink to purple in the background of the slide (Figures 4 and 5).5

Neoplastic cells can develop within the ear canal as they do in skin samples.3 Additional samples may be taken by fine-needle aspiration, laser biopsy, or skin scraping to identify specific cells. Polyps may be removed by traction for histologic identification.5 These samples are often evaluated by pathologists at specialty clinics or reference laboratories to determine whether hyperplasia, adenoma, or adenosarcoma is present.3 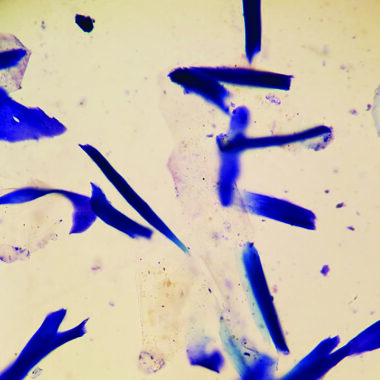 Melanin may be confused with bacteria and is a common finding on ear cytology slides. It appears golden-yellow to brown on Romanowsky stains, whereas bacteria appear dark purple. Melanin granules are randomly arranged within cells, as opposed to bacteria, which are more organized. Melanin granules also appear highly refractive as the microscope focus is adjusted.9

Cerumen is a fat-laden exudate secreted by ceruminous glands of the external ear canal and is a common finding in ear cytology samples.3 Because of its high fatty content, it resists staining and appears as a brownish material in stained ear cytology slides.3

Ear sampling and cytologic evaluation is a rapid, inexpensive test that a skilled veterinary nurse can perform in house to identify parasites, cocci and rod bacteria, inflammatory cells, and yeast organisms, which are common in otitis externa. This evaluation process is invaluable in guiding the veterinarian in his or her initial choice of treatment and ongoing evaluation of treatment effectiveness. As the point person for client education, the veterinary nurse must relay the importance of initial and follow-up ear cytology testing to pet owners to facilitate their acceptance and compliance. It is also another way veterinary nurses can use their skills to add value to the role they play in patient health and practice productivity.

A Light in the Storm