A Technician’s Role in the Treatment of Demodex Patients

Demodicosis is a common disease in small animal veterinary practice with a variety of diagnostic and therapeutic options.

Missy graduated from the Veterinary Technology program at Portland Community College in Portland, Oregon, and worked in small animal general practice until finding a fulfilling career working at a private dermatology practice in 2000. Since 2006, she has been the dermatology technician at the Auburn University College of Veterinary Medicine. Missy is one of 8 technicians recognized as an Organizing Committee Member of the Academy of Dermatology Veterinary Technicians, which was recognized by NAVTA in 2015.

First described in 1842 by Gustav Simon, a French dermatologist, Demodex mites are normal skin inhabitants of many mammals, and >140 species of Demodex have been identified (2 in humans, 3 in dogs).1 The mites live in hair follicles as well as the sebaceous glands and ducts and feed off of sebum, cells, and debris from the epidermis.2,3 In dogs, the mites are passed from the bitch to her puppies through close contact while nursing. Transfer of mites is noted on the pups as early as 16 hours4 but usually takes place within the first 2 to 3 days after birth.2,3 Puppies born via cesarian section that have no contact with their mother to nurse will not have Demodex mites.2,4

Although Demodex are considered normal fauna of the skin, collecting samples to assess their presence does not usually yield any mites. Thus, when mites are noted on diagnostic samples, the patient is considered to have a degree of demodicosis.2,4 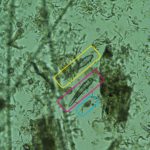 From egg to adult, the Demodex life cycle takes 20 to 35 days.2 Mites have three body sections: (1) the gnathosoma (jaws or cranial portion), (2) the podosoma (legs or middle portion), and (3) the opisthosoma (tail or caudal portion).4 The penis and vulva are hidden within the legs. 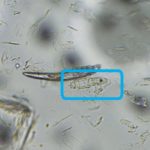 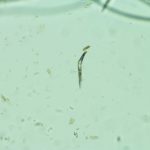 Three species of Demodex mites have been identified in dogs. Demodex canis is the most common. In the 1990s, a mite later named Demodex injai (FIGURE 3) was noted to have a longer tail than D. canis. D. injai is commonly found in terrier breeds, but usually in low numbers. The mites cause a greasy dermatitis (seborrhea oleosa) along the dorsum over the spine2 and have also been associated with intense facial pruritus (itch).4 Because it is caused by relatively few mites, folliculitis secondary to D. injai demodicosis may be subtle in presentation, making a diagnosis based on clinical observation more difficult. A third mite, unofficially named Demodex cornei, was first described in dogs in the 1980s and seems to be a morphologic variant of D. canis. D. cornei has a shorter tail than D. canis; it is approximately one-half to one-third the length of the opisthosoma section.2 Additionally, this mite favors living in the more superficial structures of the stratum corneum of the skin. Different species may be found on the same patient concurrently2–4 (FIGURE 4). 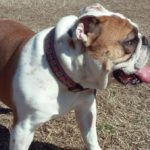 FIGURE 5. English bulldogs may exhibit a breed predisposition for demodicosis.

Some breed predilections exist for demodicosis. Short-coated breeds such as English bulldogs (FIGURE 5), Staffordshire terriers, and Boston terriers, along with longer-coated breeds such as shih tzus, West Highland White terriers, and Scottish terriers, seem to be predisposed.2,4 In Chinese Shar-Peis, skin thickness may make finding the mites on a deep skin scraping difficult, and diagnosis may require obtaining skin biopsy samples for histopathology (see DIAGNOSIS).2,4,5 Additional predisposing factors are listed in BOX 1. Iatrogenic administration of glucocorticoids and subsequent suppression of the immune system has great potential as an influencing factor in demodicosis.

Demodex infections in dogs are classified as either juvenile onset (dogs younger than 18 months) or adult onset (dogs older than 4 years)2 and are further categorized as localized or generalized. For patients between 18 months and 4 years old, a thorough dermatologic history is necessary to determine which category of demodicosis is more likely in this age range. While dogs that recover fully from juvenile demodicosis may live healthy lives with no recurrence of infection, it is possible that such dogs have a chronic predisposition to demodicosis even into adulthood. The reason for this is not fully understood, but abnormalities in cell-mediated immunity are postulated.1 Gathering a detailed history is also important for categorizing the type of demodicosis (i.e., juvenile versus adult onset). To date, D. injai have been noted only in adult-onset disease.3

Categorizing demodicosis as localized versus generalized depends on the number and/or location of body sites affected. Localized demodicosis is defined as 1 to 5 sites affected that usually include the face (particularly the periorbital region and lip/muzzle), forelimbs, or ears (otitis externa); however, any site on the animal can be affected. Localized demodicosis commonly develops between 3 and 6 months of age and generally resolves without treatment in 6 to 8 weeks.2,4 Dogs with a history of localized demodicosis may be predisposed to develop demodicosis later in life, particularly immunocompromised animals.3 Generalized demodicosis may begin as many small, localized lesions that progress to cover a large body area. When evidence of Demodex is detected in 6 or more focal lesions, completely involves 2 or more paws, or involves an entire body region (such as the face), the infection is categorized as generalized.2 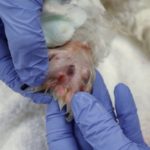 Demodicosis is one of 3 differentials to consider when areas of folliculitis (inflammation of the hair follicle) are observed on the skin; the others are bacterial and dermatophyte infections. Lesions associated with folliculitis are listed in BOX 2. 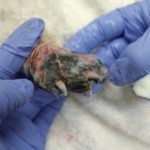 After obtaining a thorough dermatologic and medical history, including exposure to immunosuppressive medications, particularly steroids, a dermatologic database of cytology, deep skin scraping (or alternative collection method), and dermatophyte culture should be completed to rule in/out folliculitis differentials. These diagnostic tests can be performed in the veterinary clinic setting—often by veterinary technicians under the direction of a veterinarian. Demodex infection, particularly adult-onset demodicosis, is usually accompanied by pyoderma, making cytology and deep skin scraping necessary in most patients. It is important to remember that dermatophyte exposure is common in young animals because of their living situations (e.g., puppy mill, pet store, shelter) and in immunocompromised adult dogs. This reinforces the importance of always considering the possibility of the triad of folliculitis infections (bacteria, Demodex, dermatophyte) in some at-risk patients (FIGURE 7).

When determining whether Demodex mites are present, a deep skin scraping is typically performed. Several areas (4 to 6 sites) should be sampled in patients with generalized demodicosis; in patients with localized demodicosis, samples should be collected from each lesion. These areas should be re-scraped at subsequent visits to assess response to therapy. Details about the sampled areas need to be documented (clearly identified and quantified) in the medical record.

To avoid transfer of bloodborne disease or pathogens between patients, a new or autoclaved #10 scalpel blade should be used to perform skin scraping in each patient. The blade may be dulled before scraping the animal by running the cutting edge across a metal surface such as a stainless steel examination table. Alternatively, a skin scraping spatula may be used. The advantage to using a spatula is that, when performing a deep scraping, it is not so sharp that it will potentially cut the patient.6 A glass microscope slide is prepared by applying a heavy drop of mineral oil, and the blade or spatula is dipped in the oil before scraping the patient. This eases the friction between the blade and skin during the sampling process and promotes collecting and trapping the material to be evaluated. 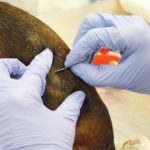 FIGURE 8. Deep scrape being performed on a patient with a #10 scalpel blade.

Skin scraping is then performed in the following steps: 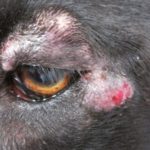 FIGURE 9. The periocular region may be an area where a trichogram or the acetate tape/squeeze technique is preferable to a skin scrape because of its proximity to the eye.

A trichogram can be used to evaluate regions that may be too painful or too risky to scrape without chemical restraint. This includes areas near the eye (FIGURE 9), the mouth, the feet of small breeds, and over the thin skin of the axilla and abdomen.2,4,5 Samples are collected by grasping the hair with hemostats and quickly plucking the hair in the direction of hair growth. They are then placed in mineral oil on a glass slide and a cover slip applied. This method may not be as sensitive as a deep skin scraping but is still informative and can confirm a diagnosis.

This technique involves using a piece of clear acetate tape that is slightly shorter in length than a glass microscope slide. The tape is firmly applied to the selected area of skin to be sampled. The skin under the tape is then pinched or squeezed (using fingers) to extrude the mites from the hair follicles; the mites will stick to the tape. The tape is then placed on a glass microscope slide to be evaluated by microscopy.6,7

For a pet with localized demodicosis of the ear, the mites may be seen when an ear swab is rolled in mineral oil on the slide and the collected material covered with a cover slip, just as is seen with Otodectes cytology preps. Secondary otitis externa complicated with Malassezia and/or bacteria is common, and a separate stained slide should be prepared. 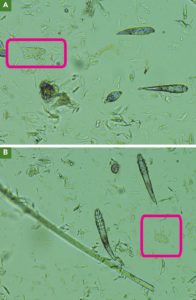 FIGURE 10. Dead Demodex mites (red boxes; 10× magnification) may be more difficult to find during microscopy because they lose contrast with intense light and do not refract. Lower the microscope condenser to minimize overlooking the skeletons.

Demodex mites are readily visualized under the microscope using the 4× objective lens; however, the 10× lens is recommended to enhance ease of detection of both mites and eggs. As when reading a fecal sample, the light condenser should be lowered and the light intensity reduced to enhance contrast between mites and skin debris. Skeletons of dead mites do not refract intense light as well as live mites (FIGURE 10), and this can lead to a false-negative interpretation that may result in premature cessation of treatment and recurrence of disease.2,4

When Demodex mites are observed, the quantity of each life stage should be documented. For example, results of a skin scraping may be reported to the veterinarian as 8 dead adults, 4 live adults, 2 nymphs, 1 larva, and 1 egg. This is necessary to assess response to the chosen treatment, which is continued over several weeks to months before the dog is deemed cured. If juvenile stages of the Demodex mite are recognized after previous scrapings had revealed only dead adults, a further exploration of the patient’s history is needed. Perhaps a young dog has outgrown the therapeutic dosing range of the chosen treatment, an owner has discontinued the medication because of the improvement noted, or a concurrent disease process is allowing the relapse. It is important to remember that a clinical cure (how the dog’s skin appears) is noted before the actual or microscopic cure.2 Veterinary technicians may need to remind owners about the importance of continuing therapy to prevent a relapse, even if their dog appears “cured.” 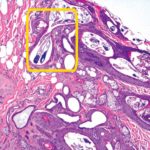 In some cases, skin inflammation is severe enough to impede diagnosis via deep skin scraping techniques. These patients include dogs with nodular pododemodicosis and Shar-Peis with excessive mucin within the dermis. For these animals, diagnosis via biopsy and histopathology is required. A 6- or 8-mm punch biopsy tool is used to collect multiple samples of affected skin. Mites are readily identified within the hair follicles on histopathologic evaluation2–4 (FIGURE 11).

Several treatment options are available for demodicosis. Young puppies with localized disease may receive no treatment at all, as these infections are expected to spontaneously resolve as the puppy grows and its immune system matures. Most cases, however, do require treatment, and many medications are available to kill the mites. Miticidal therapy is continued 4 weeks beyond obtaining negative results of at least 2 scrapings performed 3 to 4 weeks apart.3,8 Demodicosis may relapse for several reasons, including exposure to immunosuppressive medications, estrus/parturition, or concurrent diseases. If folliculitis lesions recur, the first step is to repeat a deep skin scrape. A patient is declared cured from the current infection if there is no relapse of demodicosis for more than 12 months after miticidal therapy is discontinued.2

Roles of the Veterinary Technician

Gratitude and Giving Back — One Veterinary Tech’s Story