Bonnie is an RVT in the anesthesia department at the University of Georgia. After graduating from Tri-County Technical College in 2014, she completed a large animal rotating internship at the University of Tennessee. Over the past 5 years in academia, she has found great fulfillment in the challenge of taking each case as a puzzle to be solved by providing balanced anesthetic protocols, addressing complications, troubleshooting anesthetic equipment, and triaging emergency cases. Bonnie is currently pursuing VTS certification in anesthesia and analgesia. She resides in Athens, Georgia, with her husband and their 3 dogs.

Ava was a 66-lb (30-kg) intact female German shepherd dog, 2 years and 8 months of age. She was brought to the University of Georgia soft tissue service for surgical correction of a PDA and for laparoscopy-assisted ovariectomy and gastropexy. Her medical record noted a previous episode of mange that had been resolved. Ava was up to date on vaccinations as well as on heartworm and flea and tick preventives.

Physical examination revealed a rectal temperature of 101.4°F (38.3°C), pulse of 80 beats/min, respiratory rate of 40 breaths/min, and a Doppler systolic blood pressure of 145 mm Hg (resulting from stress and excitement). Her body condition score was 4/9. Cardiothoracic auscultation revealed a grade V/VI continuous heart murmur over the left heart base.

An echocardiogram showed a left-to-right shunting PDA with characteristic continuous turbulent flow in the main pulmonary artery, left atrial enlargement, and possible aortic stenosis. Given the echocardiographic appearance of the ductus arteriosus (i.e., lack of distinct ostial “waist”), correction by surgical ligation was recommended in lieu of a catheter-based procedure. A complete blood count showed thrombocytopenia with a platelet count of 204 × 103 cells/µL (reference range 235 to 694 × 103 cells/µL). Biochemical analysis of serum showed mild hypoalbuminemia with an albumin level of 4.0 g/dL (reference range 2.2 to 3.9 g/dL). All other values were within normal limits. Ava was sent home with pimobendan (10 mg PO q12h) and furosemide (20 mg PO q24h), and surgery was scheduled for the following week.

Ava was premedicated with hydromorphone (0.1 mg/kg IM) and midazolam (0.2 mg/kg IM) and then pre-oxygenated through a face mask (FIGURE 1). After placing an 18-gauge cephalic vein catheter, we induced anesthesia with diazepam (0.2 mg/kg IV) and etomidate (1 mg/kg IV). After orotracheal intubation, we used a circle system to administer isoflurane at 1.5% with an oxygen flow rate of 1 L/min. To prevent fluid overload and potential heart failure, we administered the maintenance fluids (lactated Ringer’s solution) at 3 mL/kg/hr IV (canine fluid therapy guidelines suggest 5 mL/kg/hr). We gave a loading dose of 2% lidocaine at 2 mg/kg IV and started a constant rate infusion (CRI) at 3 mg/kg/hr IV. A 22-gauge catheter was placed in the right dorsal pedal artery for invasive blood pressure monitoring. 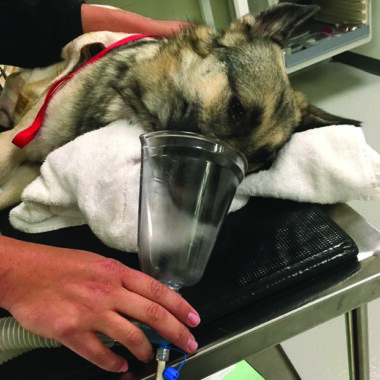 Figure 1. Pre-oxygenation of the patient before induction of anesthesia.

Shortly after anesthesia induction, Ava became hypotensive, with a systolic pressure of 120 mm Hg, mean arterial pressure of 62 mm Hg, and diastolic pressure of 35 mm Hg. Because of Ava’s light anesthetic depth, the isoflurane concentration could not be reduced below 1.25%; therefore, we started a dopamine CRI at 5 μg/kg/min IV.

In the operating room, we monitored Ava by using electrocardiography (ECG), pulse oximetry, an esophageal temperature probe, side stream capnography, a gas analyzer, and direct blood pressure measurement. When the surgical team opened the thoracic cavity, Ava became hypertensive in response to pain; her blood pressure was 172/55 mm Hg and her mean arterial pressure was 95 mm Hg. The dopamine CRI was discontinued and a loading dose of fentanyl at 3 μg/kg IV was given, followed by a CRI of fentanyl at 5 μg/kg/hr IV. These drugs provided adequate analgesia and Ava became normotensive.

Because the surgical team observed an aberrant left cranial vena cava that was obstructing a clear view of the PDA (FIGURE 2), additional dissection was required. For multimodal analgesia, Ava was given an intercostal nerve block with 0.5 mg/kg of bupivacaine. 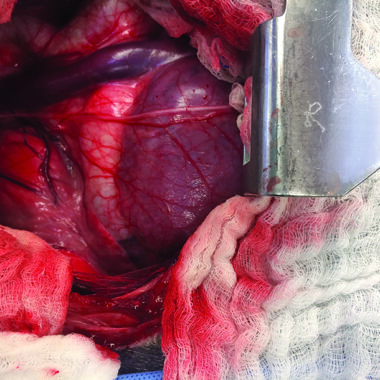 Figure 2. The patient in right lateral recumbency with the aberrant left cranial vena cava visible after surgical entry into the thorax.

Ten minutes after the fentanyl administration, Ava became acutely bradycardic; her heart rate dropped from 80 beats/min to <30 beats/min. At this time, atrial fibrillation was also noted on the ECG, characterized by rapid unorganized waves with an irregular ventricular response rate (FIGURE 3). When the heart rate did not improve after we gave atropine at 0.02 mg/kg IV, we restarted the dopamine CRI at 5 μg/kg/min IV. When the heart rate still did not improve, we increased the dopamine CRI to 10 μg/kg/min IV, to which Ava immediately responded with a heart rate increase to 112 beats/min. 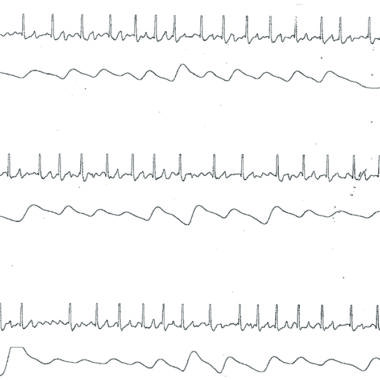 After Ava’s heart rate and blood pressure were back within normal limits, we discontinued the dopamine CRI but the atrial fibrillation persisted. The surgeon continued the PDA ligation while the cardiology service was consulted. To correct the atrial fibrillation, they advised us to administer 2 mg/kg of lidocaine IV. This dose was unsuccessful; therefore, we administered a second 2 mg/kg bolus of lidocaine IV. Because Ava’s heart rate and blood pressure remained within normal limits, we decided to continue to monitor the atrial fibrillation and address it further after the PDA ligation had been completed. The fentanyl CRI was adjusted as needed for appropriate analgesia, between 5 and 10 μg/kg/hr IV. During thoracic cavity closure, 30 minutes after PDA ligation with no observation of a Branham reflex (drop in heart rate and rise in aortic pressure sometimes seen after ligation of the ductus), Ava’s heart spontaneously returned to a normal sinus rhythm (FIGURE 4). She remained anesthetically stable, which enabled the surgeon to complete the laparoscopic ovariectomy and gastropexy.

When general anesthesia was no longer needed, the isoflurane and lidocaine CRI were discontinued. While being monitored by ECG, Ava continued to receive a CRI of fentanyl at 2 μg/kg/hr IV and was given 100% oxygen via endotracheal tube for 10 minutes. When her active palpebral and swallowing reflexes returned, Ava was extubated. A postoperative physical examination revealed a temperature of 98.1°F (36.7°C), pulse of 120 beats/min, and respiratory rate of 24 breaths/min. Her recovery was quiet and smooth. Ava’s heart remained in normal sinus rhythm, and she was transferred to our intensive care unit and monitored by telemetry. At discharge 2 days later, Ava continued to have a normal sinus rhythm. A postoperative ECG showed no residual blood flow through the ligated PDA.

Atrial fibrillation can be treated in 2 ways: rhythm control or rate control. Rhythm control involves conversion to sinus rhythm, which can be achieved with use of antiarrhythmics such as quinidine (usually for equine patients) or lidocaine. It can also be achieved by using synchronized electrical cardioversion, typically reserved for horses or dogs with lone atrial fibrillation (i.e., atrial fibrillation in the absence of underlying heart disease), or by transvenous catheter ablation. Rate control treatments reduce the ventricular rate response through administration of β-adrenergic blockers, calcium-channel blockers, or digoxin.

Because atrial fibrillation is not typically a bradyarrhythmia, the acute bradycardia with simultaneous atrial fibrillation in Ava’s case is unusual. The traditional treatment for acute bradycardia is administration of an anticholinergic such as atropine at 0.02 to 0.04 mg/kg IV. However, because of Ava’s continued bradycardia despite the anticholinergic, we used a dopamine CRI to increase cardiac contractility and heart rate via activation of β-1 receptors. After consultation with the cardiology department, we chose lidocaine (a class I antiarrhythmic drug with vagolytic effects) as a safe treatment. Lidocaine can slow the atrial activation frequency and decrease the atrial disorganization associated with fibrillation. Several studies have reported use of lidocaine to treat vagally mediated atrial fibrillation.4,5 However, this treatment was unsuccessful for Ava. Because Ava’s heart rate and blood pressure were within normal ranges, we did not think that a rate control treatment plan was necessary. We discussed possible use of the rhythm control treatment of synchronized cardioversion but considered it not ideal because the thorax was open and the PDA ligation needed to be addressed first. When Ava’s heart spontaneously returned to a normal sinus rhythm, we decided that additional ECG monitoring and no further treatment were required.

Anesthetic drugs used during general anesthesia, such as opioids, increase vagal tone by altering synaptic neurotransmission to cardiac vagal nerves through inhibition of γ-aminobutyric acid.4 Because the acute bradycardia with atrial fibrillation occurred shortly after the administration of fentanyl, it is not unreasonable to believe that the fentanyl loading dose and CRI could have contributed to the onset of atrial fibrillation. Another observation is that the arrhythmia began during surgical dissection of the PDA and resolved spontaneously during closure of the thoracic wall, leading to the question of whether the atrial fibrillation had a surgical component as well. In addition, Ava had enlarged atria, which encouraged the initiation and maintenance of atrial fibrillation.

Those involved with Ava’s case are of the opinion that a combination of these factors resulted in a vagally mediated atrial fibrillation. Although it remains unclear why her atrial fibrillation resolved at thoracic closure, this case allowed for a team-oriented patient management strategy involving the anesthesia, soft tissue, cardiology, and emergency critical care services to provide the best patient care.