A Splintering Situation: A Case of Wooden Chest Syndrome in a Dog

Little is known about chest wall rigidity, or “wooden chest syndrome,” in veterinary patients and it can prove to be fatal without expert intervention.

Kayla King is a registered veterinary technician in anesthesia at the University of Georgia Veterinary Teaching Hospital. She graduated from Athens Technical College in 2013 and has been working in academia since, managing a wide variety of species. She received her VTS in anesthesia and analgesia in 2021 and finds anesthesia fascinating, as it is always a challenge to determine the optimal protocol for each patient. Anesthetizing critical patients is particularly mentally stimulating since it gives her the opportunity to test her knowledge and problem-solving skills. Kayla resides in Winterville, Georgia, with her husband, son, dog, cat, and chinchilla.

This case report describes the rare adverse effect of increased chest wall rigidity, or “wooden chest syndrome,” caused by fentanyl in a 9-year-old dog undergoing fluoroscopy-guided correction of patent ductus arteriosus. Key takeaways include insight on a disorder rarely described in companion animals, the importance of collaboration among the healthcare team, and strategies for adjusting anesthesia and analgesia when abnormalities arise during a procedure.

Gigi—a 2.9-kg (6.4 lb), 9-year-old female intact miniature poodle—was admitted to the University of Georgia emergency and critical care service for coughing and respiratory distress. She was hospitalized on 40% oxygen and administered furosemide and butorphanol to manage her clinical signs.

Gigi was quiet, alert, and responsive. She had bounding, synchronous femoral pulses with a rate of 104 beats per minute (bpm). Cardiothoracic auscultation revealed a V/VI left basilar continuous murmur with a regular cardiac rhythm. Lung sounds were harsh and respiratory effort was increased with a rate of 48 breaths per minute. No jugular venous distention or pulsation was noted. Rectal temperature was 103.5 °F (39.7 °C).

A PDA with secondary cardiac structural changes and CHF was diagnosed. Gigi was discharged from the hospital on furosemide and pimobendan and was scheduled for a fluoroscopy-guided PDA correction.

To correct the PDA, Gigi received hydromorphone (0.1 mg/kg) and alfaxalone (2 mg/kg) administered IV and flow-by oxygen delivered via a face mask on the day of surgery. A Doppler probe was placed on the metacarpal artery and electrocardiography (ECG) was used to monitor pulse rate and cardiac rhythm. Induction was achieved with alfaxalone (0.7 mg/kg IV) and lidocaine (2 mg/kg IV). After orotracheal intubation, oxygen was administered at 1 L/min and a pulse oximeter probe was placed on the tongue. Anesthesia was maintained with IV infusions of alfaxalone (0.16 mg/kg/min), fentanyl (5 µg/kg/hr), and lidocaine (3 mg/kg/hr).

After induction, an oscillometric blood pressure cuff was placed and a side-stream capnograph was connected to the endotracheal tube (ETT). Hypercapnia was noted with an end-tidal carbon dioxide (ETco2) level of 45 to 50 mm Hg. Manual positive-pressure ventilation (PPV) with a peak inspiratory pressure (PIP) up to 12 cm H2O was initiated to achieve normocapnia. At this time, Gigi’s heart rate was 178 bpm and mean arterial pressure (MAP) was 63 mm Hg. Based on her light anesthetic plane, the fentanyl infusion rate was increased to 10 µg/kg/hr and a 0.7 mg/kg bolus of alfaxalone was administered IV. The heart rate decreased to 150 bpm and the MAP remained above 60 mm Hg. A regular spontaneous respiratory rhythm was observed with ETco2 of 37 mm Hg. A catheter was placed in the dorsal pedal artery for continuous invasive blood pressure (IBP) monitoring.

Upon arrival in the interventional radiology suite, Gigi received 0.3 mg/kg of alfaxalone IV based on her light anesthetic plane. The capnograph, pulse oximeter, ECG, temperature probe, and Doppler and IBP monitors were reconnected. Severe hypercapnia was observed with an ETco2 of 76 mm Hg and an inspiratory CO2 (Fıco2) level of 15 to 24 mm Hg. Condensation was noted around the expiratory one-way valve. The ETT was disconnected from the wye-piece; the valve was removed, dried off, and reapplied; and oxygen administration resumed.

Aggressive PPV with 15 cm H2O PIP was initiated; however, no chest wall excursion was noted. There were moderate spontaneous abdominal respiratory efforts with minimal movement of the reservoir bag. Despite previous interventions, the ETco2 remained between 67 and 78 mm Hg with a high Fıco2 associated with the spontaneous breaths. PPV was indeterminant on the capnogram as there was no identifiable inspiratory phase associated with these breaths.

The alfaxalone rate was reduced to 0.14 mg/kg/min to lighten the anesthetic plane. One-lung intubation was ruled out by measurement of ETT depth. It was elected to switch recumbencies from right lateral to sternal to evaluate the quality of Gigi’s chest excursions. To rule out an ETT occlusion, she was extubated, her airway was examined, and she was reintubated with a new ETT; however, the original tube appeared clean. The possibility of a thoracic collapsing trachea was ruled out by advancing the ETT to the estimated level of the carina at the level of the third thoracic vertebra.

Despite these changes, the ETco2 and Fıco2 remained elevated. All other vitals remained within normal limits. The rebreathing system was switched to a non-rebreathing circuit mounted on a different anesthesia machine to rule out increased resistance and machine malfunction, which did not resolve the problem. After discussion between multiple anesthesia personnel, the fentanyl infusion was discontinued and butorphanol (0.2 mg/kg IV) was administered. Within 5 minutes, appropriate thoracic excursions were noted jointly with PPV. Over the next 15 minutes, a decrease in ETco2 was observed from 68 to 49 mm Hg.

Based on the observed clinical signs and successful management of hypercapnia, it was hypothesized that Gigi had CWR caused by the fentanyl infusion. She was placed on a mechanical ventilator on a rebreathing circuit at a respiratory rate of 22 to 25 breaths per minute and a PIP of 12 to 18 cm H2O. Once she was deemed stable, her procedure began and was completed without further complications. She was maintained on mechanical ventilation throughout with an ETco2 of 45 to 48 mm Hg and an Fıco2 of 2 to 3 mm Hg.

Postsurgical radiographs were obtained to confirm occluder placement. During this time, the patient required PPV to maintain normocapnia (FIGURE 1). The alfaxalone and lidocaine infusions were discontinued, and buprenorphine (0.02 mg/kg IV) was administered. During recovery, 100% oxygen at 1 L/min was administered until Gigi resumed strong palpebral and swallowing reflexes. 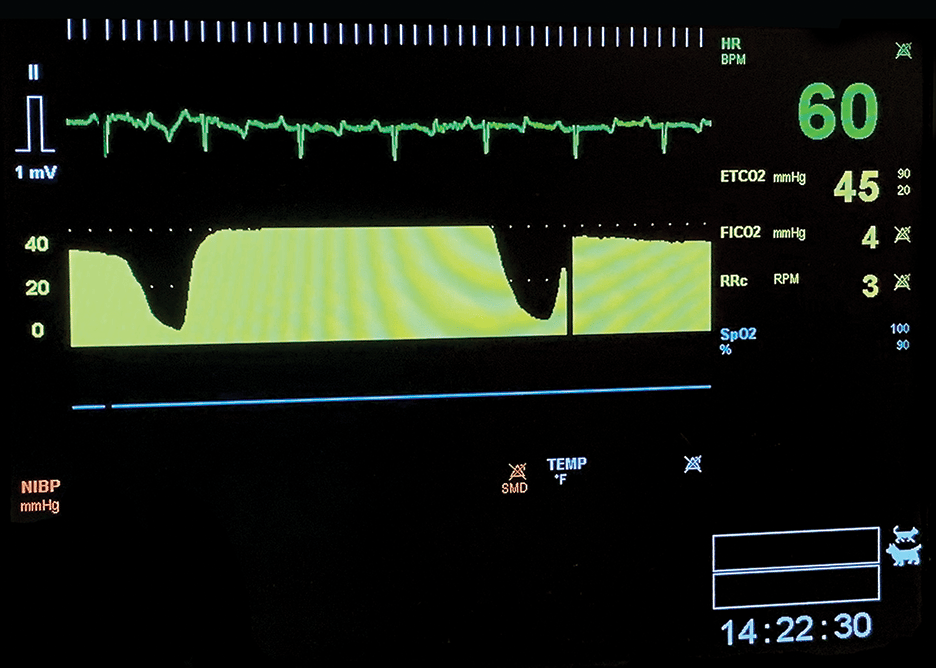 After extubation, the rectal temperature was 96.4 °F (35.8 °C), with a pulse rate of 108 bpm and a respiratory rate of 22 breaths per minute. No increase in respiratory effort was noted; however, flow-by oxygen was continued due to the level of sedation and hypothermia. ECG monitoring revealed a respiratory sinus arrhythmia with singlet VPCs (FIGURE 2) and a MAP of 96 mm Hg. Gigi was transferred to the intensive care unit for monitoring and was discharged the following day. 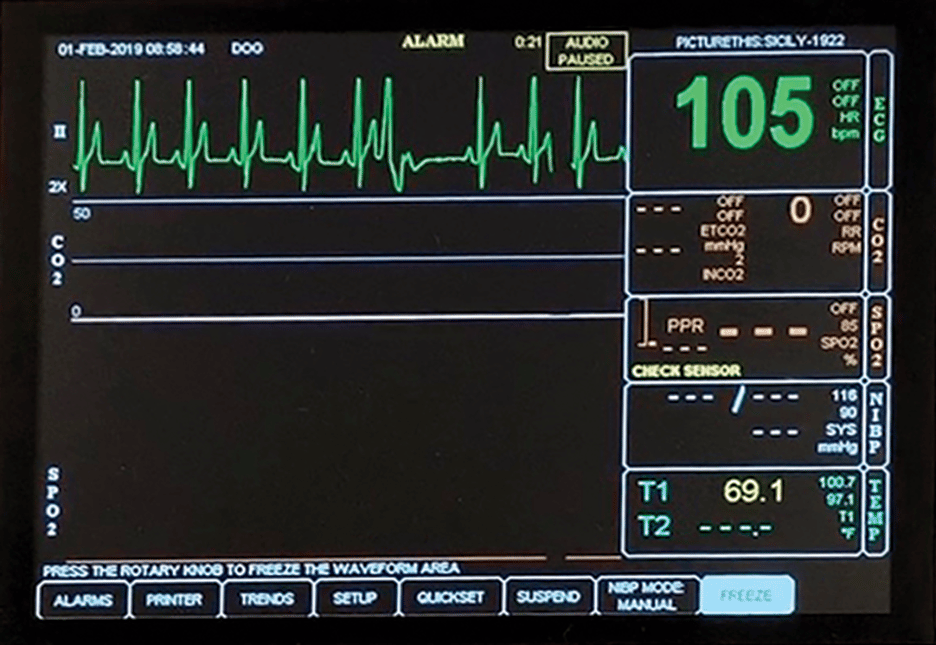 Fentanyl-induced CWR contributed to over 60 000 human overdose deaths in 2017 and 2018.1 This complication was first described in 19532 and has not been studied extensively in veterinary patients. It can be derived from human studies that fentanyl can induce laryngospasm, severe respiratory depression, and CWR in veterinary patients. Occurrence depends on fentanyl dose and the rate of administration.3

Data from rat studies indicate that fentanyl causes respiratory muscle rigidity at least in part through µ opioid receptor agonism in the locus coeruleus, which activates α1 adrenergic receptors in the locus coeruleus and spinal cord, increasing the noradrenergic outflow.4 Fentanyl (and its analogs) also modulates cholinergic receptors in the medullary motor centers that control respiratory mechanics and airway patency.4

Fentanyl causes central nervous system effects such as analgesia, sedation, nausea, vomiting, respiratory depression, and bradycardia. In this case, fentanyl was chosen to provide analgesia and decrease the alfaxalone infusion rate required to maintain anesthesia. Patients with PDAs typically have a low diastolic arterial blood pressure due to the connection between the systemic circulation and the low-resistance pulmonary system. Consequently, the MAP is usually low, leading to decreased perfusion. Vasodilation from high doses of alfaxalone exacerbates this situation.

A study examining the effects of 2 different infusion rates of fentanyl (12 and 48 µg/kg/hr) on CWR in 8 beagles found no effect of either infusion rate.5 The small sample size is a limitation, but based on this study and the lack of case reports in the literature, it can be concluded that CWR is a rare, idiosyncratic adverse effect of fentanyl.

It remains unclear why Gigi experienced CWR, but it can be extrapolated from rat studies that it may have been due to an increase in fentanyl rate and its impact on the medullary motor center in the pons.6 After deliberation, it was decided to administer butorphanol to antagonize the respiratory depressant effects while maintaining a mild amount of analgesia. Otherwise, naloxone, an opioid antagonist, could have been administered, although veterinary studies have shown naloxone may not be effective in reversing this effect.7

In summary, little is known about CWR in veterinary patients and it can prove to be fatal without expert intervention.